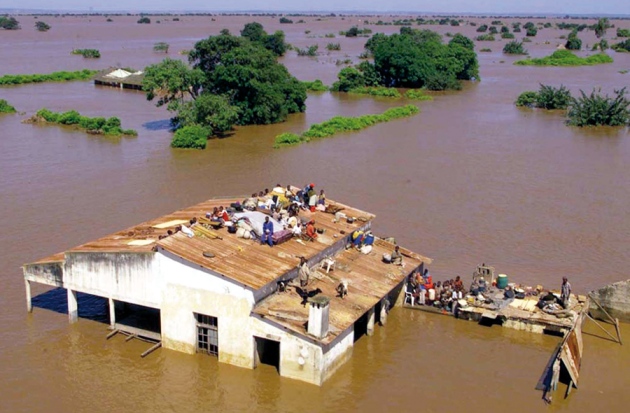 Flood victims wait to be airlifted from a home near the mouth of the Limpopo River in Mozambique last year.

Inupiaq people are watching in horror as climate change claims their homes. Having endured repeated flooding and erosion from sea-ice melting and permafrost thaw, the 400 residents of Kivalina, an Alaskan village on a low barrier island in the Chukchi Sea, voted in 1998 and in 2000 to relocate — together — to coastal sites on higher ground. More than a decade and a half later, Kivalina remains in limbo, its move stymied by institutional, financial and physical barriers1.

No US federal or state agency has a mandate to undertake such mass resettlement, even though the government spent more than US$15 million on erosion control between 2006 and 2009. Kivalina has failed to raise funds through climate lawsuits against oil and gas companies. And it has yet to identify suitable relocation sites. Meanwhile, the village's water-supply and waste-storage systems have been damaged, and it could become uninhabitable within a decade. Tens of thousands of people in more than 85% of Alaska's 213 native villages face similar threats1.

Papua New Guinea, China and Vietnam have already relocated communities that were vulnerable to flooding2. More than a dozen developing countries, including Uganda and Bhutan, have submitted national adaptation plans to the United Nations that involve population resettlement3. Sea-level rise this century threatens the cultural and national survival of several low-lying island nations in the Pacific and Indian oceans4. By 2050, climate-related hazards such as flooding, soil salinization, coastal erosion and droughts could displace hundreds of millions of people around the world from their homes, either temporarily or permanently4.

In many cases, the best way to protect cultures, livelihoods and social links will be to move as a group. Yet population relocation is practically off the climate-policy radar. The United Nations Framework Convention on Climate Change (UNFCCC) did not officially recognize the need for such resettlement until 2010. And science has barely begun to examine the human and environmental drivers, costs and consequences. How severe must a threat — real or perceived — be for people to feel compelled to move? What determines whether they relocate as individuals or together? And how can the social, economic and psychological downsides of population resettlement be minimized?

Social and environmental scientists and policy-makers need to invest in research to better understand and manage such resettlement. Relocation must be incorporated into climate-adaptation policy discussions and funding initiatives in the run-up to the next UNFCCC Conference of the Parties (COP) in Paris in December.

In a Thomson Reuters Web of Science search, we identified just 30 papers that examined climate-induced planned relocations. Most concerned coastal communities that were subject to flooding, even though drought is a greater driver of mass displacement. More than half of the case studies were in Alaska or Mozambique.

By contrast, dozens of papers are published each year on migration of individuals and families. But voluntary, managed resettlement of entire towns and villages may be a more effective way to sustain livelihoods and cultures in some cases. 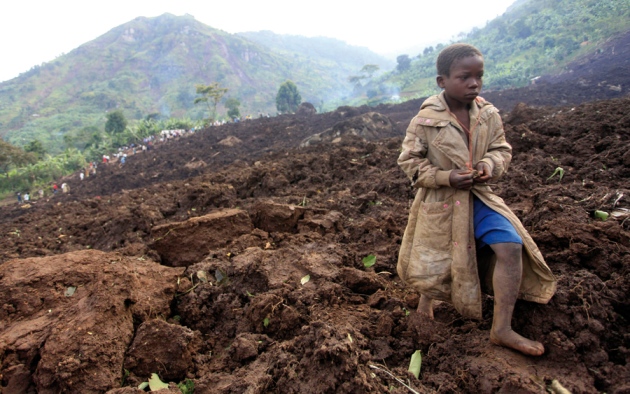 When a landslide in Bududa, Uganda, in 2010 wiped out homes and families, the Ugandan government advised people to evacuate.

That said, relocating communities is fraught with difficulty. In the past 20 years, more than 300 million people have been resettled as a result of conservation, urbanization or development schemes, including dam and road-building, mainly in developing countries5. Most moves faced local resistance and were detrimental to livelihoods, health and well-being3, 5. Remuneration for lost income, land and jobs rarely compensated for reduced access to resources, fractured social networks and emotional trauma2, 3.

Climate-induced resettlement is viewed widely as a last resort2, 4. Many citizens of the Pacific island of Tuvalu6 and of coastal northern Australia7, for instance, are loathe to relocate in the face of sea-level rise and mounting cyclone intensity. Many members of displaced communities return to their homes once the immediate threat has passed2, 5. A few months after Cyclone Eline hit Mozambique in 2000, thousands of evacuated flood victims moved back to the Limpopo River valley, pushed by a lack of jobs in the relocation villages and pulled by memories of having coped with earlier floods8.

What makes people such as the Kivalinans want to move away for good, and together? Migration becomes almost certain once resilience thresholds are crossed — such as insufficient rain for farmers to grow maize (corn) or the disappearance of an island below rising waters. But even the realization of an impending permanent threat may be enough. By the early 1990s, it had become evident to Kivalinans that their way of life would become unsustainable in their current location within decades.

When trying to decide whether to migrate, sociocultural, political and economic concerns usually trump environmental pressures5. The reason most people cite for moving is not to avoid the effects of climate change per se, but to enhance their livelihoods and to remain with family and friends. We expect groups to make judgements along similar lines, while weighing the magnitude of the threat and the resilience of the population.

But cultural and political dynamics could hold even greater sway in decisions related to group resettlement. Cultural systems and traditional livelihoods may be better preserved through relocation than by staying put and defending an existing settlement. Powerful interests, either within or external to the group, can suppress or coerce individual and household mobility. 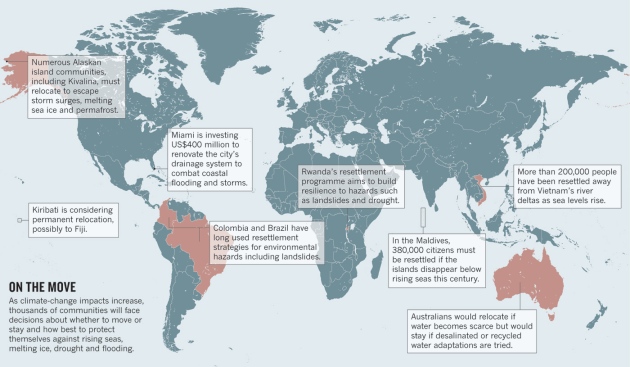 Place and timing matter. Although some communities will stay until the water laps at their doors, others seem poised to proactively relocate. For example, the Pacific island nation of Kiribati and the city of Miami in Florida are both threatened by sea-level rise. But whereas Kiribati is considering permanent relocation, possibly to Fiji, the people of Miami intend to stay put and are investing hundreds of millions of dollars in shoring up sea walls and drainage systems (see 'On the move'). Such disparities need to be understood if the global community is to manage relocation equitably.

Careful planning is needed. Discussions about resettlement in low-lying island states such as the Maldives may seem premature because sea-level rise is unlikely to inundate these regions for several decades. But with their physical survival and cultural sovereignty at risk, the stakes are high. Planning in advance can save time, money and lives.

Communication and negotiation are also important. The value that a community places on resettlement compared with other options such as sea-wall construction, temporary emergency evacuation and disaster relief need to be assessed so that appropriate policies can be chosen2, 5. Coastal cities in the developed world might prefer to invest in flood barriers, for instance. Some vulnerable groups may favour household migration. Temporary measures may be enough when disaster impacts are short-lived or infrequent and emergency relief is available.

Government interventions could fail if officials misinterpret or do not appreciate people's perceptions of risk5, 6, 8. The majority of homes built to rehouse flood-threatened communities elsewhere in Mozambique after Cyclone Eline remained empty because planners underestimated locals' resolve and confidence in dealing with floods, as well as farmers' investment in and reliance on agriculture in the flood plains of their home8.

Institutional and legal systems remain ill prepared for managing relocation in response to climate threats. For example, the US Federal Emergency Management Agency, which provides federal aid for preparing for disasters and for relief and recovery after them, has little power to manage pre-emptive resettlement. It can support community relocation only once disaster strikes, and only in response to a handful of hazards — including drought and hurricanes, but not the severe erosion that threatens Arctic settlements1.

Several international policy initiatives have formed recently to develop resettlement guidelines. For example, the Nansen Initiative led by the Norwegian and Swiss governments is planning a global meeting this year to agree to a set of best practices for dealing with cross-border climate displacement. The Peninsula Principles on Climate Displacement within States, developed in 2013 by a group of scientific and legal experts, provides a similar framework for assisting affected people within national borders9.

These efforts are a start, but they remain scant and underfunded and are years from application.

With the worst impacts of climate change yet to come, there is a window of opportunity. Relocation must be higher on the agenda for global climate research and policy; ways to manage it must champion human rights and improve livelihoods. We recommend beginning with the following steps.

Expand research. A global survey of climate-induced resettlement and the lessons learned is imperative. Analyses of the drivers, consequences and spatial distributions of resettlement at many scales are crucial to crafting informed policy. The UN, World Bank and Group of 8 nations should convene international working groups on climate relocation. Sustained research funding should be provided by nations in amounts that are proportionate to their carbon emissions.

Apply existing international law. Planning must involve the people who will be affected. Guidelines governing the protection of development- and disaster-displaced people, such as the Hyogo Framework for Action, the UN Principles on Housing and Property Restitution for Refugees and Displaced Persons and the World Bank Guidelines on Involuntary Resettlement, must be applied universally2, 9. The global community must promote the goals of the Nansen and Peninsula initiatives: to avoid permanent relocation where possible, and to safeguard the needs and rights of people who are displaced by climate change.

Address constraints to resettlement. Countries should examine whether their institutional and legal systems are flexible enough to respond to relocation threats — internally and internationally — swiftly, successfully and comprehensively. States will need to adapt laws on disaster declaration and recovery to cover a broader range of environmental hazards, identify funding sources and address climate change within policies on housing, migration and natural-disaster response3.

Improve adaptation financing. Funding is often an obstacle, even when everyone agrees that relocation is the best option. And resettlement projects are expensive. Billions of dollars will be needed to support the relocation of people in low-income countries. The UN member states that are responsible for the bulk of carbon emissions should bear the greater burden of this cost.

In December, the world's climate activists and policy-makers will convene in Paris for the 21st COP for the UNFCCC. There, a global strategy for climate relocation should be developed — for identifying it, understanding it and managing it, equitably.