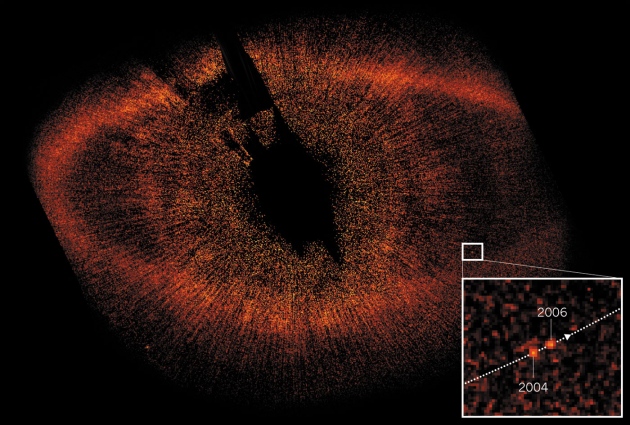 Astronomers using the Hubble Space Telescope to study the dust-shrouded star Fomalhaut (main image) hope to determine whether a bright point seen in 2004 and 2006 is a planet orbiting the star (arrow, inset).

Twinkle, twinkle, little spot: are you a real world or not? Pinning down the elusive nature of Fomalhaut b, a faint speck of light discerned within the glare of a nearby star, has proved to be far from child’s play. At stake are bragging rights to the first optical image of an exoplanet, and one that is close enough to be studied in detail. But since Fomalhaut b was first reported in 2008, its identity has been the subject of intense debate. The next round of Hubble Space Telescope observations, scheduled to begin on 27 May, could help to resolve the controversy.

Located a mere 7.7 parsecs (25 light years) away, the star Fomalhaut has captivated planet hunters since the mid-1980s, when infrared observations revealed that it is surrounded by dust — a possible signal of a recently formed solar system. In 2005, after further study showed that the dust took the form of a narrow band with a sharp inner edge, astronomer Paul Kalas of the University of California, Berkeley, and his colleagues suggested that a planet’s gravity was shaping the dust’s structure1.

Proof seemed to come in 2008, when Kalas and his collaborators reported that Hubble observations of the Fomalhaut star system nearly 2 years apart revealed a spot that shifted position, as would be expected of a body orbiting just inside the dust band’s inner edge2. From its brightness, they proposed that the object, Fomalhaut b, is a planet roughly half the mass of Jupiter. That would make it the first exoplanet to be directly imaged in visible light rather than through indirect effects, such as a wobble of the parent star. NASA was quick to flag the milestone with a public announcement.

But because of the star’s extreme brilliance, says Kalas, “everything you see, even the dust belt, is extremely difficult to image”. And puzzling details in the data left the matter far from settled. By the time of the second Hubble observation, in 2006, Fomalhaut b had faded to half the brightness observed in 2004 at an optical wavelength of 0.6 micrometres. Even more troubling, a preliminary search for the object in the infrared — the part of the spectrum in which newborn planets are expected to glow the brightest — failed to reveal anything.

Efforts to learn more were thwarted in January 2007, when the camera channel used by Hubble to acquire the image stopped working. Instead, in 2010, Kalas made a third set of observations using the older Space Telescope Imaging Spectrograph on Hubble. Those results suggested that the object is heading into the dust band — not the path expected for a planet sculpting the band’s inner edge. Earlier this year, another team reported that NASA’s infrared Spitzer Space Telescope had failed to detect the body at all3. And on 27 April, a modelling study showed that a star might form a narrow band of dust without needing a planet to shape it4.

“There could still be a planet there, but the light detected has to come from something else, most likely from scattering of starlight by a large cloud of dust,” says astronomer David Lafrenière of the University of Montreal in Quebec, Canada, who is a co-author of the Spitzer study.

Lafrenière notes that another recent study supports that idea. Images from the European Space Agency’s Herschel Space Observatory reveal that the band around Fomalhaut is packed with fine dust, which the star’s radiation pressure continually sweeps into inter­stellar space. For the dust band to be maintained, the study authors conclude, the equivalent of 2,000 one-kilometre-wide comets must be destroyed in the ring every day. Such destruction could create a compact cloud of dust that would shine like the object seen by Hubble, says Lafrenière.

Adding to the intrigue, Christian Marois and Raphaël Galicher of the Herzberg Institute for Astrophysics near Victoria in British Columbia, Canada, have reanalysed the original Hubble data and say they cannot confirm that Fomalhaut b has faded or that it is veering into the dust band. Marois adds coyly that a much bigger surprise could be lurking in the analysis, but he won’t unveil details until mid-June, when Kalas plans to release the results of the next Hubble observations.

Those spectrograph images should help to pin down the orbit of Fomalhaut b and whether it varies in brightness, Kalas says. But to determine whether the object is truly a planet, he adds, Hubble will have to monitor it for several more years to see whether it behaves as a planet, a dust cloud or something else.

Some researchers, however, have already consigned Fomalhaut b to the dustbin. “Some people are bending over backward to keep the planet alive. There’s no justification any more,” says Ray Jayawardhana, an astronomer at the University of Toronto in Ontario, Canada. Along with Lafrenière and other collaborators5, he is co-discoverer of another object, J1609, which he says is the first true exoplanet to be imaged directly.

Over to you, Hubble.