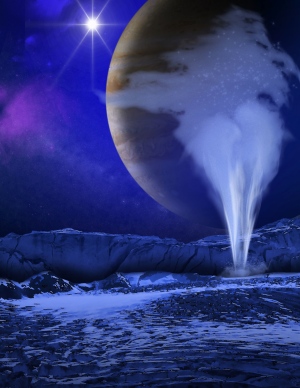 The plumes detected on Europa by the Hubble Space Telescope may be 200 kilometres tall, as depicted in this artist's impression.

The jets resemble the giant icy geyser seen on Saturn’s moon Enceladus. Plumes on Europa could be even more exciting because they hint at the ability to tap a subsurface habitat that might even harbour extraterrestrial life.

“If this pans out, it’s potentially the biggest news in the outer Solar System since the discovery of the Enceladus plume,” says Robert Pappalardo, a planetary scientist at the Jet Propulsion Laboratory in Pasadena, California, who was not involved in the research.

The work, reported today in Science1, comes with plenty of caveats. Although previous theoretical work suggested that plumes could exist on Europa, earlier tantalizing hints of them have come to nothing. This time, Hubble spotted the potential plumes in just one observation. And if they do turn out to be real, the plumes might not even be connected to the moon's deep subsurface ocean.

“It’s a first-time discovery, and we need to go back and look some more,” says team member Joachim Saur, a planetary scientist at the University of Cologne in Germany.

Saur and his colleagues have looked for Europan plumes before, to no avail2. In 2012, the group decided to take another shot. Using an ultraviolet camera on Hubble, they scrutinized Europa once in November and once in December of that year. The November study found nothing, but the 2.7-hour exposure in December spotted blobs of hydrogen and oxygen near Europa’s south pole.

Their size, shape and chemical make-up is best explained by two plumes of water vapour roughly 200 kilometres high, says team leader Lorenz Roth, a planetary scientist at the Southwest Research Institute in San Antonio, Texas. That is many times the height of potential Europa plumes calculated by some theorists3. It would mean that Europa's jets reach higher than the volcanic eruptions on Jupiter’s moon Io, but not as high as the towering plume that spouts from Enceladus.

Roth’s team spotted the plumes when Europa was at its greatest distance from Jupiter. Changing stresses in the moon's crust, caused by tidal forces between the moon and planet, may explain why the researchers didn't see any plumes in the November observation when Europa and Jupiter were close. “Maybe Europa is just burping once in a while,” Pappalardo says.

It is possible that the plumes may not tap into the deep subsurface, says Saur. The frictional heat of ice rubbing against itself might melt parts of the icy crust and feed the plumes.

Either way, the discovery could be a shot in the arm for upcoming missions. In 2022, the European Space Agency is planning to launch a probe that would explore Europa as well as Jupiter and its other moons. And Pappalardo leads a mission concept team at NASA that is outlining a possible US spacecraft to Europa.