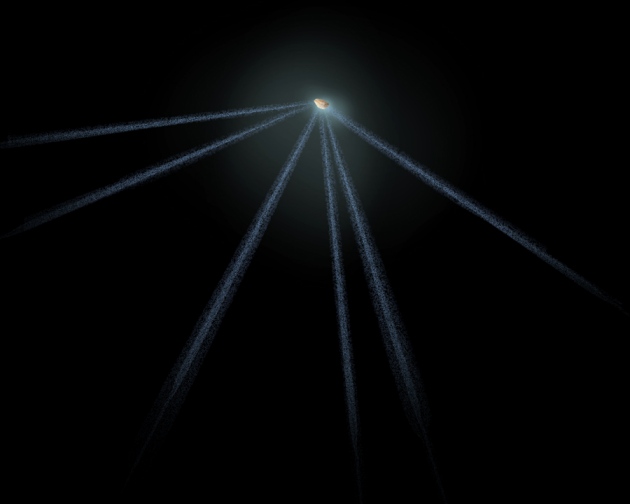 Artist's impression by NASA, ESA, and A. Feild (STScI)

Rotational break-up of the asteroid P/2013 P5 may have produced comet-like tails.

For the denizen of the inner asteroid belt known as P/2013 P5, breaking up isn’t hard to do. At least that’s the favoured explanation for why the spinning object, which has an asteroid-like orbit but a comet-like appearance, is belching six tails of dust into space like a cosmic lawn sprinkler.

“I’ve observed lots of comets and I’ve never seen anything as weird as this one,” says planetary scientist Harold Weaver of the Johns Hopkins Applied Physics Laboratory in Laurel, Maryland.

He and his colleagues suggest that the rotation rate of P/2013 P5 has been revved up by the absorption and re-emission of sunlight shining on the spinning, asymmetric body. If the resulting forces spin it fast enough, its low gravity can no longer keep the body intact and its surface crumbles, spewing streams of dust into space.

Typical comets contain large amounts of water ice, and their tails are generated when heat from sunlight releases water vapour and other gases, which also drag dust out along with them. But the researchers say that the location of P/2013 P5 makes it a likely member of a family of asteroids that are water-poor.

Weaver and his colleagues describe the unprecedented observations, first recorded by the Hubble Space Telescope on 10 September, in an article posted on the arXiv preprint server on 7 November1 and due to be published in Astrophysical Journal Letters. 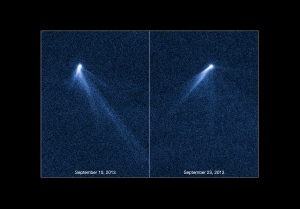 The six tails seem to have been created during six separate dust-ejecting events, which probably began this past spring, says Weaver. A collision with another space rock is unlikely to have generated the tails because such an impact would have spewed out all the dust in a single event, the team argues.

The proposed rotational break-up may be a key death mechanism for asteroids, Weaver suggests.

Planetary scientist William Bottke of the Southwest Research Institute in Boulder, Colorado, calls the observations “cool” but adds that the break-up scenario, although plausible, “is far from proven”. The researchers would have a more convincing case if P/2013 P5 had a measured rate of rotation, he says. It is possible, Bottke adds, that the asteroid has a deposit of near-surface ice, which could have produced the dust tails when heated by sunlight.