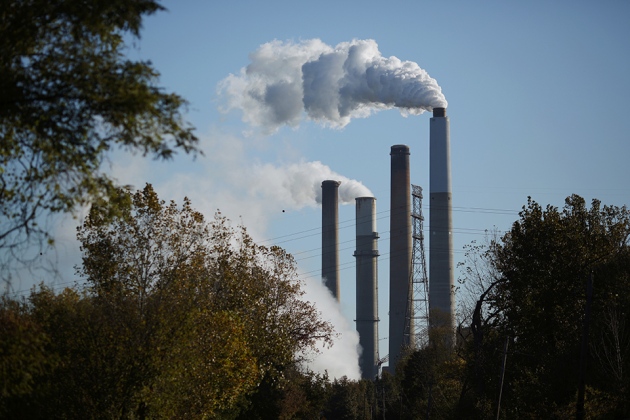 US President Donald Trump signed a sweeping executive order on 28 March that aims to dismantle his predecessor's climate policies. The long-anticipated document directs the US Environmental Protection Agency (EPA) to repeal curbs on power plants' carbon emissions — policies designed to help the United States meet its commitment under the 2015 Paris climate agreement.

“My administration is putting an end to the war on coal,” Trump said during a signing ceremony at EPA headquarters, flanked by coal miners. “We'll have coal, really clean coal.”

The Trump order also sets the stage for a broader rollback of federal climate rules, including efforts to prepare for the effects of rising temperatures and shifting weather patterns and to account for the costs of global warming when writing regulations.

Nature looks at the potential impact of the directive, and what comes next.

Which regulations does Trump want to repeal?

The biggest target is the Clean Power Plan, which was designed to curb carbon dioxide emissions from power plants by lowering demand, deploying low-carbon energy sources or increasing the efficiency of existing fossil-fuel power plants. The plan aims to reduce the power sector's CO2 output by 32% below 2005 levels by 2030.

Trump's order directs EPA chief Scott Pruitt to “suspend, revise, or rescind” rules governing emissions from new and existing power plants, which could take years. The Clean Power Plan has been on hold since February 2016, pending a legal challenge from 27 states.

The White House order repeals Obama directives that required federal agencies to consider climate change when writing regulations and issuing permits for major infrastructure projects, including pipelines and highways. This consideration has often included estimating the ‘social cost of carbon’ — a measure of the long-term economic impact of greenhouse-gas emissions, which the Obama administration used to justify many climate regulations.

What about the Paris climate agreement?

Although Trump has vowed to pull the United States out of the Paris climate agreement, the executive order does not deal with the issue.

A White House official said on 27 March that no decisions have been made, although the administration is planning to move in a new direction on climate change. “We have a different view of how you should address climate policy,” the official said.

Yes — and those lawsuits could delay or even reverse any changes to federal climate rules.

If the EPA moves to repeal the Clean Power Plan, the agency would probably spark legal challenges over its role in addressing greenhouse-gas emissions. The US Supreme Court ruled in 2007 that the agency could regulate the gases under the Clean Air Act. Two years later, the EPA issued an 'endangerment finding' that declared such emissions a threat to human health and the environment — and obligated the agency to regulate them. Environmentalists and some progressive states will surely challenge the agency if it backs away from that role.

What doesn’t the executive order do?

It does not suggest that the administration is attempting to overturn the endangerment finding, which may come as a relief to many scientists and environmentalists.

Although Pruitt said during his Senate confirmation hearing in February that the EPA has a role in regulating CO2 emissions, he has since questioned whether his agency has the authority to do so under the Clean Air Act. He also challenged the finding in his previous job, as Oklahoma attorney-general.

But overturning the endangerment finding would require the EPA to produce a scientific analysis supporting the idea that greenhouse gases do not pose a threat to human health and the environment. This would go against decades of fundamental climate science, and would itself prompt legal challenges.

The Trump administration may be looking to limit the endangerment finding, however. During a 27 March briefing, one White House official questioned whether the finding should continue to apply to all greenhouse-gas emissions. The official suggested that the finding may apply only to emissions from vehicles — the subject of the lawsuit that led to the Supreme Court’s 2007 ruling.