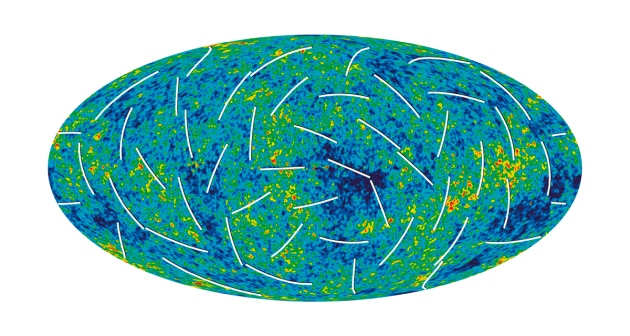 The cosmic microwave background sky, here mapped by NASA's Wilkinson Microwave Anisotropy Probe, has a polarization, represented by white bars. Future experiments might measure the polarization with enough sensitivity to prove the existence of gravitons, the quanta of gravity.

Can a quantum of gravity ever be detected? Two physicists suggest that it can — using the entire Universe as a detector.

Researchers think that the gravitational force is transmitted by an elementary particle called the graviton, just as the electromagnetic force is carried by photons. But most of them despair about ever recording individual gravitons. That is because gravity is so weak that any interactions between gravitons and matter are thought to be beyond human ability to detect in the foreseeable future.

Some physicists, including Freeman Dyson at the Institute for Advanced Study in Princeton, New Jersey, have gone further and claimed that building a graviton detector may actually be physically impossible. Several kinds of detectors have been proposed, but they would fail owing to a combination of instrumental and quantum noise, Dyson said at a conference in Singapore last month in honour of his 90th birthday.

Einstein's general theory of relativity predicts the existence of ripples in space-time, known as gravitational waves, and physicists assume that these waves would be made of gravitons, just as electromagnetic waves are made of photons. But Dyson argued that the standard approach to searching for gravitational waves — by bouncing light off a set of mirrors to measure tiny shifts in their separation — would be hopeless for detecting gravitons: To be sensitive enough to detect the miniscule distance change due to an individual graviton, the mirrors would have to be so heavy that they would collapse to form a black hole.

But in a paper posted on the arXiv preprint server on 20 September1, Lawrence Krauss, a cosmologist at Arizona State University in Tempe, and Frank Wilczek, a Nobel-prizewinning physicist at the Massachusetts Institute of Technology (MIT) in Cambridge, consider whether the existence of gravitons — and the quantum nature of gravity — could be proved through some expected, but yet-to-be detected, features of the early Universe.

In the standard theory of cosmic birth, the universe underwent a dramatic growth spurt known as inflation during the first fraction of a second of its existence. Based on Einstein's general theory of relativity, inflation would generate gravitational waves, which stretch space-time along one direction while contracting it along the other. That would affect how electromagnetic radiation — including the cosmic microwave background (CMB) left behind by the Big Bang — travels through space, causing it to become polarized. Researchers analysing results from the European Space Agency’s Planck satellite are searching for this imprint of inflation in the polarization of the CMB.

If that is so, finding the fingerprint of gravitational waves in the polarization of the cosmic microwave background “may be the first empirical test that gravity must be quantized”, says Krauss.

The result, although implicit in previous studies, “is not generally recognized”, says Krauss. He and Wilczek emphasize that rather than making any new predictions or novel calculations, “we are merely bringing to the fore an implication of existing results that seems particularly noteworthy".

Because the inflation-derived gravitational waves can be traced back to individual gravitons, “what we finally hope to detect is the signal from a single graviton amplified by the [expansion of the] Universe into something detectable”, says Wilczek. “The Universe is acting as our experimental device.”

“Thus, if we see convincing observational evidence from the cosmic microwave background polarization measurements that these gravitational waves exist, then we will have strong evidence that gravity really is quantized,” he says.

The work does not convince Stephen Boughn, a theoretical physicist at Haverford College in Pennsylvania who has co-authored a report2 agreeing with Dyson’s conjecture that gravitons may be impossible to detect. “The authors point out that the magnitude of the effect depends on Planck’s constant; however, it depends on other inflationary parameters as well,” he says. “It's my impression that there is certainly enough slack in inflationary theory and quantum gravity so that, whatever the observed level of polarization, these theories can be made to fit the observations.”

Still, says Wilczek, “for all the noise and the smoke” about trying to unify quantum theory and gravity, “there’s been very little fire sighted”. The polarization imprint “might be a chance to see a few sparks”.