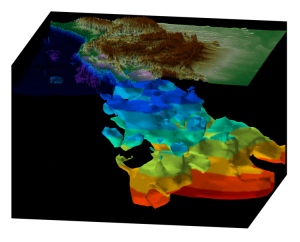 Peering deep below North America at buried rock slabs, geophysicists are rewriting the ancient history of the continent's western edge.

For decades, geologists have thought that the mountain chains running from Alaska to Mexico were created from fragments of land scraped off a huge eastward-moving crustal plate, called the Farallon, that converged with North America and sunk below it over the past 200 million years or so. But a study published today in Nature1 suggests a different scenario. Arcs of islands, like those in today's western Pacific, may have piled atop one another, sinking and forming buried slabs. Then, as North America moved westward, it scraped off the tops of these slabs, raising mountains in the process.

“This is an important, even momentous, paper,” says Eldridge Moores, a geologist at the University of California in Davis, who proposed a similar westward-diving crustal motion, or subduction, for western North America in 1970 (ref. 2). “I’m really glad to see it.”

The latest study comes from Karin Sigloch, a seismologist at Ludwig Maximilians University in Munich, Germany, and Mitchell Mihalynuk, a geologist at the British Columbia Geological Survey in Victoria, Canada. The researchers used seismic data to create three-dimensional images of the subducted slabs deep below the continent.

Those slabs appear as several massive, nearly vertical walls extending from 800 to 2,000 kilometres below the surface of western North America, the scientists found. In earlier work3, Sigloch and her colleagues showed that the biggest of these slabs was not connected to the plate now subducting beneath the US Pacific Northwest. The finding raised a red flag: Though geologists long thought that subducting plate was the last remnants of the Farallon, the new data showed the biggest buried slab wasn't connected to the Farallon at all.

Sigloch and Mihalynuk then compared their seismic-slab images with plate reconstructions — geological jigsaw puzzles that describe how crustal plates best fit together. Those reconstructions also confirmed that something was wrong with the usual picture.

“It was geometrically just not possible,” says Sigloch. “The more we saw, the less sense it made.”

Instead, she and Mihalynuk came up with a different scenario that may have taken place between about 200 million and 50 million years ago. Island arcs to the west of North America began crashing into the continent, piling atop one another.

North America then began moving westward, pushed by the spreading of the Atlantic Ocean to its east. It overrode the islands, some of which piled onto the continent and some of which sank deep beneath it to form the slabs. Finally, oceanic crust began subducting eastward under the continent, in the configuration geologists see today.

Sigloch says that the scenario solves some longstanding questions, such as why the buried slabs are piled vertically rather than at an angle.

“A lot of things are just simpler now,” she says.