A year after the Rosetta space mission went into orbit around a comet shaped like a rubber duck, scientists say that they have worked out how the dusty iceball got its shape — although they haven't ironed out every detail.

The comet 67P/Churyumov–Gerasimenko probably formed from two distinct pieces — a small head on a large body — rather than through the erosion of a single body into a duck shape, according to an analysis to be published in Astronomy and Astrophysics and available at the arXiv preprint server1.

How the two parts came together is still up for debate. But the paper suggests that the pieces are probably fragments from a once-larger comet that was smashed apart by a collision. Its alternative hypothesis is a gentler story: two small proto-comets, formed a few million years after the Solar System arose, joined together. 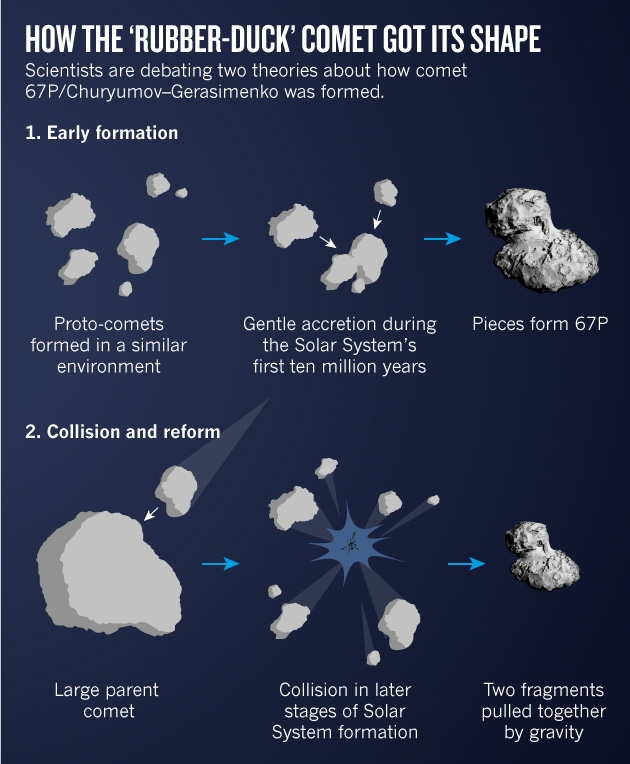 “We have a lot of data showing that the comet is likely to be made of two bodies. The big question is how these two bodies came together, and we don’t know yet,” says Jean-Baptiste Vincent, a planetary scientist at the Max Planck Institute for Solar System Research in Göttingen, Germany, who was not involved with the paper.

Tales from the crib

The tale behind the comet's duck-like shape is not merely a 'Just So' story. It could have implications for the evolution of the Solar System, says Simone Marchi, a planetary scientist at the Southwest Research Institute in Boulder, Colorado, one of the study's authors. In their paper, Marchi's team show that, given what scientists assume about the early Solar System, it would have been fraught with collisions — and the environment around comet 67/P is unlikely to have been an exception. So if 67/P grew from two small proto-comets without experiencing such a collision, this could hint that assumptions about early Solar System conditions are wrong.

It seems clear that the comet is composed of two separate parts. Terrace-like features on each cometary lobe — as imaged by the Rosetta orbiter — line up within the head or the body, but do not match up in orientation across the two pieces, as they would if the comet had been eroded from one larger object. A set of near-parallel cracks on one region of the comet's head are best explained by the coming-together of two comet pieces, say the authors. And an earlier study2 found it very implausible that one large comet could have been eroded into a duck-like shape by sunlight burning gas and dust away.

The comet’s two lobes are fairly similar in composition, which suggests that they probably formed in the same environment. That fits both of the two-body scenarios, but given the likelihood of collisions, Marchi’s team argues for the hypothesis that the two parts are fragments from a once-larger comet. However, evidence from the comet itself could yet favour the idea that two proto-comets joined up, says Vincent.

A comet whose parent body was once subject to a collision, for instance, should be compacted and show fewer voids in its interior than would a pristine comet, he says. “We’re looking at our data now and trying to see which model is supported.”