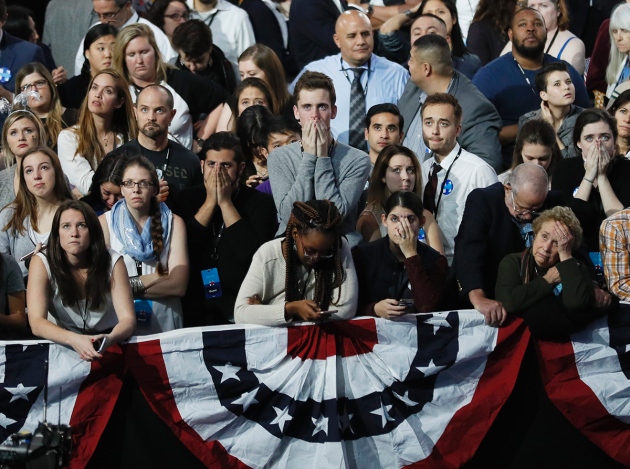 Supporters of defeated presidential nominee Hillary Clinton were disappointed at the US election results — as were many scientists.

Nature rounds up reaction from researchers to Donald Trump's election as the next US president. Trump, a Republican, had trailed his Democratic opponent, Hillary Clinton, in polls leading up to the 8 November election day, but pulled out a surprising victory.

Some foreign researchers working in the United States started thinking about leaving the country.

@NatureNews this is terrifying for science, research, education, and the future of our planet. I guess it's time for me to go back to Europe

@NatureNews As a Canadian working at a US university, a move back to Canada will be something I'll be looking into

Around the world, researchers expressed sympathy and wondered how the election results might upset US research.

"I feel sad for the United States and its scientists, and would like to welcome good scientists to work and live in China." —Yi Rao, a neuroscientist at Peking University.

"I have heard too many negative things about this very first 'anti-science' US president, however, as a scientist, I would avoid predicting the unpredictable. Sometimes, people under unfavourable situations can do good science as well. it may force us to choose more significant research projects, more fundamental scientific questions to tackle, not just follow the flow of funding." —Can Xie, a biophyicist at Peking University.

Other researchers said they were scared that a Trump presidency might reduce funding for science.

@NatureNews I do breast cancer research for my PhD....Scared not only my future but for the future of research and next years @NIH budget😱.

ps my heart is *breaking* for all the young scientists I helped to teach and raise.

Some researchers expressed concern over the future of climate science.

"With a climate skeptic as President and a creationist as vice-president, scientists can only be worried." —Albert Descoteaux, a biologist studying host-parasite reactions at McGill University in Montreal, Canada.

"President-elect Donald Trump's stance on global warming is well known. Science cannot expect any positive climate action from him. The world has now to move forward without the US on the road towards climate-risk mitigation and clean-technology innovation." —Hans Joachim Schellnuber, director of the Potsdam Institute for Climate Impact in Germany, in a press statement.

"The kind of work we are doing here [at the United Nations' COP22 climate meeting] today takes a new importance right now. Political events do not and cannot change the reality of climate change." —Philip Duffy, president of the Woods Hole Research Center in Falmouth, Massachusetts.

And some scientists had more existential worries.

"Unlike the day after the EU referendum vote, when I was bitterly upset, I just feel numb today. I don't know if that is a kind of despair settling in because despair is precisely the wrong type of reaction to Trump winning the presidential election. Throughout the campaign he showed himself to be a facist and racist, who bragged about his mis-treatment of women. He showed scant regard for truthfulness and espoused denialist views on climate change. It seems unlikely that the scientific and research prowess of the USA will flourish under such a president." —Stephen Curry, a structural biologist at Imperial College London.

"I am confused, angry, depressed. I feel much like I do when I receive the comments on a rejected paper that the reviewers have torn apart. This morning I realized that I don't actually know a Trump supporter who I could talk to about the election. How can I reach the public if I'm only speaking to my own circle?" —Peter Peregrine, an anthropologist at Lawrence University in Wisconsin and the Santa Fe Institute in New Mexico.

With reporting by Nature staff.

This story has been updated with further reactions from scientists around the world.