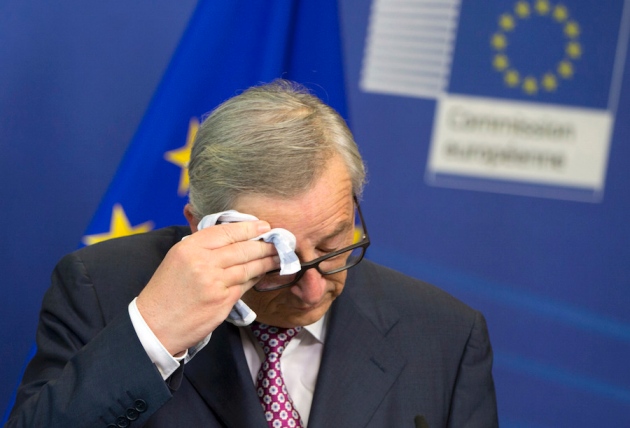 European Commission President Jean-Claude Juncker wipes his brow at a media conference ahead of the UK's referendum on the EU.

Nature rounds up reaction from institutions and researchers across the world to the United Kingdom's historic vote to leave the European Union.

Emily Morris is a PhD student working on plant root development at the University of Nottingham, UK:

“I am 9 months into my PhD and this result makes me terrified about my future in science. Many people are commenting that young researchers would be better off moving away from the UK now. The atmosphere in the lab today is depressing. A day of grieving should be allowed but I hope by Monday scientists will be discussing initiatives to save UK science rather than how to jump ship.”

@NatureNews Myself and so many colleagues rely on EU funding. Devastated that it has come to this.

Anne Glover is Dean for Europe at the University of Aberdeen, UK, and former EU chief scientific adviser:

“I am personally heartbroken and I have great concern for the future of British science, engineering and technology. Our success in research and resulting impact relies heavily on our ability to be a full part of European Union science arrangements and it is hard to see how they can be maintained upon a Brexit."

@NatureNews Waiting to see consequences over the next few months but am considering transfering my fellowship to France #EURefResults.

Christian Möstl studies physics at the Space Research Institute of the Austrian Academy of Sciences in Graz, Austria:

“While collaborative funding may get much more difficult, researchers from the EU should collaborate with their UK colleagues like we've always done it and like we don't care about this result. Even more so now. I work in space and astrophysics and I am currently participating in an EU-funded FP7 project on the prediction of solar storms, led by the UK’s Rutherford Appleton Laboratory. The Brexit directly affects us, as we are planning on a follow-up project and now have no idea if that is even possible.”

Robert Lechler is president of the UK's Academy of Medical Sciences in London:

"This is a very disappointing outcome for medical science. The scientific community needs to send a strong message that we are still open for business. As part of this, research will need access to funding sources to replace those put at risk by exiting the EU, as well as clear plans to maintain access to European research talent and mechanisms for scientific collaboration.”

@NatureNews Next year I'm coming to Uk thanks to the Erasmus Programme. Now I'm not so sure about it...

Wendy Piatt is director-general of the UK's Russell Group of universities:

“Leaving the European Union creates significant uncertainty for our leading universities but we will work with the government to minimize any disruption caused by this decision. The UK has not yet left the EU so it is important that our staff and students from other member countries understand that there will be no immediate impact on their status at our universities. However, we will be seeking assurances from the government that staff and students currently working and studying at our universities can continue to do so after the UK negotiates leaving the EU."

@NatureNews I am managing EU funded research: Britain will most likely experience brain drain, back to where EU researchers feel supported.

.@NatureNews as far as science is concerned #Brexit is a catastrophe. Joined EU funding, H2020, Erasmus, and collaborations are to collapse

Vanessa Sancho-Shimizu studies childhood infectious diseases at Imperial College London, and has been an EU-funded Marie Curie research fellow since 2008:

"I'm shocked and thoroughly disappointed. I was on a career panel only yesterday singing the praises of the UK as a wonderful place of opportunity for young scientists and I feel like that has changed overnight. The only reason I'm here is because EU finding brought me over. It's devastating for science."

Gary McDowell is the executive director of The Future of Research, a non-profit foundation in Massachusetts, USA:

"Already I'm discussing with UK citizens postdoc’ing and studying in the United States the harsh reality of this new situation, and how this will make a science funding system already strained into an unworkable mess. I feel many now will not return and a brain drain is inevitable.”

On the bright side, my EU grant is paid in Euros so our consumables budget is getting bigger by the second (in GBP). #tryingtobepositive