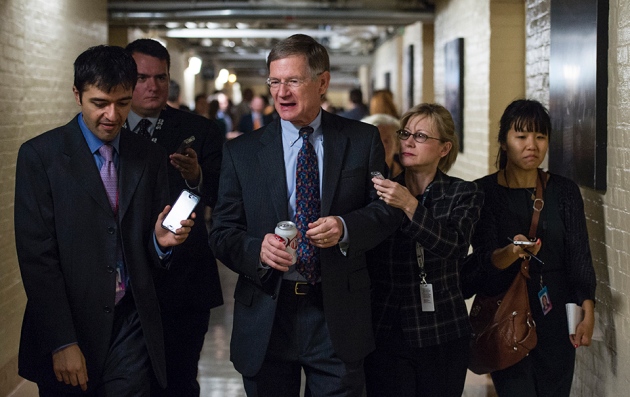 Lamar Smith has made his mark on science. As chairman of the US House Committee on Science, Space, and Technology, the Texas Republican has launched dozens of investigations into alleged wrongdoing by scientists, environmental groups and government officials. And he shows no signs of slowing down.

Since 2013, Smith has probed everything from individual National Science Foundation grants to government air-quality regulations — issuing an unprecedented 24 subpoenas along the way. And although the Republican presidential candidate, Donald Trump, is foundering in the polls, the party is poised to retain control of the House of Representatives in the 8 November election. That means that Smith is likely to remain at the helm of the science committee for at least two more years.

“Members of the committee seem to be somewhat perplexed that we got to this point.”

Whatever the future brings, one thing is clear: the panel has shed its long-standing reputation as a bastion of collegial, bipartisan debate. “This committee is a microcosm of Congress as a whole,” says David Goldston, who served as chief of staff to former chairman Sherwood Boehlert (Republican, New York) from 2001 to 2006. “Things have gotten ever more polarized, and at some point, the science committee wasn’t going to be an exception.”

Although he won the chairmanship four years ago, Smith didn’t shift his investigations into high gear until 2015. That’s when the committee voted along party lines to grant him unilateral authority to issue subpoenas — a powerful tool to compel witness testimony or access to sensitive documents.

At that point, the panel had not issued a subpoena since the early 1990s, when it probed safety and pollution violations at a US government nuclear-weapons facility in Colorado. But Smith has taken liberal advantage of his new authority, aided by an influx of staff recruited from another House committee that specializes in investigations.

“It’s just been one case after another,” says Representative Eddie Bernice Johnson of Texas, the highest-ranking Democrat on the panel. “Members of the committee seem to be somewhat perplexed that we got to this point.”

But the panel’s Republican staff says that such complaints are sour grapes, and note that Smith has sought a role for Democrats in several probes. “There is a knee-jerk reaction — no matter what investigation it is — to criticize the majority,” says Mark Marin, the Republican staff director for two of the science panel’s subcommittees.

Many of Smith’s highest-profile investigations have targeted the science underlying global warming and policies intended to reduce greenhouse-gas emissions. Last year, he sought to compel the US National Oceanic and Atmospheric Administration (NOAA) to release documents related to a study that disputed the idea of a global warming ‘pause’ around the turn of the twenty-first century (T. R. Karl et al. Science 348, 1469–1472; 2015). Smith suggested that NOAA scientist Thomas Karl had altered data to advance an “extreme climate-change agenda”, which drew a sharp rebuke from the agency and science organizations.

In July, Smith subpoenaed the attorneys-general of New York and Massachusetts over their push to determine whether oil giant Exxon Mobil misled investors about the financial liabilities posed by climate change. Smith, who has accused the state officials of trying to stifle legitimate scientific debate, is seeking documents and other communications regarding the states’ probe. He has also issued subpoenas to eight environmental groups that have sought to determine whether fossil-fuel companies knowingly spread false information about climate science.

Smith declined Nature’s request for an interview. In a statement, he said that his investigations are meant to defend the “freedom of scientific inquiry” — and the interests of taxpayers. “I plan on carrying out my responsibility to protect the First Amendment rights of scientists and continuing our constitutional oversight responsibility,” he wrote.

Thus far, many of Smith’s subpoenas have come to naught. In some cases, such as the Exxon probe, the committee’s targets have argued that Smith has overstepped his constitutional authority. The Massachusetts and New York attorneys-general and the eight environmental groups have declined to comply with the science panel’s subpoenas. In the case of the NOAA climate study, the agency briefed the committee and provided some documents, but withheld internal communications between its scientists.

To enforce a disputed subpoena, the full House would need to vote in favour of holding the recipient in contempt of Congress by the end of the year — an unlikely scenario.

Nonetheless, Smith can start afresh when the new Congress convenes in early 2017. Marin hints that this is likely for the Exxon probe, at least. “The chairman is interested in continuing this investigation until he gets what he is looking for,” he says.