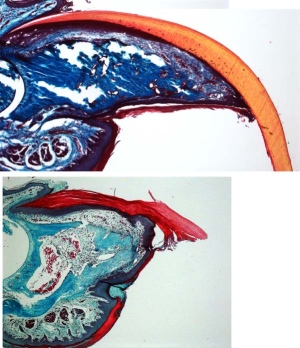 Digit tips, including bone, can regenerate by 5 weeks after amputation in normal mice (top). But the regeneration failed in mice that lacked a crucial signalling pathway (bottom).

If a salamander loses its leg, it can grow a new one. Humans and other mammals are not so fortunate, but we can regenerate the tips of our digits, as long as enough of the nail remains. This was first shown some 40 years ago; today researchers finally reveal why it is that nails are necessary.

Working with mice, researchers led by Mayumi Ito at New York University have identified a population of stem cells lying beneath the base of the nail that can orchestrate the restoration of a partially amputated digit. However, the cells can do so only if sufficient nail epithelium — the tissue that lies immediately below the nail — remains. The results are published on Nature's website today1.

The process is limited compared with the regenerative powers of amphibians, but the two share many features, from the molecules that are involved to the fact that nerves are necessary. “I was amazed by the similarities,” says Ito. “It suggests that we partly retain the regeneration mechanisms that operate in amphibians.”

By labelling groups of nail cells so that all the daughter cells they produced were blue, Ito, together with Makoto Takeo and others, showed that the nail base contains a small population of self-renewing stem cells, which sustain the nail’s continuous growth. This ongoing growth depends on signals carried by the Wnt family of proteins — if this signalling pathway is disrupted, mouse nails cannot form.

The team found that the same pathway is involved in the regeneration of lost mouse toe tips. After amputation, the Wnt pathway is activated in the epithelium underlying the remaining nail and attracts nerves to the area. Through a protein called FGF2, the nerves drive the growth of mesenchymal cells, which restore tissues such as bone, tendons and muscle. Within five weeks, the digit is good as new.

However, none of this can happen if the digit is amputated too far back, and too much nail epithelium is lost. In such cases, the Wnt pathway is never activated, the nerves do not extend and the other tissues cannot regenerate.

“It’s a fantastic paper,” says James Monaghan, a regeneration biologist at Northeastern University in Boston, Massachusetts. “It’s really striking that the cellular mechanisms and signalling pathways, like Wnt and FGF, all seem to be the same as those in salamanders.”

It seems likely that these mechanisms will also apply to humans and other mammals, since the pathways are conserved, and previous studies have shown that humans also depend on nails to regenerate amputated digit tips.

“This is encouraging because the similarities give us hope that we will be able to induce human regeneration in the not-too-distant future,” says Ken Muneoka, a molecular biologist at Tulane University in New Orleans.

But Ashley Seifert, a regeneration biologist at the University of Kentucky in Lexington is not sure about the parallels. “Amphibians can regenerate a complete digit from any amputation level and they lack a nail organ altogether,” he says. He thinks it is possible that mammals “independently evolved the ability to regenerate digit tips through a mechanism dependent on the nail organ”.

Seifert also points out that if the entire nail is removed, activating the Wnt pathway in the remaining tissue does not stimulate any regeneration. “If the mechanism that they outlined was important, one would expect that the result of this experiment would be at least a partial stimulation of regeneration,” he says. Unless more details are discovered, the prospects for regenerating lost human limbs still look dim.