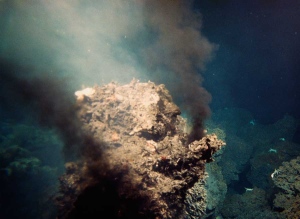 Conditions at ancient hydrothermal vents may have helped the first cells evolve by helping them regulate ions.

Rocks, water and hot alkaline fluid rich in hydrogen gas spewing out of deep-sea vents: this recipe for life has been championed for years by a small group of scientists.  Now two of them have fleshed out the detail on how the first cells might have evolved in these vents, and escaped their deep sea lair.

Nick Lane at University College London and Bill Martin at the University of Düsseldorf in Germany think the answer to how life emerged lies in the origin of cellular ion pumps, proteins that regulate the flow of ions across the cell's membrane, the barrier that separates it from the outside world. Their hypothesis is published today in Cell.

Life in the rocks

In all cells today, an enzyme called ATP synthase uses the energy from the flow of ions across membranes to produce the universal energy-storage molecule ATP. This essential process depends in turn on ion-pumping proteins that generate these gradients. But this creates a chicken-and-egg problem: cells store energy by means of proteins that make ion gradients, but it takes energy to make the proteins in the first place.

Lane and Martin argue1 that hydrogen-saturated alkaline water meeting acidic oceanic water at underwater vents would produce a natural proton gradient across thin mineral 'walls' in rocks that are rich in catalytic iron–sulphur minerals. This set-up could create the right conditions for converting carbon dioxide and hydrogen into organic carbon-containing molecules, which can then react with each other to form the building blocks of life such as nucleotides and amino acids.

The rocks of deep-sea thermal vents contain labyrinths of these tiny thin-walled pores, which could have acted as 'proto-cells', both producing a proton gradient and concentrating the simple organic molecules formed, thus enabling them eventually to generate complex proteins and the nucleic acid RNA. These proto-cells were the first life-forms, claim Lane and Martin.

It is assumed that the rocky proto-cells would initially be lined with leaky organic membranes. If the cells were to escape the vents and become free-living in the ocean, these membranes would have to be sealed. But sealing the membrane would cut off natural proton gradients, because although an ATP synthase would let protons into the cell, there would be nothing to pump them out, and the concentration of protons on each side of the membrane would rapidly equalize. Without an ion gradient “they would lose power,” says Lane.

Proteins that pump protons out of the cell would solve the problem, but there would have been no pressure for such proteins to evolve until after the membranes were closed. In which case, “They would have had to evolve a proton pumping  system in no time, which is impossible,” says Lane.

Lane and Martin think that proto-cells escaped this dilemma because they evolved a sodium-proton antiporter — a simple protein that uses the influx of protons to pump sodium ions out of the cell. As the proto-cell membranes started closing up, they became impermeable to the large sodium ions before the smaller protons. This would have provided advantages  to cells that evolved a sodium-pumping protein, while they could still rely on the vents’ natural proton gradients to generate energy. The antiporters created sodium gradients as well, and when the membrane closed up completely, the cells could run on the sodium gradient, and be free to leave the vent.

Lane and Martin drew inspiration for their hypothesis from bacteria and archaea that live in these extreme environments today. “Their biochemistry seems to emerge seamlessly from the conditions in vents,” says Lane. These microbes use iron–sulphur-containing proteins to convert hydrogen and carbon dioxide into organic molecules. They rely on sodium–proton antiporters to generate ion gradients, and their membrane proteins, such as the ATP synthase, are compatible with gradients of sodium ions or protons.

Wolfgang Nitschke, a biochemist at the French National Center for Scientific Research in Marseille, praises the duo for using knowledge of modern microbes to produce detailed scenarios for the origin of life. “In stark contrast to basically all other origin-of-life hypotheses, research in the framework of the alkaline-vent scenario is empirical,” he says. “It is an outstanding paper.”