Frazer’s methods of analysis wouldn't all pass muster among anthropologists today (his work was first published in 1890), but it is hard not to conclude from his descriptions that what industrialized societies today would regard as the most extreme psychopathy has in the past been seen as normal — and indeed sacred — behaviour.

In almost all societies, killing within a tribe or clan has been strongly taboo; exemption is granted only to those with great authority. Anthropologists have suspected that ritual human sacrifice serves to cement power structures — that is, it signifies who sits at the top of the social hierarchy. 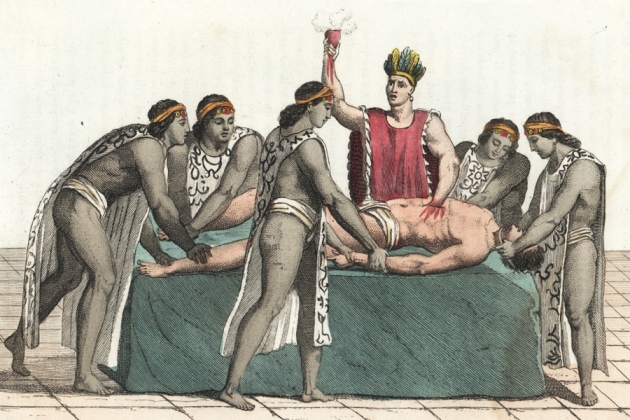 An Aztec priest removes a man's heart in a sacrificial ritual and offers it to the god Huitzilopochtli (from handcoloured engraving by Giulio Ferrario's Ancient and Modern Costumes of all the Peoples of the World, Florence, Italy, 1843).

The idea makes intuitive sense, but until now there has been no clear evidence to support it. In a study published in Nature2, Joseph Watts, a specialist in cultural evolution at the University of Auckland in New Zealand, and his colleagues have analysed 93 traditional cultures in Austronesia (the region that loosely embraces the many small and island states in the Pacific and Indonesia) as they were before they were influenced by colonization and major world religions (generally in the late 19th and early 20th centuries).

By delving into ethnographic records, the researchers tried to tease out the relationship between human sacrifice and social hierarchy. They find that the prevalence of sacrifice increased with the degree of social stratification: it occurred in 25% of cultures with little or no stratification, 37% of those with moderately stratified societies, and 67% of those that had a pronounced hierarchy.

And by mapping the evolutionary relationships between cultures, the team suggests that human sacrifice and social hierarchy co-evolved. Although societies can become more or less stratified over time, societies that practised sacrifice were less apt to revert to milder degrees of stratification.

In other words, human sacrifice seems to bolster stratification: it helped to stabilize hierarchy, and conceivably, therefore, had a common role in the development of highly stratified societies that generally persist even today.

Human sacrifice seems to have been largely the privilege of priests or others who claimed religious authority. Watts and colleagues say that their results therefore disclose a “dark side” to the social role of religion. (They have previously shown that belief in supernatural punishing agencies in Austronesian cultures encouraged moral observance, and thereby promoted the emergence of stratified and complex social structures3).

There’s a danger of overgeneralization from any study of this kind. Human sacrifice is no more likely than, for instance, music to have had a single role in early societies. In the third century bc, for example, Chinese administrator Li Bing eliminated the sacrifice of young maidens to a river god during the conquest of Sichuan by the First Emperor. Some have suggested that he called the bluff of a local racket in which families rid themselves of unwanted daughters while getting rich on the compensation they received. Whether or not that is true, it’s easy to imagine how rituals could be abused for prosaic gain.

And even in Austronesia, add Watts's team, sacrifice wasn't always conducted for purely religious reasons. It could have other motivations, including to punish taboo violations, demoralize underclasses, mark class boundaries and instil fear of social elites, all of which aim at building and maintaining social control. For this reason, says Michael Winkelman, an anthropologist now retired from Arizona State University in Tempe, “I suspect that Watts et al. are assessing some general notion of social legitimated killing.”

Such considerations complicate any interpretation of Watts’s results, but it also gives them considerably more contemporary resonance.

By today’s standards, human sacrifice scarcely seems to fall within the norms of good morality. But one doesn’t need to be a moral relativist to accept that the connections between human sacrifice, obedience to authority and stable governance persist. To perceive a link between ancient, “savage” human sacrifices and the death penalty in some modern societies isn't to exaggerate or indulge in melodrama, as Winkelman's remarks testify.

Certainly the suggestion could seem glib, and the parallels cannot be taken too far. Unlike today’s death penalties, traditional ritual sacrifice was generally for religious purposes and it tended to exhibit no bloodlust or contempt for the victims. Often they were seen as godlike, and before their sacrifice, they might be treated with reverence and affection, and perhaps fed well like the biblical fatted calf. The remains of the dead body — it’s not even clear whether the word “victim” is appropriate — were imbued with power. If the flesh was chopped up, it was to share out this potent relic among the tribe.

Yet a contemporary state’s arrogation of the right to slaughter through the death penalty — breaking an otherwise rigid prohibition — still serves as, among other things, a demonstration of authority and a ritual of appeasement, whether towards supposed religious strictures or public opinion.

To future anthropologists, whatever explanations or justifications states offer today for imposing capital punishment may seem less revealing than the broader view of how such sanctified killing reinforces the social order. We can expect time’s retrospective gaze to lay bare the real reasons why we, no less than the ancient Aztecs or Samoans, valorize murder.

The original version of this article incorrectly ascribed comments to Michael Winkelman that were made by Watts's team in their research paper.