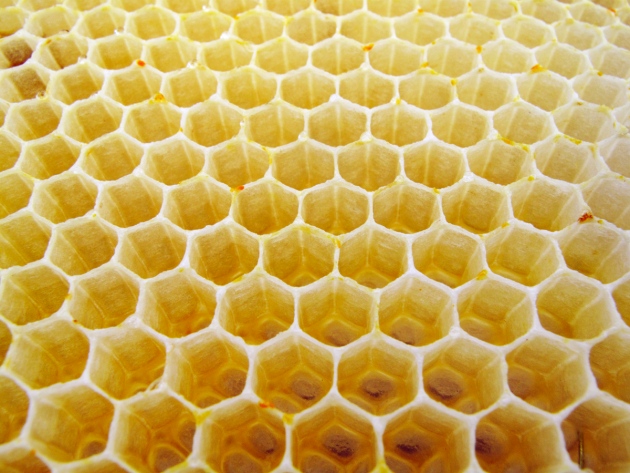 The regular hexagons of honeycombs might owe more to the laws of physics than to honeybees' engineering prowess.

The perfect hexagonal array of bees’ honeycombs, admired for millennia as an example of natural pattern formation, owes more to simple physical forces than to the skill of bees, according to a new study.

Engineer Bhushan Karihaloo at the University of Cardiff, UK, and his co-workers say that bees simply make cells that are circular in cross section and are packed together like a layer of bubbles. According to their research, which appears in the Journal of the Royal Society Interface1, the wax, softened by the heat of the bees’ bodies, then gets pulled into hexagonal cells by surface tension at the junctions where three walls meet.

This finding feeds into a long-standing debate about whether the honeycomb is an example of exquisite biological engineering or blind physics.

A regular geometric array of identical cells with simple polygonal cross sections can take only one of three forms: triangular, square or hexagonal. Of these, hexagons divide up the space using the smallest wall area, and thus, for a honeycomb, the least wax.

This economy was noted in the fourth century ad by the mathematician Pappus of Alexandria, who contended that the bees had “a certain geometrical forethought”. But in the seventeenth century, the Danish mathematician Erasmus Bartholin suggested that the insects need no such forethought. He said that hexagons would result automatically from the pressure of each bee trying to make its cell as large as possible, much as the pressure of bubbles packed in a single layer creates a hexagonal foam.

In 1917, the Scottish zoologist D’Arcy Thompson argued, again by analogy with bubbles, that surface tension in the soft wax will pull the cell walls into hexagonal, threefold junctions2. A team led by Christian Pirk, then at the University of Würzburg in Germany, showed in 2004 that molten wax poured into the space between a regular hexagonal array of cylindrical rubber bungs does indeed retract into hexagons as it cools and hardens3.

Karihaloo and his colleagues seem to have clinched this argument with their study. The team interrupted honeybees making a comb by smoking them out of the hive, and found that the most recently built cells have a circular shape, whereas those just a little older have developed into hexagons. The authors say that the worker bees that make the comb knead and heat the wax with their bodies until it reaches about 45 oC — warm enough to flow like a viscous liquid. 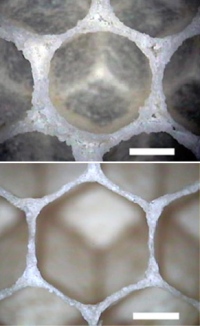 When first made, the comb cells of the Italian honeybee (Apis mellifera Ligustica) are circular (top), but after two days they already look more hexagonal (bottom).

The idea that the bees might first make circular cells, which become hexagonal subsequently, was proposed by Charles Darwin. But he was unable to find convincing evidence of it. Karihaloo explains that he and his colleagues got their idea from earlier experiments they conducted on a bundle of circular plastic straws, which developed hexagonal cross-sections when heated and squeezed4.

It might seem like there is not much left for the bees to do once they’ve made the circular cells. But they do seem to be expert builders. They can, for example, use their head as a plumb-line to measure the vertical, tilt the axis of the cells very slightly up from the horizontal to prevent the honey from flowing out, and measure cell wall thicknesses with extreme precision. Might they not, then, continue to play an active part in shaping the circular cells into hexagons, rather than letting surface tension do the job?

Physicist and bubble expert Denis Weaire of Trinity College Dublin suspects that they might, even though he acknowledges that “surface tension must play a role”.

Weaire adds that “if the bee’s internal temperature is enough to melt wax, the temperature of the hive will always be close to the melting point, so the wax will be close to being fluid. This may be more of a nuisance than an advantage.”

But Karihaloo explains that not all the bees act as 'heaters'. "The ambient temperature inside the comb is just 25o C", he says. Besides, he adds, the insects strengthen the walls over time by adding other materials to it, creating a kind of composite.