One reason that Eurasian civilizations dominated the globe is because they came from a continent that was broader in an east–west direction than north–south, claimed geographer Jared Diamond in his famous 1997 book Guns, Germs and Steel. Now, a modelling study has found evidence to support this 'continental axis theory'.

Continents that span narrower bands of latitude have less variation in climate, which means a set of plants and animals that are adapted to more similar conditions. That is an advantage, says Diamond, because it means that agricultural innovations are able to diffuse more easily, with culture and ideas following suit. As a result, Diamond's hypothesis predicts, along lines of latitude there will be more cultural homogeneity than along lines of longitude. 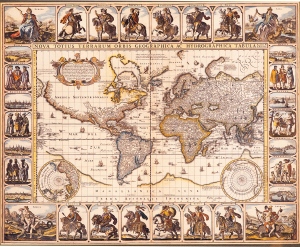 A country's shape could dictate its cultural diversity.

To test that prediction, researchers at Stanford University in California used language persistence as a proxy for cultural diversity, and analysed the percentage of historically indigenous languages that remain in use in 147 countries today relative to their shape. For example, the team looked at the difference between Chile, which has a long north–south axis, and Turkey, which has a wider axis running east to west.

The researchers found that if a country had a greater east–west axis than a north–south one, the less likely it was for its indigenous languages to persist. The relationship isn't straightforward, but the model suggests that Mongolia, which is about twice as wide as it is tall, would have 5% fewer indigenous languages than Angola, which is roughly square. Meanwhile, Peru — about twice as tall as it is wide — would be predicted to have 5% more persistent languages than Angola. The result, say the authors, supports Diamond's theory because it indicates that east–west countries have more homogeneous cultures.

“It is a significant relationship that is an observable implication of the Diamond thesis,” says political scientist David Laitin, who led the work. The results are published online today in the Proceedings of the National Academy of Sciences1. Greater cultural diversity is also known to be associated with outcomes such as lower levels of economic growth and higher probabilities of violence, he adds.

Although previous research has shown that historical empires were more likely to have expanded farther in the east–west direction than north–south2, tests of Diamond's idea have been limited because of the small number of continents. Raising the sample size by using countries allows a better claim to statistical significance. Using language persistence as a proxy for cultural diversity is controversial, admits Laitin, but he argues that it is the best quantifiable way.

The work by Laitin and his colleagues includes controls for factors such as the distance of a country from the Equator (historically, more languages have existed closer to the Equator); how many mountains a country contains (because they can hinder the spread of language); and the country's age (newer countries could have more languages because there has been less time for homogenization).

Laitin also dismisses the possibility that the observed effect could have resulted from east–west countries being more interested in state building — more likely, for example, to introduce policies to bring about a single national language. When Laitin and his team repeated the analysis in 538 artificially created countries (which they derived by combining each real country with its neighbours), the results showed that the relationship still held up.

Thomas Currie, an expert in human evolutionary ecology at University College London, says that the study is a novel way of testing Diamond's hypothesis, and adds that it does a “thorough job” of controlling for a number of alternative explanations. “The main result seems to be robust. [The study] further supports the idea that human history and cultural evolution are governed by general ecological and biogeographical rules,” he says.

But others who are sceptical of the continental axis theory say that the study does little or nothing to strengthen its case. Language is a poor proxy for something as all-encompassing as culture, says John McNeill, a historian at Georgetown University in Washington DC. Many countries are either so small that the axis-length component of cultural diversity is negligible, or they are so close to square or round that it is hard to imagine a little extra length in one direction or another making much difference. “Unfortunately there aren't many countries shaped like Chile,” he says.