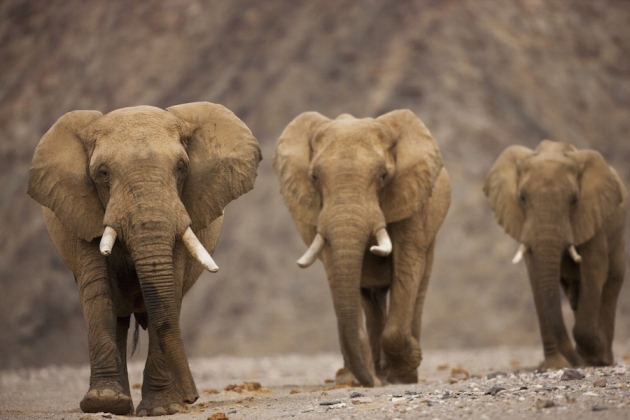 Elephants have evolved extra copies of a gene that fights tumour cells, according to two independent studies1, 2 — offering an explanation for why the animals so rarely develop cancer.

Why elephants do not get cancer is a famous conundrum that was posed — in a different form — by epidemiologist Richard Peto of the University of Oxford, UK, in the 1970s3. Peto noted that, in general, there is little relationship between cancer rates and the body size or age of animals. That is surprising: the cells of large-bodied or older animals should have divided many more times than those of smaller or younger ones, so should possess more random mutations predisposing them to cancer. Peto speculated that there might be an intrinsic biological mechanism that protects cells from cancer as they age and expand.

At least one solution to Peto's paradox may now have been found, according to a pair of papers independently published this week. Elephants have 20 copies of a gene called p53 (or, more properly, TP53), in their genome, where humans and other mammals have only one. The gene is known as a tumour suppressor, and it snaps to action when cells suffer DNA damage, churning out copies of its associated p53 protein and either repairing the damage or killing off the cell.

Uncovering TP53's role has taken a few years. Joshua Schiffman, a paediatric oncologist and scientist at the University of Utah in Salt Lake City, first heard about Peto’s paradox three years ago at an evolution conference, when Carlo Maley, an evolutionary biologist now at Arizona State University in Tempe, revealed he had found multiple copies of TP53 in the African elephant's genome.

Schiffman specializes in treating children missing one of their TP53 gene's two alleles, which leads them to develop cancer. So after hearing Maley's talk, he wondered whether elephants held some biological insight that could help his patients. He teamed up with Maley, who had not yet published his work, and asked elephant keepers at Salt Lake City’s zoo whether they could spare some elephant blood so that he could test how the p53 protein works in the mammals' white blood cells.

At about the same time, in mid-2012, Vincent Lynch, an evolutionary geneticist at the University of Chicago in Illinois, was preparing for a lecture on Peto’s paradox, and wondered about mechanisms that could explain it. “Right before I gave the lecture, I searched the elephant genome for p53, and 20 hits came up,” says Lynch.

Schiffman and Lynch’s teams have now independently revealed their findings — Schiffman's in the Journal of the American Medical Association1, and Lynch's in a paper2 posted to the bioRxiv.org preprint site, but which is in review at the journal eLife.

Using zoo autopsy records for 36 mammals — from striped grass mice to elephants — Schiffman’s team recorded no relationship between body size and cancer rate. (Around 3% of elephants get cancer, according to the team’s analysis of hundreds of captive-elephant deaths).

The researchers found that elephants produce extra copies of the p53 protein, and that elephant blood cells seem exquisitely sensitive to DNA damage from ionizing radiation. The animals' cells carry out a controlled self-destruction called apoptosis in response to DNA damage at much higher rates than do human cells. Schiffman suggests that, instead of repairing the DNA damage, compromised elephant cells have evolved to kill themselves to nip nascent tumours in the bud. “This is a brilliant solution to Peto’s paradox,” he says.

Lynch’s team — working with African and Asian elephant skin cells from the San Diego Zoo in California — found similar results. They also discovered more than a dozen TP53 copies in two extinct species of mammoth, but just one copy in elephants’ close living relatives, manatees and hyraxes (a small, furry mammal). Lynch thinks that the extra copies evolved as the lineage that led to elephants expanded in size. But he thinks that other biological mechanisms are involved too.

Mel Greaves, a cancer biologist at the Institute for Cancer Research in London, agrees that TP53 cannot be the only explanation. “As large animals get bigger, they become more and more sluggish,” he notes, thereby slowing their metabolism and the pace at which their cells divide. And protective mechanisms can only do so much to stop cancer, he adds. “What would happen if elephants smoked and had a bad diet,” he says. “Would they really be protected from cancer? I doubt it.”