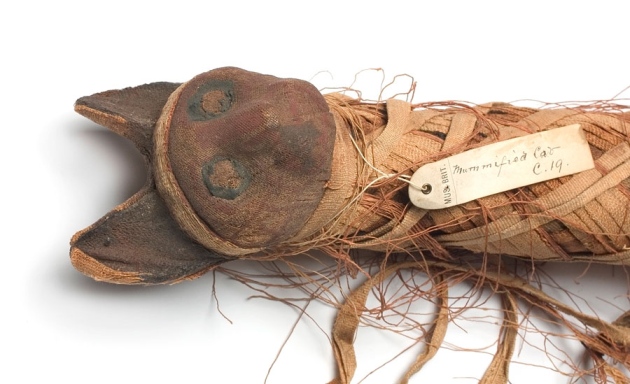 A mummified cat from ancient Egypt.

Thousands of years before cats came to dominate Internet culture, they swept through ancient Eurasia and Africa carried by early farmers, ancient mariners and even Vikings, finds the first large-scale look at ancient-cat DNA.

The study, presented at a conference on 15 September, sequenced DNA from more than 200 cats that lived between about 15,000 years ago and the eighteenth century ad.

Researchers know little about cat domestication, and there is active debate over whether the house cat (Felis silvestris) is truly a domestic animal — that is, its behaviour and anatomy are clearly distinct from those of wild relatives. “We don’t know the history of ancient cats. We do not know their origin, we don't know how their dispersal occurred,” says Eva-Maria Geigl, an evolutionary geneticist at the Institut Jacques Monod in Paris. She presented the study at the 7th International Symposium on Biomolecular Archaeology in Oxford, UK, along with colleagues Claudio Ottoni and Thierry Grange.

A 9,500-year-old human burial from Cyprus also contained the remains of a cat1. This suggests that the affiliation between people and felines dates at least as far back as the dawn of agriculture, which occurred in the nearby Fertile Crescent beginning around 12,000 years ago. Ancient Egyptians may have tamed wild cats some 6,000 years ago2, and under later Egyptian dynasties, cats were mummified by the million. One of the few previous studies3 of ancient-cat genetics involved mitochondrial DNA (which, contrary to most nuclear DNA, is inherited through the maternal line only) for just three mummified Egyptian cats.

Geigl’s team built on those insights, but expanded the approach to a much larger scale. The researchers analysed mitochondrial DNA from the remains of 209 cats from more than 30  archaeological sites across Europe, the Middle East and Africa. The samples dated from the Mesolithic — the period just before the advent of agriculture, when humans lived as hunter–gatherers — up to the eighteenth century.

Cat populations seem to have grown in two waves, the authors found. Middle Eastern wild cats with a particular mitochondrial lineage expanded with early farming communities to the eastern Mediterranean. Geigl suggests that grain stockpiles associated with these early farming communities attracted rodents, which in turn drew wild cats. After seeing the benefit of having cats around, humans might have begun to tame these cats.

Thousands of years later, cats descended from those in Egypt spread rapidly around Eurasia and Africa. A mitochondrial lineage common in Egyptian cat mummies from the end of the fourth century bc to the fourth century ad was also carried by cats in Bulgaria, Turkey and sub-Saharan Africa from around the same time. Sea-faring people probably kept cats to keep rodents in check, says Geigl, whose team also found cat remains with this maternal DNA lineage at a Viking site dating to between the eighth and eleventh century ad in northern Germany.

“There are so many interesting observations” in the study, says Pontus Skoglund, a population geneticist at Harvard Medical School in Boston, Massachusetts. “I didn’t even know there were Viking cats.” He was also impressed by the fact that Geigl’s team was able to discern real population shifts from mitochondrial DNA, which traces only a single maternal lineage. Nonetheless, Skoglund thinks that nuclear DNA — which provides information about more  of an individual's ancestors — could address lingering questions about cat domestication and spread, such as their relationship to wild cats, with which they still interbreed.

Geigl’s team also analysed nuclear DNA sequences known to give tabby cats blotched coats, and found that the mutation responsible did not appear until the Medieval period. She hopes to sequence more nuclear DNA from ancient cats. But funding for modern cat genomics is scarce, which is one reason why it lags far behind such research on dogs. By contrast, a team charting dog domestication announced at the Oxford meeting that it is preparing to sequence nuclear DNA from more than 1,000 ancient dogs and wolves.

Geigl disputed this reporter’s insinuation that dogs seem to be more popular among researchers than cats. “We can do it, too,” she says. “We just need money.”