Rising levels of carbon dioxide really did bring about the end of the most recent ice age, say researchers. By compiling a global climate record, a team has shown that regions in which concentrations of greenhouse gases increased after the warming were exceptions to the big picture.

There are many ideas about what caused the end of the last ice age 10,000 years ago, but a lack of data has hindered testing of hypotheses. It has been known that changes in temperature and CO2 levels were closely correlated during this time, but no one has been able to prove that CO2 caused the warming. 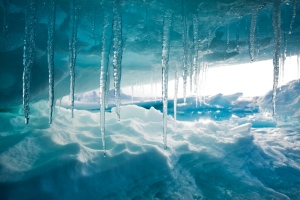 A lack of data has hindered the testing ideas about the end of the last ice age.

Ice samples from Antarctica even suggested that temperatures rose a few centuries before CO2 levels, making it impossible for the gas to have been responsible. This provided ammunition for climate sceptics.

But, by analysing data gathered from 80 locations around the world, Jeremy Shakun, a palaeoclimatologist at Harvard University in Cambridge, Massachusetts, and his colleagues have shown that at the global level, warming followed CO2 increases. The team used seven different records of past temperature, including ice cores, ancient pollen and the chemical composition of fossilized microscopic life.

“This is the first effort to get most of the data that’s out there together,” says Shakun. “It's the first hard empirical proof that CO2 was a big driver of global warming out of the ice age.” The finding is published in Nature today1.

Atmospheric CO2 levels increased by around 100 parts per million over the course of several thousand years at the end of the last ice age. Concentrations rose by the same amount in the twentieth century, and are projected to increase by even more in the twenty-first.

The global record shows that the end of the ice age was probably triggered by changes in Earth’s orbit and subsequent shifts in the ocean currents that move heat around the world. But rising CO2 levels amplified this initially regional warming.

It's not clear what caused the rise in carbon dioxide. One idea is that it leached out of the deep ocean when melting ice and shifting winds brought water rich in the gas up to the surface.

In Antarctica, the temperature rose more quickly than elsewhere owing to a slowing of the ocean currents that usually carry heat away from the south to the north. This accounts for the lag between the carbon dioxide and temperature records on that continent.

“This article confirms once more the role of CO2 in climate change," says Jean-Pascal van Ypersele, a climatologist at the French-speaking Catholic University of Louvain in Belgium. "It very nicely solves one of the apparent discrepancies between the Antarctic temperature record and the evolution of CO2 concentration.”

Shakun's team backed up its interpretation of the real-world data with climate-modelling simulations. They examined several drivers of past warming, including dust, loss of ice sheets — which causes warming because ice reflects sunlight, so when it retreats, more sunlight reaches Earth — other greenhouse gases such as methane and nitrous oxide, and changes in vegetation coverage. The team found that CO2 levels were more important than any of these factors in driving warming.