This video was produced through a collaboration between NOVA and Scientific American. To learn more about slime molds and other amazing creatures, watch 'What Are Animals Thinking?' on NOVA scienceNOW, airing November 7, 2012 at 10 pm on PBS.

Gardeners sometimes encounter them in their backyards—spongy yellow masses squatting in the dirt or slowly swallowing wood chips. Hikers often spot them clinging to the sides of rotting logs like spilled bowls of extra cheesy macaroni. In Mexico some people reportedly scrape their tender bodies from trees and rocks and scramble them like eggs. They are slime molds: gelatinous amoebae that have little to do with the kinds of fungal mold that ruin sourdough and pumpernickel. Biologists currently classify slime molds as protists, a taxonomic group reserved for "everything we don't really understand," says Chris Reid of the University of Sydney.

Something scientists have come to understand is that slime molds are much smarter than they look. One species in particular, the SpongeBob SquarePants–yellow Physarum polycephalum, can solve mazes, mimic the layout of man-made transportation networks and choose the healthiest food from a diverse menu—and all this without a brain or nervous system. "Slime molds are redefining what you need to have to qualify as intelligent," Reid says.

In the wild, P. polycephalum rummages through leaf litter and oozes along logs searching for the bacteria, fungal spores and other microbes that it envelops and digests à la the amorphous alien in the 1958 horror film The Blob. Although P. polycephalum often acts like a colony of cooperative individuals foraging together, it in fact spends most of its life as a single cell containing millions of nuclei, small sacs of DNA, enzymes and proteins. This one cell is a master shape-shifter. P. polycephalum takes on different appearances depending on where and how it is growing: In the forest it might fatten itself into giant yellow globs or remain as unassuming as a smear of mustard on the underside of a leaf; in the lab, confined to a petri dish, it usually spreads itself thin across the agar, branching like coral. Biologists first brought the slime mold into the lab more than three decades ago to study the way it moves—which has a lot in common with they way muscles work on the molecular level—and to examine the way it reattaches itself when split. "In the earliest research, no one thought it could make choices or behave in seemingly intelligent ways," Reid explains. That thinking has completely changed.

In the early 2000s Toshiyuki Nakagaki, then at Hokkaido University in Japan, and his colleagues chopped up a single polycephalum and scattered the pieces throughout a plastic maze. The smidgens of slime mold began to grow and find one another, burgeoning to fill the entire labyrinth. Nakagaki and his teammates placed blocks of agar packed with nutrients at the start and end of the maze. Four hours later the slime mold had retracted its branches from dead-end corridors, growing exclusively along the shortest path possible between the two pieces of food. 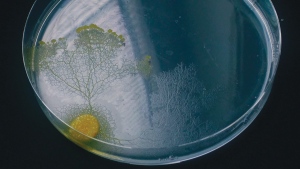 This past October Reid and his colleagues published a study revealing that the way a slime mold navigates its environment is even more sophisticated than previously realized. As polycephalum moves through a maze or crawls along the forest floor, it leaves behind a trail of translucent slime. Reid and his teammates noticed that a foraging slime mold avoids sticky areas where it has already traveled. This extracellular slime, Reid reasoned, is a kind of externalized spatial memory that reminds polycephalum to explore somewhere new.

To test this idea, Reid and his colleagues placed slime molds in a petri dish behind a U-shaped barrier that blocked a direct route to a piece of food. Because the barrier was made of dry acetate, the slime molds could not stick to it and climb over it; instead, they had to follow the contours of the U toward the food. Ultimately, 23 of 24 slime molds reached the goal. But when Reid coated the rest of the petri dish in extracellular slime before introducing the slime molds, only eight of 24 found the food. All that preexisting slime confused the slime molds, preventing them from marking different areas as explored or unexplored. Reid thinks that a polycephalum in a labyrinth is similarly dependent on its slime, using it to first map the entire maze and then to remember which corridors are dead-ends.

Navigating a maze is a pretty impressive feat for a slime mold, but the protist is in fact capable of solving more complex spatial problems: Inside laboratories slime molds have effectively re-created Tokyo's railway network in miniature as well as the highways of Canada, the U.K. and Spain. When researchers placed oat flakes or other bits of food in the same positions as big cities and urban areas, slime molds first engulfed the entirety of the edible maps. Within a matter of days, however, the protists thinned themselves away, leaving behind interconnected branches of slime that linked the pieces of food in almost exactly the same way that man-made roads and rail lines connect major hubs in Tokyo, Europe and Canada.

In other words, the single-celled brainless amoebae did not grow living branches between pieces of food in a random manner; rather, they behaved like a team of human engineers, growing the most efficient networks possible. Just as engineers design railways to get people from one city to another as quickly as possible, given the terrain—only laying down the building materials that are needed—the slime molds hit upon the most economical routes from one morsel to another, conserving energy. Andrew Adamatzky of the University of the West of England Bristol and other researchers were so impressed with the protists' behaviors that they have proposed using slime molds to help plan future roadway construction, either with a living protist or a computer program that adopts its decision-making process. Researchers have also simulated real-world geographic constraints like volcanoes and bodies of water by confronting the slime mold with deterrents that it must circumvent, such as bits of salt or beams of light.

Another set of experiments suggests that slime molds navigate time as well as space, using a rudimentary internal clock to anticipate and prepare for future changes in their environments. Tetsu Saigusa of Hokkaido University and his colleagues—including Nakagaki—placed a polycephalum in a kind of groove in an agar plate stored in a warm and moist environment (slime molds thrive in high humidity). The slime mold crawled along the groove. Every 30 minutes, however, the scientists suddenly dropped the temperature and decreased the humidity, subjecting the polycephalum to unfavorably dry conditions. The slime mold instinctively began to crawl more slowly, saving its energy. After a few trials, Saigusa and his colleagues stopped changing the slime mold's environment, but every 30 minutes the amoeba's pace slowed anyway. Eventually it stopped slowing down spontaneously. Slime molds did the same thing at intervals of 60 and 90 minutes, although, on average, only about half of the slime molds tested showed spontaneous slowing in the absence of an environmental change.Because the slime mold cannot rely on its slime for this trick, Saigusa speculates that it instead depends on an internal mechanism of some kind, perhaps involving the perpetually pulsating gelatinous contents of its one cell, known as cytoplasm. The slime mold's membrane rhythmically constricts and relaxes, keeping the cytoplasm within flowing. When the amoeba's membrane encounters food, it pulsates more quickly and expands, allowing more cytoplasm to flow into that region; when it stumbles onto something aversive—such as bright light—its palpitations slow down and cytoplasm moves elsewhere. Somehow, the slime mold may be keeping track of its own rhythmic pulsing, creating a kind of simple clock that would allow it to anticipate future events.

P. polycephalum is not only a great navigator and good forward thinker, so to speak—it is also a healthy eater. Slime molds survive best on a diet comprising two thirds protein and one third carbohydrates. Audrey Dussutour of the University of Paul Sabatier in France placed slime molds in the center of a clock face of 11 different pieces of food, each with a unique ratio of proteins and carbohydrates. When presented with this circular menu, slime molds consistently glommed onto the piece of food with optimal balance of nutrients.

Compared with most organisms, slime molds have been on the planet for a very long time—they first evolved at least 600 million years ago and perhaps as long as one billion years ago. At the time, no organisms had yet evolved brains or even simple nervous systems. Yet slime molds do not blindly ooze from one place to another—they carefully explore their environments, seeking the most efficient routes between resources. They do not accept whatever circumstances they find themselves in, but rather choose conditions most amenable to their survival. They remember, anticipate and decide. By doing so much with so little, slime molds represent a successful and admirable alternative to convoluted brain-based intelligence. You might say that they break the mold.