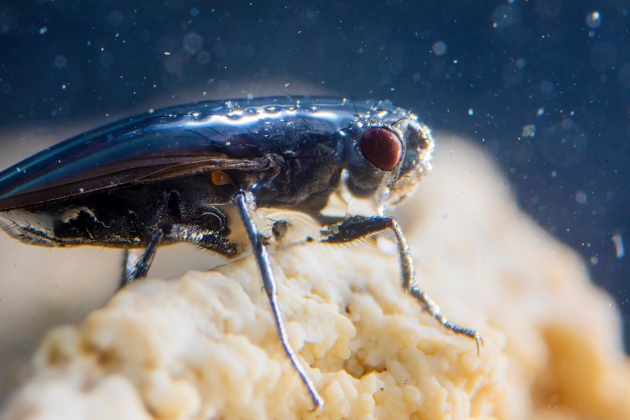 More than 150 years ago, American writer Mark Twain described how flies enter Mono Lake in California then “pop up to the surface as dry as a patent office report”. Now scientists have identified how they do so.

The alkali fly Ephydra hians can crawl down the side of the lake to depths of 8 metres and remain submerged for 15 minutes before emerging unscathed. Not only can it achieve this unusual feat, it does so in a lake whose waters are so alkaline and so salty that they support only algae, bacteria and brine shrimps.

Now two biologists at the California Institute of Technology in Pasadena have worked out how the fly creates the bubble of air that surrounds it during the dive. Floris van Breugel and Michael Dickinson filmed flies entering a solution that mimics the sodium-carbonate-rich conditions of the lake. The flies are covered in hairs that are coated in a waxy substance that repels water. As they enter the water, an air bubble forms around their entire bodies, apart from their eyes. Not only is this bubble protective, it also provides the flies with breathable oxygen.

The scientists found that the flies had a denser coat of hairs than other species that were unable to stay dry underwater. They also found that the waxy substance that coats these hairs contained smaller hydrocarbons than those of other species. They think that these two traits combine to help prevent E. hians from getting wet, in particular as it emerges to the surface through the negatively electrically charged air-water interface created by the conditions in the lake. The researchers report their findings in the Proceedings of the National Academy of Sciences1.

There are other shore flies of the same family (Ephydridae) that crawl underwater to lay eggs, but not in such hostile conditions, says van Breugel. He hopes to compare alkali flies from different lakes around the world.

During the annual autumn migration, there can be as many as 2 million birds at Mono Lake at any given time, says van Breugel, and the flies are an important source of food. “This story is a beautiful example of how tiny interactions can have global ecological effects, because Mono Lake is such an important habitat for migratory birds,” he says.

“Van Breugel and Dickinson's paper not only provides an insightful and detailed explanation of underlying mechanisms for this behaviour, it is also an elegant bit of insect natural history,” says Stephen Marshall, an entomologist at the University of Guelph in Canada.