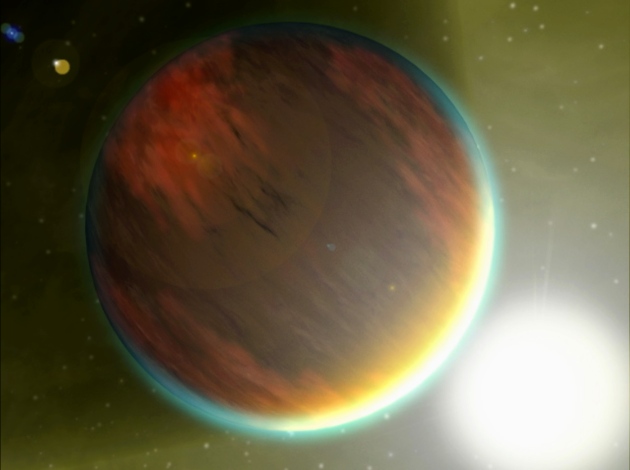 Scientists searching for worlds outside of the Solar System say that three such planets — distant gas giants that resemble Jupiter — are surprisingly dry.

The atmospheres of these exoplanets, known as ‘hot Jupiters’, contain between one-tenth and one-thousandth water vapour than predicted, measurements from the Hubble Space Telescope show. The findings, published 24 July in Astrophysical Journal Letters1, are at odds with theories of how planets form.

The study re-analyses observations of the exoplanets HD 189733b, HD 209458b and WASP-12b, which are 20–270 parsecs (60–870 light years) away from Earth. As each exoplanet crossed in front of its host star, Hubble observed the spectrum of infrared light filtering through the planet’s atmosphere. A team led by Nikku Madhusudhan, an astronomer at the University of Cambridge, UK, then used atmospheric models to determine the combination of elements that produced each planet’s spectrum.

Under current theory, planets should accumulate molecules such as water faster than their host stars, write the authors. Hot Jupiters typically form in water-rich areas of solar systems and migrate toward their host stars. But Madhusudhan says the new findings suggest that these theories may have to be revised.

However, some scientists favour another possible explanation. Clouds at high altitudes above the exoplanets could be obscuring Hubble’s view of the water vapour buried deeper in the atmosphere. If this is true, “their results are completely undermined,” says Adam Burrows, an astronomer at Princeton University in New Jersey, who was part of the team whose data on HD 209458b were analysed in the current study2. He was not involved with the latest study.

Madhusudhan thinks that it is possible, but not likely, that clouds are skewing his results. The particles would have to be high in the atmosphere, above the water vapour, for this to be true. That would place the clouds in the thinnest part of each exoplanet's atmosphere, but they could be too heavy to stay aloft. The clouds would also need to survive in the wide range of temperatures the three planets' atmospheres span — 900–2,200 ºC — which models can't yet explain. “There is just no candidate cloud composition or physics that can do it,” he says.

But the fact that is is unclear how such clouds could be made doesn’t mean they don’t exist, says Zachory Berta-Thompson, an astronomer at the Massachusetts Institute of Technology in Cambridge. He and his colleagues have studied a hot rocky planet named GJ 1214b and determined that clouds were present high in its atmosphere, in a layer even thinner than those that Madhusudhan are considering3. “It’s a little bit frustrating that these planets are slightly more complicated than we’d like them to be,” Berta-Thompson says.

Researchers hope that telescopes now in development, including NASA’s James Webb Space Telescope and some large ground-based facilities under construction, will provide higher-resolution data that can dispel some of the current confusion.