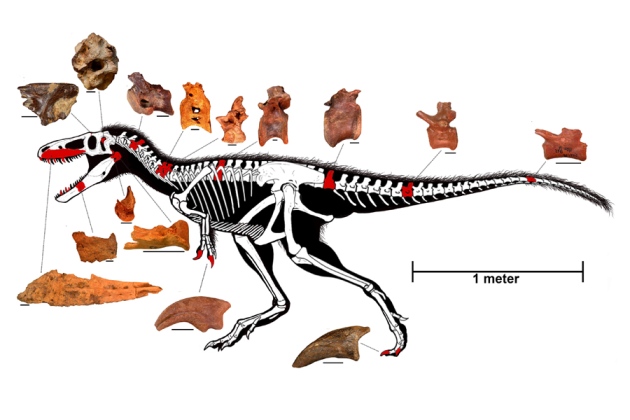 Proceedings of the National Academy of Sciences

The reconstructed skeleton of the horse-sized dinosaur Timurlengia euotica. Discovered fossilized bones are highlighted in red.

Fragments of a newly identified dinosaur fossil from Uzbekistan have shed more light on how Tyrannosaurus rex and other fearsome carnivores evolved from their diminutive forebears — by getting smart before they got big.

The tyrannosaurs of the late Cretaceous period (80 million to 66 million years ago) are among the biggest carnivores to have walked the Earth. But their predecessors — who lived as far back as 170 million years ago, in the Jurassic period — were much smaller; they were generally no bigger than a horse. They also had proportionally smaller heads and longer arms, and lacked the sense of smell and ability to hear low-frequency sound of later tyrannosaurs.

A 20-million-year gap in the fossil record, from 100 million years ago to the time of the giant tyrannosaurs' appearance, has made it difficult to trace how the keen-sensed giant carnivores evolved. But fossil fragments found in the Kyzylkum desert belong to a newly described horse-sized dinosaur that lived 92 million to 90 million years ago, slotting neatly into this gap, palaeontologists report1. “This is what we’d been waiting for,” says Stephen Brusatte, a palaeontologist at the University of Edinburgh, UK, who led the team that announced the find in the Proceedings of the National Academy of Sciences on 14 March.

The dinosaur has been christened Timurlengia euotica, meaning ‘well-eared Timurleng’ — in reference to the fourteenth-century central Asian ruler Timurleng, or Tamerlane, and to the specimen’s large inner ear. It “captures tyrannosaurs at a key point in their evolutionary transformation”, says Lawrence Witmer, who studies the soft tissues of dinosaur heads at Ohio University in Athens.

Although around 25 fragments of Timurlengia were found between 1997 and 2006, Brusatte was shown only the most significant of them — the braincase — in 2014, because of how long it took to process the huge number of finds excavated from the same area. The braincase, which is kept at the Russian Academy of Sciences in Saint Petersburg, suggests that despite the dinosaur’s small size, weighing around 170–270 kilograms, Timurlengia already housed a relatively long, tubular brain, similar to that of T. rex. The size and thickness of its head, compared with the rest of its body, also resembles that of later tyrannosaurs. 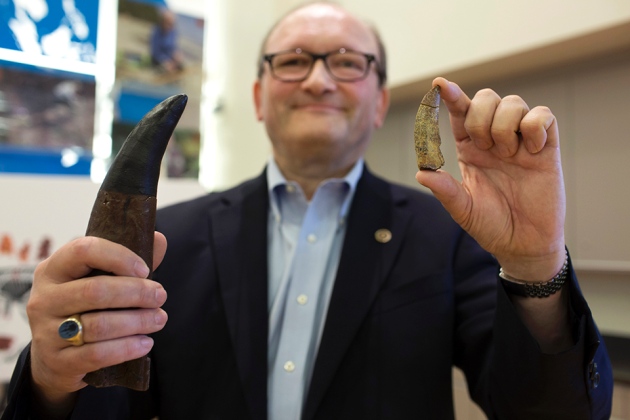 Hans Seus, chair of the Simthsonian Institution's palaeobiology department, compares a tooth of the new tyrannosaur Timurlengia euotica (right) to a cast of a much larger tooth from Tyrannosaurus rex (left).

Timurlengia’s long cochlear duct — the part of the inner ear that controls hearing — also resembles that of its successors, which suggests that it would have shared their ability to hear low-frequency sounds, enabling it to hear prey from great distances. It is not known, however, whether the dinosaur possessed later tyrannosaurs’ keen sense of smell.

The find suggests that the tyrannosaur “honed its sensory toolbox before it gained massive size”, says Christopher Brochu, who studies the evolutionary history of dinosaurs at the University of Iowa in Iowa City. That might have enabled tyrannosaurs to reach the top of the predatory food chain when earlier large allosaurs — a separate group of dinosaurs to the tyrannosaurs — went extinct.

Timurlengia “is a wonderful affirmation of evolution”, says Witmer, “in that it’s an evolutionary intermediate that slots right in place in terms of both time and its anatomy”. 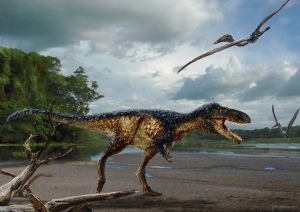 Still, the new find is only a single data point in a 20-million-year evolutionary period; Timurlengia might not be typical of other tyrannosaurs that were alive at the time.

And tyrannosaurs come in a huge variety of shapes and sizes. Even as far back as 100 million years ago, there were large tyrannosaurs — “weird off-shoots”, says Brusatte, that were not ancestors of the enormous tyrannosaurs of the late Cretaceous — such as the long-snouted Xiongguanlong baimoensis, and the 9-metre long Yutyrannus huali.

“Some elements of this story could be proven wrong by future discoveries,” says Brusatte.  “I hope they are, because that means we’ll have more and better middle Cretaceous fossils”.