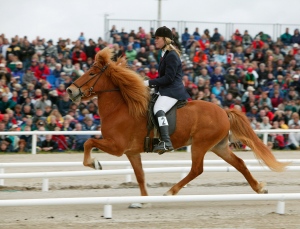 Some horses can perform unusual gaits thanks to a single mutation.

A single gene mutation in horses can endow them with a wider repertoire of gaits. The finding, reported this week in Nature1, shows that some seemingly complex physical traits can have a simple genetic basis. It could also shed light on the genes behind movement disorders in humans.

Horses usually have three styles of gait — walk, trot and gallop. But certain breeds can perform extra gaits, such as pacing, in which the legs on one side of the body move together. Breeds such as the American Standardbred and some Icelandic horses can pace, which is useful in certain types of racing.

Researchers led by Leif Andersson, a geneticist at Uppsala University in Sweden studied the genomes of 70 horses that could perform extra gaits — 40 could pace, and 30 could perform other alternate gaits. The analysis revealed a single mutation common to all the horses that could pace, in a gene called DMRT3. Both copies of that gene in the pacing horses were mutated.

Having such detailed information about horse gaits was key to the gene hunt — horse breeders and researchers wouldn't have spotted this if they had categorised gaits more loosely. “What they’ve done so nicely is really thought carefully about how to classify phenotype,” says Elaine Ostrander, who studies the genetics of domesticated animals at the US National Human Genome Research Institute in Bethesda, Maryland. This fine-grained information about gait styles makes the genetic link clear, she says. “They got a screamingly hot result.”

“It sounds like quite a complicated trait, the control of gait,” says Andersson. But in this case, the result was simple. “We thought it was too good to be true at first. But we were able to confirm it.”

Hear how a single mutation bestows extra gaits on some horses, as Leif Andersson talks to Kerri Smith.

To verify the gene’s link to locomotion, the researchers studied its function in mice, and found that mice with no functional copy of the gene had trouble coordinating their limbs. Further, the gene was found to be expressed in cells in the mouse spinal cord that connected to motor neurons.

Horses without this mutation cannot move their right hindleg and right foreleg forward at the same time, Andersson says. But with the mutation, which shortens the encoded protein by about one-third, “the regulation of the movement isn’t so strict anymore, and becomes more flexible,” he says.

The work could provide a basis for studies of human disorders, says Ostrander. Her own work on the genetics of skull formation in dogs is providing hints of the genes implicated in human disorders that feature similar phenotypes. Genes linked to specific physical characteristics or behaviours can provide clues to the genetic basis of human syndromes. The relationship between a mutation and the resulting phenotype may not be as simple in humans as in gaited horses, but walking difficulty is a common symptom of many neuromuscular disorders. “This gene will slide into the puzzle of one of those human syndromes, for sure,” Ostrander says.

The image caption originally indicated that the horse pictured was pacing. It is in fact using another unique gait, known as the Tölt.