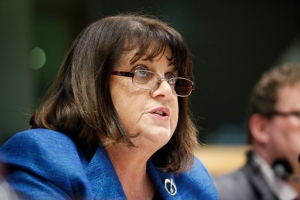 A last-minute deal on the Horizon 2020 programme, the pan-European scheme to boost research and innovation, has finally been reached by the Irish presidency of the European Union (EU) and members of the European Parliament.

The agreement was brokered in Brussels yesterday — just days before Ireland's presidency ends on 30 June. It follows a series of failed negotiations that began in February, when the 27 EU member states agreed on a budget of around €70 billion (US$91 billion) for the programme, which will run from 2014 to 2020. That is some 13% less than the European Commission had proposed and 30% less than parliament had wanted. Details of Horizon 2020, including its funding model, were hotly debated following this in a series of 'trialogues' — internal talks involving national ministers, members of the European Parliament (MEPs) and the commission.

“Together we have worked hard to reach this point,” says EU research commissioner Máire Geoghegan-Quinn. “We now have within reach what the European Parliament, member states and the European Commission all envisaged from the start: a research and innovation programme that will make a real difference for jobs and growth in Europe.”

The newly thrashed-out deal still requires approval by the parliament and member states, and retains a simplified funding model that is favoured by most member states and the commission. It foresees that all institutes participating in Horizon 2020 will be paid the full direct research costs plus a 25% flat rate to cover indirect expenses, including the use of large research facilities such as synchrotrons.

However, MEPs argued that the one-size-fits-all approach may disadvantage institutes that depend on such facilities, possibly making participation in EU-funded research projects unaffordable to some. Several research organizations, including the European University Association in Brussels and the Fraunhofer Society in Munich, Germany, lobbied for an exemption to this flat-rate model — giving the full costs instead to organizations with extremely high overheads, which sometimes even exceed their direct costs.

But paying out full costs in the past has been a major bugbear for the commission and for member states who were concerned about the increasing amount of red tape in EU-funded research. The commission has promised that it will address the concerns of organizations that are anxious about the flat-rate model.

Scientists in the EU-12 — the 12 states that have joined the EU since 2004 — are particularly pleased about the simplified funding rules.

“The simple and attractive flat-rate system is apparently satisfying for partners in Poland and other new member states,” says Jan Krzysztof Frackowiak, a former deputy science minister of Poland and director of the Polish Science Contact Agency in Brussels.

Horizon 2020 will include mechanisms — such as ‘twinning’ EU-12 institutions with better-equipped research institutes in the older member states — that seek to increase the participation of newer member states such as Poland. As an incentive, successful applicants from the new member states will each get an €8,000 salary bonus per year of participation. MEPs and parliament also agreed on a dedicated fund for small- and medium-sized enterprises participating in Horizon 2020.

The provisional research budget of €70 billion now depends on parliament's approval of the proposed overall €960-billion EU budget for 2014–2020.