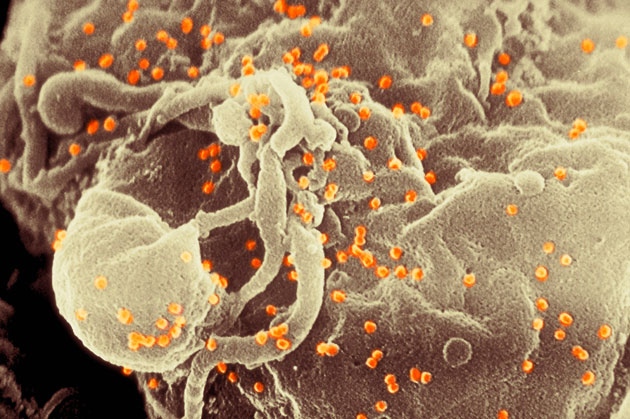 HIV has reappeared in two patients who had seemed to be free of the virus for several months after receiving bone-marrow transplants.

Two patients whom researchers hoped had been cured of HIV have seen their infections return, dashing hopes that the virus had been eradicated from their bodies.

The patients had received treatment similar to that given to Timothy Ray Brown, known as the ‘Berlin patient’. Brown's doctors said in 2009 that he had been cured of the virus by a bone-marrow transplant with cells that were resistant to HIV infection.

Unlike Brown, however, the two ‘Boston patients’ — nicknamed for the Massachusetts city where they were treated — received bone-marrow transplants with cells that were not resistant to HIV. Still, both of them seemed to be free of the virus for months after stopping treatment with antiretroviral medications. But at a meeting on HIV persistence this week in Miami, Florida, researchers reported that the virus has rebounded in both of the Boston patients.

“It’s disappointing and very sobering,” says virologist Deborah Persaud of the Johns Hopkins Children's Center in Baltimore, Maryland, who reported in March that her team seemed to have cured an infant of HIV through treatment with antiretroviral medication.

Other researchers said that the news of the Boston patients was unfortunate, but not entirely unexpected, because they did not receive the same treatment as Brown.

Still, the result is very important for researchers seeking an HIV cure, says Steven Deeks, an HIV researcher and physician at the University of California, San Francisco. “The failure to cure these individuals will certainly influence the conduct of future clinical trials,” he says.

For instance, although the most powerful tests available indicated that the Boston patients were free of HIV after their transplants, it now seems that they were not. “It is now clear viral rebounds can happen at any time, even months after stopping therapy. People will have to followed very carefully for more prolonged periods than in the past,” Deeks says.

The Boston patients had received bone-marrow transplants to treat the blood cancer lymphoma — one underwent the procedure in 2008, the other in 2010. Both continued taking antiretroviral medications after the procedures. Eight months after each man’s transplant, researchers could detect no signs of HIV in his blood. This spring, both men elected to stop taking antiretroviral medications, and they both seemed to continue to remain free of HIV.

Their doctors, HIV specialists Timothy Henrich and Daniel Kuritzkes at Brigham and Women’s Hospital in Boston, announced at a meeting on 3 July that it was possible that the men had been cured.

But other researchers withheld judgement about whether the virus had been eliminated from the men’s bodies, given that the transplanted cells were not resistant to HIV infection.

Henrich and Kuritzkes thought that the men could have been cured by a phenomenon called graft-versus-host disease, a common complication of transplants, in which transplanted cells attack the body’s immune cells. The physicians speculated that this had eliminated all remaining HIV-infected cells.

When they made the announcement in July, Henrich and Kuritzkes said that it was too early to declare a cure, and only a month later, they were proved right. They detected HIV in one of the patients in August, 12 weeks after he had discontinued medication. The second patient kept his HIV in check longer, but the virus rebounded in November, 32 weeks after he had stopped medication.

Both men are now taking antiretroviral medications and are in good health, Henrich said today in a statement. He says that the virus must have been hiding out somewhere in the men’s bodies, which will raise the bar for researchers trying to cure patients of HIV.

“Through this research we have discovered the HIV reservoir is deeper and more persistent than previously known and that our current standards of probing for HIV may not be sufficient to inform us if long-term HIV remission is possible if antiretroviral therapy is stopped,” Henrich said.

Both he and Deeks credited the men who participated in the research. “It is important to recognize the heroic sacrifices made by the study participants,” Deeks said. “The knowledge learned from their participation will shape the cure research agenda for years.”