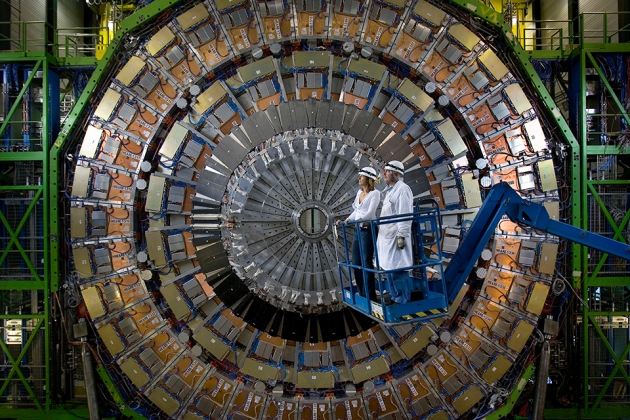 The CMS (pictured) was one of two experiments that saw a potential new particle late last year.

It would have been bigger than finding the Higgs boson and marked the beginning of a new era in particle physics. But new data have squashed the hope that the hints of a new particle detected by the Large Hadron Collider (LHC) would solidify with time. Instead, the intriguing data ‘bump’ — first reported in December — turns out to be nothing more than a statistical fluctuation.

Representatives from ATLAS and CMS — two independent experiments at the LHC — presented the news at the International Conference on High Energy Physics (ICHEP) in Chicago, Illinois, on 5 August. Analyses incorporating almost five times the amount of data used in December show that the signal has faded to almost nothing.

“There is no significant excess seen in the 2016 data,” says Bruno Lenzi, a CERN physicist and part of the ATLAS collaboration, presenting to a standing-room only session at ICHEP.

Presenting directly after Lenzi, Chiara Ilaria Rovelli, a physicist at the National Institute of Nuclear Physics in Rome, piled on the bad news. Additional data from CMS also failed to produce a significant signal. “The modest excess presented in 2015, is unfortunately not confirmed by 2016 data,” she said.

While the announcement was a disappointment to researchers, it wasn’t completely unexpected. The ATLAS collaboration’s most recent update in June put the significance of the signal — a measure of how likely random fluctuations in the data would produce such a bump without a particle — at 2.1 sigma. That was well below the 5 sigma threshold for determining whether a signal is a discovery or just noise.

But because both ATLAS and CMS experiments independently saw the signal — which consisted of slightly more pairs of photons with a combined energy of 750 gigaelectronvolts (GeV) than expected — physicists hoped that the bump was real. It sparked a rash of more than 500 theory papers, which tried to explain the potential new particle.

“Seeing a glimpse of something, even the half a glimpse that makes you hold your breath a moment and think what if — it’s too valuable to be left unexplored,” says Tara Shears, a particle physicist at the University of Liverpool, UK.

History of a bump

Cautious excitement about the bump was driven by its potential payout, says Don Lincoln, a physicist at the Fermi National Accelerator Laboratory near Batavia, Illinois. Physicists know that their highly successful description of forces and matter — called the standard model — is incomplete since it fails to account for mysteries including dark matter and how to reconcile quantum mechanics with gravity. A new particle would have been the first signpost directing physicists towards a new theory, says Lincoln. “Most scientists suspected the excess would go away, but the consequences of it being real led many to spend some sleepless nights hoping that it was.”

The two-photon signal was appealing in part because the analysis behind it was relatively simple and robust. It was also easy to come up with models to explain the bump that didn’t conflict with other experimental results, says Christoffer Petersson, a theoretical physicist at Chalmers University of Technology in Gothenburg, Sweden.

The fact that one possible explanation included the particle being a heavier cousin to the Higgs boson, and potentially just one of a whole new family of particles, also made it appealing, says Guido Tonelli, a physicist at the University of Pisa in Italy and former head of CMS.

Even though all those models are now wrong, Petersson doesn’t view the work as a waste of time. “It was a fun exercise to try to fit different ideas to this experimental result and I did learn a couple of things in the process,” he says.

Statistical fluctuations and discoveries look identical at first, says Lincoln. Such coincidences are always possible when performing thousands of searches and across a wide range of particle masses, and similar hints have appeared and disappeared many times in the past, he says. “You should expect to see this cycle many times in the future.”

But this false alarm does not affect the LHC’s chances of finding something else, says Petersson. “This is not really a more significant blow than the blow from any other LHC search that comes up empty-handed,” he says. So for the experiments and researchers at the LHC, it’s business as usual going forward.

Still, 40 years after the standard model was developed, some physicists are concerned that nothing beyond it has been found, by the LHC or at any previous particle accelerator. And since June 2015, the LHC has been operating at 13 teraelectronvolts (TeV) — near its 14 TeV maximum.

Guy Wilkinson, spokesperson for the LHCb experiment, said it was surprising that nothing unexpected had emerged in the LHC data, adding that he was "slightly breaking with orthodoxy" in saying so. This underscores a growing unease in the community that as time goes on without new findings, the most appealing versions of a popular theory known as supersymmetry become less likely to be true.

But Petersson notes that the chances the machine will find something beyond the standard model are enhanced this year and next. If new particles are rare, or if they decay in ways that are difficult to observe, they could take a long time to emerge, he explains.

Attaining high energies is not the only way to find new particles, says Shears. With enough data, particles that are too heavy to be produced directly could reveal themselves through their subtle influence on other well-known particles, she says. Physicists at CERN’s LHCb experiment have already found hints of such deviations between their data and standard model predictions. But they will need more information to confirm them.

The LHC has only racked up a sixth of the total data physicists hope to collect by the end of 2018. So Tonelli remains optimistic that discoveries are coming. “We know already that sooner or later one of these anomalies will survive all controls and suddenly, crack, everything will change,” he says. “The beauty of our work is that this could happen at any time.”

Additional reactions from the LHCb spokesperson were added to this article after it was first published.