The newly formed Serbian government has defied recommendations from the country’s scientific community: it will not re-establish the dedicated science ministry that was abolished last year.

During a reshuffle of the former government in March 2011, the Serbian science ministry was absorbed into the much larger ministry of education. Since then, say researchers, scientific priorities have been neglected while the ministry struggled with teachers unions over salaries and other issues. 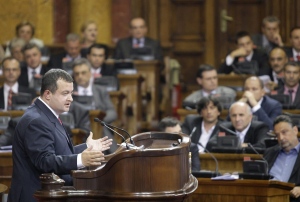 Serbian Prime Minister Ivica Dačić, who took office last week, has promised to increase support for research, but has not created a separate science ministry.

The Serbian Academy of Sciences and Arts in Belgrade lent its support in May, when academy president Nikola Hajdin signed a proposal to establish a separate ministry for science, higher education and technological development. The communiqué was also signed by the chancellors of the University of Belgrade and the University of Novi Sad, and the presidents of the National Council for Science and Technological Development and the National Council for Higher Education.

But when a coalition government was formed last week, it decided to leave science within the education ministry.

Milovan Šuvakov, a theoretical physicist at the Institute of Physics Belgrade who organized the Yes to Science campaign, says that the combined ministry has added a layer of bureaucracy to scientists’ daily lives. The country does not have an independent science funder, so most of the funding comes via the ministry and most purchases have to be approved by the ministry officials.

“When science is separate, there is pressure from the scientific community on their minister” to get things done, says Šuvakov. But in a large combined ministry, he says, science does not get noticed, and signatures for projects and funds are often delayed.

There have been delays of more than a year, for example, in the release of funds for purchasing equipment for five-year projects that were supposed to start in 2011.

But not everyone agrees that a dedicated ministry is necessary. Even though the science academy officially supports the idea of a separate ministry, academy vice-president Ljubiša Rakić says that Serbia would be better off with a more independent science funder.

“It’s a bureaucratic way of thinking, giving ministers and ministries bigger roles than they should have,” he says. “This way of thinking leads small countries to big problems.” Instead, suggests Rakić, the role of the minister should be symbolic, and the ministry should stick to coordinating science, leaving scientific institutions to solve their own problems.

The new government has, at least, promised to continue to support science. In his speech to parliament last week, Prime Minister Ivica Dačić said, “Our strategic aim is to create a society based on knowledge. With that aim, we will increase investments in scientific and research infrastructure, with the participation of industry and the private sector in the financing of science, as a partnership of those who are creating scientific innovations and knowledge, and those who are direct users of that science and knowledge.”

The extra support is sorely needed, scientists say. Research funding has hovered at about 0.3% of Serbian gross domestic product over the past few years, and the country is unlikely to meet its stated target of 1% investment in science by 2015, says Rakić.