Forget 4G — the future of mobile technology is 3D. Researchers in California have built a prototype three-dimensional (3D) display using a method that might one day be developed to create videos that dance above a tablet, mobile phone or wrist watch and can be viewed from a range of angles.

Holography, the gold standard for 3D display, reconstructs the light that bounces off an object at every angle1. A hologram uses a complicated pattern on a plane so that light passing through it diffracts and interferes to produce a life-like image. But, so far, moving holograms — like the ethereal video of Princess Leia in Star Wars (George Lucas, 1977) — remain in the realm of science fiction. This is because it takes much too long to calculate and produce these shifting patterns for any viewing angle.

Now physicist David Fattal and his colleagues at Hewlett-Packard Laboratories in Palo Alto have developed a sort of 'hologram-lite' approach. It uses simple diffraction — not interference — to create 3D images that can be altered at video speeds, as the authors report in the current issue of Nature2.

"It's almost like breaking down a hologram into several finite pieces," Fattal says. It involves etching linear grooves — diffraction gratings — onto a thin glass slab (see image below). Light from light-emitting diodes is then sent sideways through the slab, and some of it is scattered out of the slab in a direction determined by the spacing and orientation of the grooves. The grooves are grouped into circular patterns, each of which sends a light ray out of the slab in a particular direction. 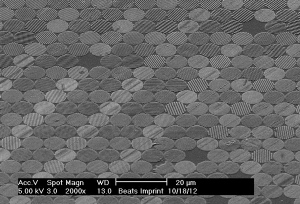 The array of gratings and the directions of the corresponding light beams are fixed. So to create an image, a patterned mask is placed over the fixed array of gratings, so that some escaping light rays are blocked and others are transmitted. This way, the display beams different images in different directions, so that a person's left and right eyes see slightly different images — a requirement for the brain to process an image as 3D. Moving the display screen around also produces different images, so that it appears as if the object were being viewed from up to 64 different vantage points over a field of view spanning 90 degrees.

If individual cells in the patterned mask can be darkened at will — using liquid crystals, as in an ordinary LCD screen — the display can also produce moving images. Figuring out how to modulate the LCD screen to produce the views is orders of magnitude easier than working out the complicated interference patterns needed to make a moving hologram visible from any direction, says Fattal.

And because each circular diffraction grating is just 12 micrometres across, the system is ideally suited to mobile technologies, which are viewed at distances of less than a metre. "When you have a short viewing distance, you need to have a high resolution," says Fattal. "Otherwise it looks like a bunch of big squares."

Existing 3D-display technologies tend to have larger pixel sizes and therefore operate better at distances of a few metres, he says. For example, many commercial 3D televisions use lenses to send underlying light sources in different directions. But the pixels in that case tend to be larger, he explains, because it is difficult to produce small lenses of high optical quality.

Nick Holliman, a computer scientist at Durham University, UK, describes the work from Fattal's team as "a very nice idea and a great technology demonstrator". But he points out that light designed to bleed between each of the 64 different views — to prevent jarring jumps — is 10 times as bright as typically used. "The commercial question is, will consumers be happy with the trade-off of having more viewing freedom with a poorer quality image?"

With further development, the authors say the technology might one day be used for visualisation of the shapes of molecules used in drug development, or for eye-popping views of the Earth.