The origins of Homo floresiensis.

More than a decade after the discovery that a diminutive relative of modern humans once lived on the Indonesian island of Flores, Gerrit van den Bergh was losing faith that he would find any clues to the ancestors of the ‘hobbit’. It was October 2014, and for four years he had co-led an industrial-scale excavation near the cave where the metre-tall skeleton had been found. Then, weeks before packing it in for the year, a local worker found a 700,000-year-old molar. More teeth and a partial jaw quickly followed.

The unusually petite jaw and teeth are from at least one adult and two children — the first possible ancestors of Homo floresiensis ever to be discovered — and resemble the hobbit remains found on the island, which are between 60,000 and 100,000 years old.

The jaw and teeth address two questions that have dogged the study of the species — where did it come from and how did it get so small? But as with all things hobbit, there is little consensus among researchers, who say that firm conclusions require more fossils.

The hobbit’s discovery in 2003 in Liang Bua cave, by a team led by the late Australia-based rock-art specialist Mike Morwood, was an instant sensation. But its place in the human family tree is contentious. Morwood’s team proposed that it was a shrunken Homo erectus, the same species that probably evolved into Homo sapiens in Africa and that roamed as far as Europe and Asia. Other scientists who have examined features of H. floresiensis, such as its long, flat feet, think that it descended from a smaller, more primitive human relative such as Homo habilis or even Australopithecus, known only from remains in sub-Saharan Africa. 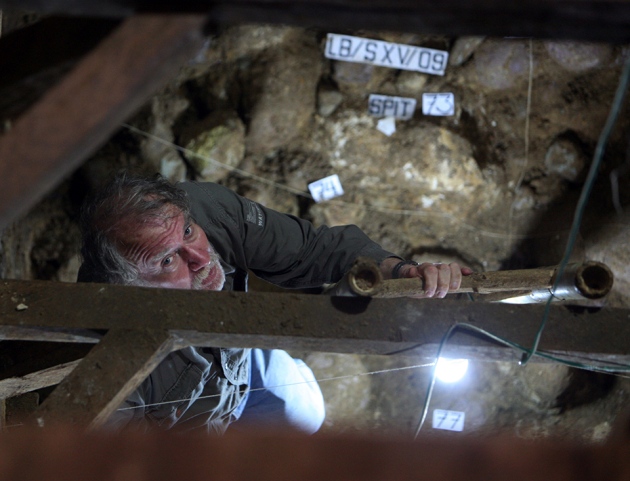 Seeking the hobbit’s ancestors, in 2004, Morwood’s team returned to a site 74 kilometres from Liang Bua called Mata Menge, where elephant bones and tools had been found in the 1960s. The dig started small, but in 2010 the team scaled up. Bulldozers cleared an area of 2,000 metres square, and more than 100 locals then dug for 6 days a week using chisels and hammers. They found hundreds of stone tools, thousands of fossils from animals such as crocodiles, rats and komodo dragons, but no hominin bones.

By then ill with advanced prostate cancer, Morwood visited the area for the last time in 2012. “He really made an effort to walk through the site, you could see he was in pain, but he was so detailed-minded,” van den Bergh says. “He increased the pressure to dig more holes and go faster. He really wanted to find them.”

Morwood, who died in 2013 before the teeth and jawbone were found, is an author on the Nature papers, which were co-led by scientists based in Japan, Australia and Indonesia. 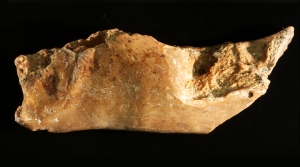 The jaw bone found on Flores is from an adult who was even smaller than the hobbit.

The team concludes that the jaw excavated at Mata Menge is from an adult (its wisdom tooth had erupted) who was even smaller than the hobbit, and that two canines are the milk teeth of two different children. The thin jaw looks more like that of H. erectus and H. floresiensis than the beefier jaws of more primitive hominins such as H. habilis. The square-shaped teeth are intermediate between H. erectus and H. floresiensis. One tooth and the rock around it led the team to estimate that the remains are some 700,000 years old. The oldest artefacts in the region, meanwhile, suggest that a group of Homo erectus arrived on Flores about one million years ago, says van den Bergh.

He and his team note that the remains point to large-bodied H. erectus as the likeliest ancestor of the hobbit, and propose that it became dwarfed in just a few hundred thousand years to cope with the meagre resources on Flores. Elephants and other large creatures have been known to shrink over time to cope with the lack of food typical of islands, and red deer on the island of Jersey in the English Channel became one-sixth of their original size in just 6,000 years, says van den Bergh.

Both Fred Spoor, a palaeontologist at University College London, and palaeoanthropologist Chris Stringer at London’s Natural History Museum agree that H. erectus is now the best fit for the hobbit’s ancestor, although Stringer isn’t so sure that the shrinkage happened on Flores. It’s just as likely that the hobbit emerged on another island, such as Sulawesi, and then moved to Flores, he says.

But William Jungers, a palaeoanthropologist at Stony Brook University in New York, says that the fossils are not complete enough to favour the H. erectus origin: “I don’t believe these scrappy new dental specimens inform the competing hypotheses for the origin of the species one way or another.”

A small river that leads down a hill deposited the sandstone in which the teeth and jaw were found, and van den Bergh expects that more hominin remains lie there. His colleagues, meanwhile, have found stone tools in Sulawesi, north of Flores. For once, the prospect of more hobbits isn’t looking so bleak.