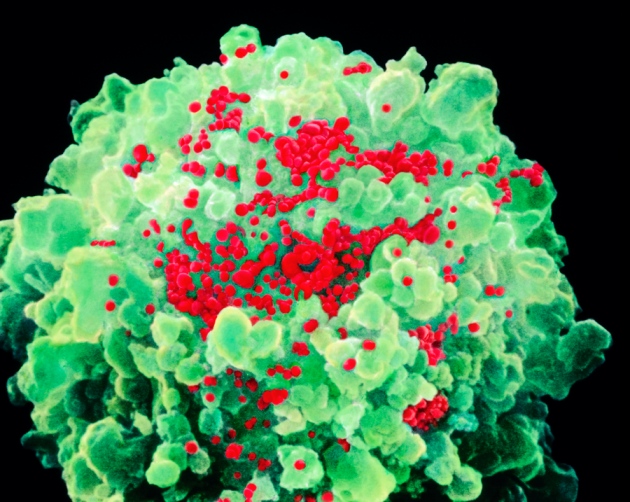 Researchers are not sure why a vaccine to prevent HIV infection increased the rate at which recipients contracted the virus (shown here in red attacking a blood cell).

Evidence is mounting that an experimental vaccine to protect people against HIV increases the risk of infection, according to results presented on 10 October at the AIDS Vaccine 2013 conference in Barcelona, Spain.

This is not the first  report of problems with the vaccine made by pharmaceutical giant Merck, based in Whitehouse Station, New Jersey. In 2007, researchers prematurely cancelled two clinical trials after the vaccine — comprising a vector made from the common-cold virus adenovirus 5 (Ad5) modified to contain HIV genes — proved ineffective at preventing HIV. In the larger of the two trials, called STEP, the vaccine seemed to increase the risk of infection, especially in men. But the risk declined over time and narrowed further when the researchers accounted for factors such as circumcision, sexual activity and previous infection with Ad5.

“I spent most of this year trying to find a non-biological reason for these results,” says Gray. But when her team accounted for biological and lifestyle differences in their participants, it found that the vaccine recipients were still significantly more likely to have HIV. In a separate study, biostatistician Peter Gilbert of the Fred Hutchinson Cancer Research Center (FHCRC) in Seattle, Washington, analysed the STEP and Phambili trials together and found that the vaccine seems to raise the risk of infection by 41%.

Gray says the findings are confusing, as the previous explanation for the increase in infection rate observed in the STEP trial had been that the vaccine briefly overstimulated recipients' immune systems, making them more susceptible to HIV.

Some researchers question the results. Dan Barouch, a virologist at the Beth Israel Deaconess Medical Center in Boston, Massachusetts, is sceptical that the difference in infection risk was as great as Gray’s results indicate. He says the findings are difficult to interpret because most of the patients contracted HIV after they knew whether they had received the vaccine. People who received a vaccine might have been more likely to engage in risky sexual behaviour.

Hildegund Ertl, a vaccinologist at the Wistar Institute in Philadelphia, praised the statistical analysis used by the studies but says it is not clear why the vaccine increases risk.

It is an important question to answer: in April, the US National Institutes of Health in Bethesda, Maryland, shut down a third clinical trial of a different Ad5-based vaccine called HVTN 5051. There is no evidence that this vaccine increased the rate of HIV infection, but researchers plan to follow trial participants closely for the next few years, says Larry Corey, an FHCRC virologist who heads the group that conducted that trial as well as the STEP and Phambili tests.

Clinical trials of new HIV vaccines that use different adenoviruses are now beginning, and Gray says they should proceed with caution. Her group is beginning a clinical trial in South Africa that builds on one conducted in Thailand. The US Military HIV Research Program, based in Bethesda, Maryland, has found that a vaccine containing HIV fragments in a poxvirus reduced the risk of infection by 31% in HIV infections in a general Thai population2. Gray and her colleagues are also continuing to investigate what went wrong in the Ad5 trials so as to avoid similar failures in the future.