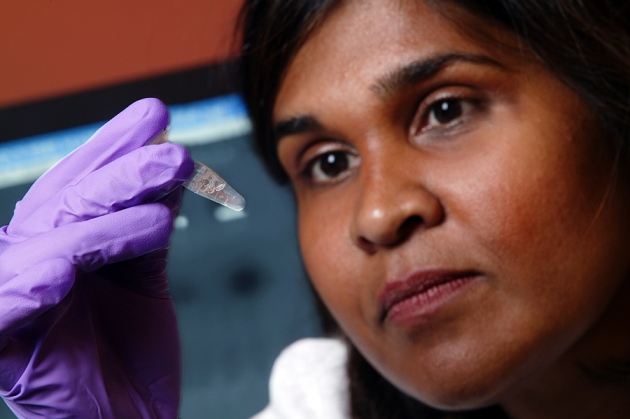 Deborah Persaud, a virologist at Johns Hopkins Children’s Center in Baltimore, Maryland, has been tracking the progress of the 'Mississippi baby'.

“It felt very much like a punch to the gut,” says Hannah Gay, a paediatric HIV specialist at the University of Mississippi Medical Center in Jackson who had treated the girl. The young patient will now face years, if not a lifetime, of antiretroviral therapy. And researchers are now scrambling to determine how this will affect clinical trials aiming to repeat the child's apparent cure.

The ‘Mississippi baby’ was born to an HIV-positive mother who had not received any treatment during pregnancy. Doctors began treating the child by the time she was 30 hours old, but the family stopped antiretroviral therapy at 18 months. She remained off the drugs for the next 27 months with no signs of the virus in her blood1.

The finding encouraged scientists hoping to find a way to save children from a lifetime of antiretroviral treatment. The trial inspired researchers to plan a  federally funded clinical trial to find out whether the results can be repeated in other children.

The trial, which has yet to accrue any patients, is now being re-evaluated, says Anthony Fauci, director of the US National Institute of Allergy and Infectious Diseases in Bethesda, Maryland. “The study is still in play,” he says. Researchers will take a close look at the design, which calls for treatment to be suspended after two years, in some cases. They may also adjust the forms used to tell patients about the possible risks of participating in the study, Fauci adds.

Doctors do not know what caused the virus to rebound in the young girl, who was monitored and tested for HIV every 6–8 weeks. There were no signs of trouble until lab results last week showed that levels of her CD4+ immune cells had dropped. Gay's fears that the virus had rebounded were confirmed a few days later, when tests for HIV came back positive. The sequence of the virus matched that taken from the girl’s mother two years earlier.

Doctors immediately started the girl on antiretroviral medication and her immune cells are recovering, says Gay. She has shown no other signs of infection, such as enlarged lymph nodes.

It is unclear where in her body the virus hid during those 27 months of negative tests. Gay says that the doctors had not examined any tissue samples or spinal fluid from the girl, and that researchers are now discussing whether such samples may be important in clinical studies.

Despite the rebound, the ‘Mississippi baby’ still gives scientists important clues about HIV control, and suggests that early and aggressive treatment can dramatically reduce the HIV reservoir in infants, says Deborah Persaud, a virologist at Johns Hopkins Children’s Center in Baltimore, Maryland, who is involved in the study.

But last week's discovery came as a blow to Gay. ”It was extremely disappointing,” she said. ”We had been hopeful that this would lead to bigger and better things. But mainly, for the sake of the child who is now back on medicine and expected to stay on medicine for a very long time.”