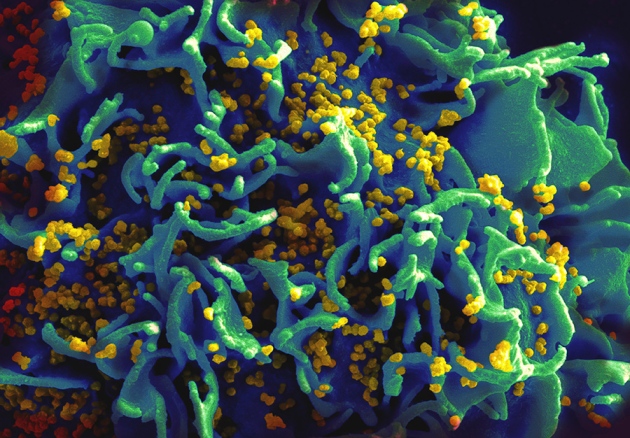 Researchers hope to use CRISPR gene-editing to prevent HIV entering a T cell (pictured, scanning electron micrograph) — or to disable the virus once it has infected the cell.

HIV can defeat efforts to cripple it with CRISPR gene-editing technology, researchers say. And the very act of editing — involving snipping at the virus’s genome — may introduce mutations that help it to resist attack.

At least half a dozen papers over the past three years have explored using the popular CRISPR–Cas9 gene editing technique to combat HIV, but the latest finding, described in a study published on 7 April in Cell Reports1, adds to questions about the feasibility of the approach. However, the researchers involved say that the discovery is a minor setback that does not preclude the idea altogether.

Some researchers aim to edit genes made by the immune cells that HIV usually infects — called T helper cells — so that the virus cannot find a way in. Others take a different tack: equipping the T cells with gene-editing tools so that they can seek and destroy any HIV that infects them.

This approach seemed simple and efficient in tissue culture, says Bryan Cullen, a virologist at Duke University in Durham, North Carolina, who has been using CRISPR to target viruses including HIV but was not involved in the latest study.

When HIV infects a T cell, its genome is inserted into the cell’s DNA and hijacks its DNA-replicating machinery to churn out more copies of the virus. But a T cell equipped with a DNA-shearing enzyme called Cas9, together with customized pieces of RNA that guide the enzyme to a particular sequence in the HIV genome, could find, cut and cripple the invader’s genome.

This seemed to work when a team led by virologist Chen Liang, at McGill University in Montreal, Canada, infected T cells that had been given the tools to incapacitate HIV. But two weeks later, Liang’s group saw that the T cells were pumping out copies of virus particles that had escaped the CRISPR attack. DNA sequencing revealed that the virus had developed mutations very near the sequence that CRISPR’s Cas9 enzyme had been programmed to cut.

To some extent, this was not a surprise: HIV has already shown the ability to evolve resistance to all manner of antiviral drugs (as well as the human immune system). This happens because its genetic material is copied by enzymes that are prone to error. Most mistakes stop the virus working, but occasionally a mutation is beneficial for HIV, allowing it to evade attack.

But Liang thinks that mutations caused by copying errors do not explain HIV’s triumph over CRISPR. Instead, his team contends that the mutations, which involved the insertion or deletion of a few DNA letters, occurred when Cas9 cut the viral DNA.

When DNA is cut, its host cell tries to repair the break; in doing so, it sometimes introduces or deletes DNA letters. These ‘indels’ usually inactivate the gene that was cut — which is how CRISPR works. But sometimes this doesn’t happen. Occasionally, Liang thinks, some of the indels made by the T cell’s machinery leave the genome of the invading HIV able to replicate and infect other cells. And worse, the change in sequence means the virus can't be recognized and targeted by T cells with the same machinery — effectively making it resistant to future attack. “We were a bit excited when we found this,” Liang says.

A team led by molecular biologist Atze Das at the University of Amsterdam reported similar results in Molecular Therapy in February 2. Das says he is not surprised that HIV can overcome CRISPR: “What is surprising is the speed —- how fast it goes.”

Both he and Liang think that the problem can be surmounted, for instance by inactivating several essential HIV genes at once, or by using CRISPR in combination with HIV-attacking drugs. Gene-editing therapies that make T cells resistant to HIV invasion (by altering human, not viral, genes) would also be harder for the virus to overcome. A clinical trial is under way to test this approach using another gene-editing tool, zinc-finger nucleases.

Cullen agrees that the resistance does not mean that there will never be a CRISPR-based treatment or cure for HIV. But he questions whether a therapy using CRISPR — which would require genetically modifying a substantial number of a patients’ T cells — is suited for tackling the virus; especially since it is increasingly possible to manage most HIV infections with cocktails of antiretroviral drugs. “To me, it’s pie in the sky,” he says.