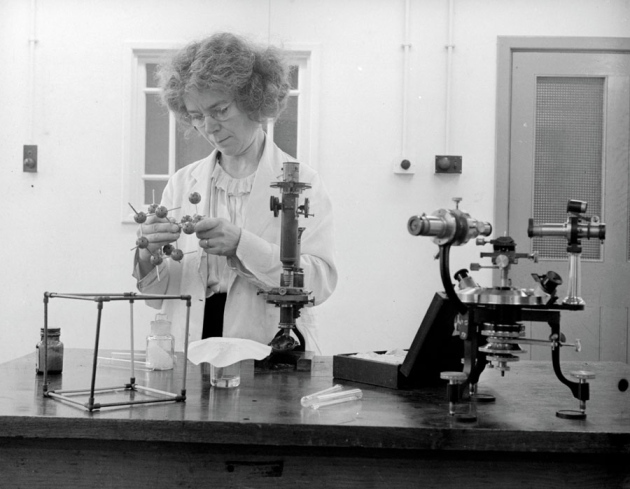 Pioneer: Kathleen Lonsdale was one of the first women to be elected to the Royal Society.

“It takes a very special breed of scientist to do this work ... it is an area of science in which women dominate.” So said the professor introducing distinguished British crystallographer Judith Howard in 2004 as she received an honorary degree from the University of Bristol, UK.

Some 15 years previously, Howard had received an invitation to apply for a new chair in structural chemistry at Durham University, UK, framed in similarly irksome terms: “because aren't women supposed to be good at that sort of thing?” Her former PhD supervisor, the Nobel prizewinner Dorothy Hodgkin, encouraged Howard not to let such comments get in her way. Howard got the job, established one of the world's leading laboratories for low- and variable-temperature structural chemistry, served as head of the department of chemistry, was elected a Fellow of the Royal Society and became the founding director of Durham's interdepartmental Biophysical Sciences Institute.

Whatever their level of distinction, female crystallographers have always in fact been in the minority. But there is a relationship between the outstanding achievements of some of them and the reputation and culture of the field that is worth examining as we celebrate the International Year of Crystallography. I would argue that the features of this field that have attracted, retained and encouraged women have lessons to offer for the future of women's progress in science more generally.

Women were among crystallography's earliest pioneers. William Bragg, co-discoverer of X-ray crystal analysis with his son Lawrence a century ago, recruited Kathleen Lonsdale to his laboratory in 1922. Working at the Royal Institution in London, she confirmed the structure of the benzene ring, carried out studies of diamond, was one of the first two women to be elected to the Royal Society (in 1945), and was appointed the first female tenured professor at University College London.

Hodgkin was one of several women who joined the lab of the physicist John Desmond Bernal (a former Bragg student) in Cambridge, UK, in the 1930s, and with him she took the first X-ray photographs of crystalline proteins. Her solutions of the structures of penicillin and vitamin B12 won her the Nobel Prize in Chemistry in 1964. Of the four women who have won the chemistry Nobel, two were crystallographers: Hodgkin and the Israeli scientist Ada Yonath, who was awarded the prize in 2009.

Rosalind Franklin is chiefly remembered for taking the X-ray photograph of a DNA fibre that proved instrumental to James Watson and Francis Crick's Nobel-prizewinning discovery of the double helix. In her short life (she died of cancer in her 30s), she also carried out important structural studies of carbon in coal and graphite, and of plant and animal viruses.

Isabella Karle of the United States Naval Research Laboratory developed an experimental approach to using 'direct methods' of structural analysis for the solution of molecules smaller than 1,000 atoms. Her application of this statistically based technique for estimating the phases of the X-ray reflections enormously expanded the range of substances that could be tackled. Yet only her husband Jerome shared the 1985 Nobel Prize in Chemistry with Herbert Hauptman, for developing the theoretical underpinnings of the method. Other prize-giving bodies have showered Isabella with awards in her own right.

Women's names adorn many of the textbooks and research resources in the field. Lonsdale edited the International Tables for Crystallography for many years. These volumes provide information on crystal lattices, symmetry and space groups, as well as mathematical, physical and chemical data on structures. Olga Kennard of the University of Cambridge founded and ran the Cambridge Crystallographic Data Centre, an internationally recognized source of structural data on small molecules, from 1965 until 1997. Jenny Pickworth Glusker of the Fox Chase Cancer Center in Philadelphia, Pennsylvania, co-authored Crystal Structure Analysis: A Primer, first published in 1971 and now in its third edition (2010). Eleanor Dodson of the University of York, UK, who began as Hodgkin's technician, was the main instigator behind CCP4, the collaborative computing project that currently shares more than 250 software tools with protein crystallographers worldwide.

But the widespread assumption that these illustrious figures reflect a predominance of women in the field is false. More than two decades ago, the US mathematical crystallographer Maureen Julian of the Virginia Polytechnic Institute and State University (Virginia Tech) in Blacksburg tallied the entries in the World Directory of Crystallographers and found that the proportion of women was 14% internationally (and slightly lower in the United States)1. At the time, only 2% of the members of the American Physical Society were women; Julian concluded that a percentage in double figures gave the impression that the field was “saturated with women”.

Today, the International Union of Crystallography's online list of eminent crystallographers (go.nature.com/g5iarg) is more than 90% male. Its prestigious Ewald Prize, awarded triennially since 1987, has had one female recipient (Dodson) out of 14 (7%). 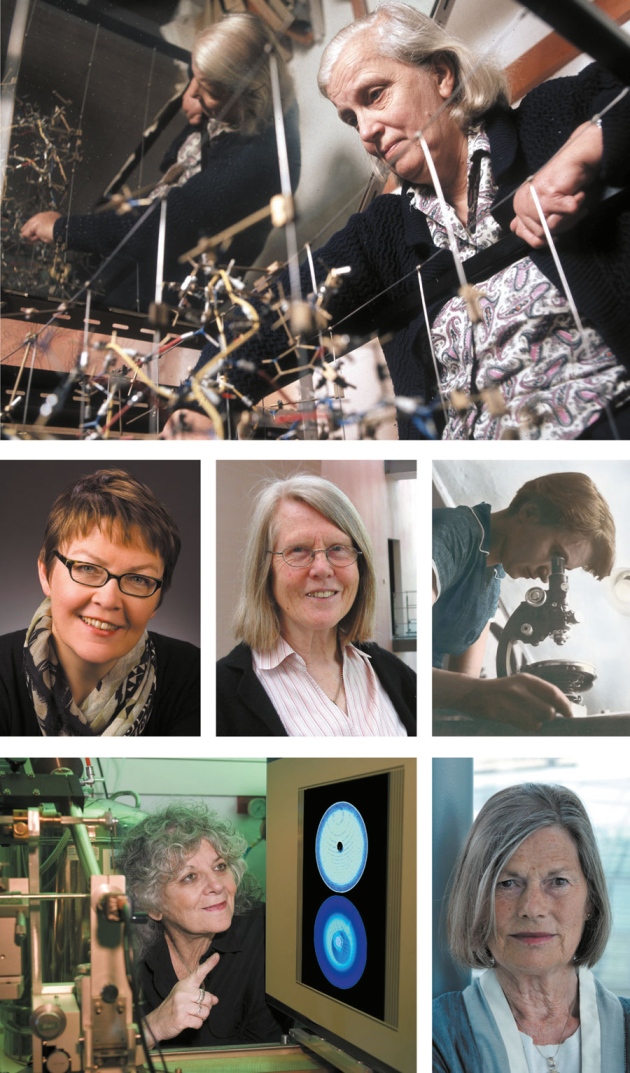 There are grounds, however, for believing that the field of crystallography was unusually welcoming to women at its foundation a century ago, at least by comparison with other branches of physical science. In her 1990 study1, Julian also traced a scientific genealogy starting with the Braggs, through colleagues both male and female, to a total of 50 female crystallographers. Bragg protégés such as Lonsdale and Bernal and their students fostered diverse and egalitarian lab cultures.

That pedigree could now be greatly extended. For example, the British protein crystallographer David Phillips worked with Lawrence Bragg at the Royal Institution from 1955 to 1966. Phillips recruited Louise Johnson as a PhD student, and when he moved to the University of Oxford, UK, in 1966, she went with him. There, the Phillips group worked alongside Hodgkin and her international, gender-balanced and left-leaning team. In 1990, Johnson succeeded Phillips as professor of structural biology, and from 2003 to 2008 was also director of life sciences at the Diamond Light Source, the United Kingdom's national synchrotron facility.

Susan Lea is professor of microbiology in the Sir William Dunn School of Pathology at Oxford. She did her PhD there in the late 1980s with structural biologist Dave Stuart. It did not occur to her to look for a female role model, because she was surrounded by them. “Louise [Johnson] was the head of structural biology, and there were a lot of women in biophysics at Oxford,” says Lea, “so I never really thought about it.” She remembers “a very good atmosphere”, citing the normality of children being around in the lab: “It was expected that if you were bright you would get the job done.” In 1995, having completed her PhD on structural studies of the foot-and-mouth disease virus, Lea was one of the first to receive a Dorothy Hodgkin fellowship from the Royal Society, designed to allow some flexibility around family and other commitments for early-career scientists. Her first child was born a year later.

That collaborative ethos owes as much to the nature of the science as to the benevolent legacy of the Braggs. “It's a science that, when practised well, tends to involve six to eight disciplines,” explains Lea. “One minute I'm talking to a virologist, the next a crystallographer, the next an immunologist.” For Hao Wu, who uses structural techniques to study innate immunity at Harvard Medical School in Boston, Massachusetts, this interdisciplinarity was a prime attraction. “I had no clue about other women crystallographers when I started,” she says. “What attracted me was that it had mathematics, physics and biology in it.”

As she neared her graduation in medicine in Beijing, Wu was fascinated by a lecture from Michael Rossmann, visiting from Purdue University in West Lafayette, Indiana. Rossmann is a mathematical crystallographer who met Lonsdale as a schoolboy, did a PhD with J. M. Robertson (a former Bragg student), and worked with molecular biologist Max Perutz (a student of Bernal's) on the solution of the haemoglobin structure. Wu subsequently secured a PhD place in Rossmann's lab. Structural analysis is “like a detective story”, she says. “There is no direct path from diffraction to structure,” so it appealed to her in requiring a broad range of skills, from growing and mounting crystals to computer analysis.

One downside of crystallography's reputation as a technical discipline, and one sometimes perceived to be 'women's work', is that for a while, other scientists (particularly chemists) saw it as a laboratory service, and not a science in its own right. When Hodgkin's team at Oxford finally solved the complex structure of vitamin B12 in 1955 (ref. 2), the result was trumpeted in The New York Times as the work of Alexander Todd at the University of Cambridge, UK, whose chemical analyses of B12 were published3 in Nature back to back with an earlier paper by the Oxford team4. Todd also gave the first talk on the structure at the 1955 meeting of the Chemical Society at the University of Exeter, UK — Hodgkin stood up at the end to make clear exactly who had done what.

Glusker, who as Hodgkin's postdoc undertook the analysis of a key derivative that broke the back of the problem, remembers how indignant they all were (see go.nature.com/o74dse). “We thought he viewed us just as technicians and did not realize the amount of thought that went ... into devising which electron-density maps to draw, which parameters to refine and how to do this.”

“Women's names adorn many of the textbooks and research resources in the field.”

Modern crystallography is now very different. Much of the trial-and-error process has gone, because almost all the stages of X-ray crystal analysis have been automated, turning the spotlight onto the meaning and relationships of structural features, rather than the structures themselves. “Nowadays it's not possible to publish a structure on its own in a high-impact journal,” says Irmgard Sinning, professor of biochemistry and structural biology at the Heidelberg University Biochemistry Center in Germany.

Sinning studies protein-targeting systems, and has just been announced as a 2014 recipient of Germany's top research award, the Gottfried Wilhelm Leibniz Prize. “Crystallography has developed tremendously in the past two decades,” she says, “and solving the structure often takes less time than working out the molecular mechanism.”

She now recruits more biochemists than chemists to her lab, about half of them women. Overall, the number of women in crystallography is climbing. I analysed speaker lists from various science meetings, and found that at the European Crystallography Meeting in August 2013, 27% of the speakers were women. This compares with around 21% at the 2013 European Physical Society Conference on High Energy Physics, and 43% at the 2013 International Congress of Immunology. The numbers of women entering research careers are increasing across the physical and life sciences, with most in biomedical fields. But recent evidence suggests that they still have a harder time than their male colleagues in making it to the top (see, for example, www.nature.com/women).

“Today it's more demanding to balance a family and a career,” says Wu, who has recently been appointed to a chair. Howard, too, is concerned: “There's a drop-off at postdoc level and beyond.” Sinning urges younger women to have more confidence in themselves when applying for promotions: “Just do it! A guy would never say 'Am I good enough?' — they automatically think they are.”

Crystallography has shining examples of successful women who inspire and support younger colleagues. But junior scientists still face too many obstacles in their progression through the ranks. Perhaps an important goal for this International Year of Crystallography would be to ensure that the Braggs' legacy of equal opportunities is replenished.