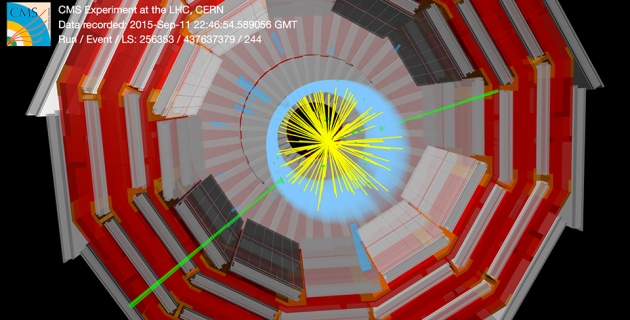 Particle collisions that produce two photons of a certain energy are unexpectedly prevalent at the LHC.

Hints of a mysterious new particle at the world’s largest particle accelerator just got a little stronger. The excess of photons produced by particle collisions at the Large Hadron Collider (LHC) has kept physicists abuzz since it was discovered three months ago. Now the use of fresh data by one LHC experiment has made the signal slightly more statistically significant — but it still falls well short of the certainty needed to claim a discovery.

In December, physicists announced that they had seen an excess of pairs of γ-ray photons with a combined energy of around 750 gigaelectronvolts. The data came from ATLAS and CMS, the two largest detectors at the 27-kilometre-circumference LHC at CERN, the European particle-physics laboratory near Geneva, Switzerland.

The excess seen by the CMS experiment has now become slightly more significant, owing to a fresh analysis reported on 17 March at a conference in La Thuile, Italy. But to the disappointment of many, the analysis presented by ATLAS on the same day, which did not contain new data, did little to change the status of the mysterious excess. In fact, the significance seen by ATLAS went down a bit as a result of the analysis, which was a more conservative interpretation of the data-set than previously, says Marco Delmastro, the physicist at the CNRS Theoretical Physics Laboratory in Annecy-le-Vieux, France who presented the ATLAS results.

The data set used in the latest CMS analysis is 22% larger than the one that the experiment reported in December, because it includes collisions from early in the LHC’s 2015 run, when the detector’s magnet was switched off owing to a problem in its cooling system. The magnetic field affects detector electronics, so data taken without the field needed careful and separate calibration. “The good news is, we now we have almost as much data as ATLAS,” says James Olsen, physics coordinator for CMS and a physicist at Princeton University in New Jersey.

Bumps in the road

The CMS team has also recalibrated the full data set — something that researchers do at the end of each run to account for how radiation affects their measurements.

With the additional data and the tweaked calibration, the statistical significance of the CMS bump has now gone up from 1.2 to 1.6 sigma, said Pasquale Musella, a physicist at the Swiss Federal Institute of Technology in Zurich, at the La Thuile conference on Thursday.

“The fact that their excess has gone up is a hopeful sign,” says Delmastro, referring to the CMS results. “But caution is necessary. Statistics is a harsh mistress,” he adds, paraphrasing the title of a science-fiction novel by Robert Heinlein.

The significance reported by CMS is still far below physicists’ threshold for a discovery: 5 sigma, or a chance of around 3 in 10 million that the signal is a statistical fluke. Moreover, although the calculation takes into account the ‘look elsewhere’ effect — in which deviations from the expected are more likely when scouring a wide range of energies than when looking at a specific, pre-established window — it does not consider that photons are just one of many end products that LHC physicists test, warns Marumi Kado, the physics coordinator of ATLAS and a physicist at the Linear Accelerator Laboratory at the University of Paris-Sud. Yet conducting many searches increases the odds that at least one such ‘channel’ will contain some statistical fluctuations.

Further hints about the excess could emerge as soon as next week, from more talks at the La Thuile meeting: bumps could have appeared in other searches, as the particle decays into something other than two photons. So far, such searches, including one presented earlier this week at CERN, have found nothing, but physicists say that the 2015 data sets may be too small to show bumps in those other modes of decay.

If the excess is a genuine sign of a particle, it would most probably be a boson — a type of particle typically associated with one of the fundamental forces — that no one had predicted. Physicists at the LHC and elsewhere say that such a discovery would be the most important in particle physics since at least 1975, when the unexpected τ lepton was discovered. By contrast, the Higgs boson, discovered in 2012, was predicted by the standard model of particle physics. “It would be the first detected in a collider experiment beyond the standard model,” Olsen says.

“If it’s truly a new signal, it’s incredibly interesting,” says Kado. "It would open up so many possibilities, so many questions. Studying it would be wonderful.”

But statistical bumps often go away after more data are collected, so Kado and others still urge caution. “Our job is to doubt — to always check for possible problems,” he says.

Even so, theoretical physicists have been in a frenzy. “In the Theory Division, it’s all we talk about,” says CERN theorist Gian Francesco Giudice. “Theorists are more emotional,” he says. “Experimentalists are by nature more cautious, especially in their official statements.”

Since the December announcements, theoretical physicists have posted 285 (according to a count kept by a CMS physicist) papers in the arXiv online repository purporting to explain the excess, but no consensus has yet emerged on what such a particle could be. Especially interesting is that the particle would probably not be a “lone wolf”, Giudice says, but would be one of many related particles yet to be discovered. “It’s reasonable to think that it’s just an animal that strayed away from its pack, but that there is a pack somewhere to be found.”

The LHC’s beams were shut down over winter for maintenance, but in the next few weeks they will be colliding particles again. New high-energy collisions will begin in April. Physicists say that by June, or August at the latest, CMS and ATLAS should have enough data to either make a statistical fluctuation go away — if that’s what the excess is — or confirm a discovery.

An earlier version of this article incorrectly stated that Pasquale Musella is a staff CERN physicist; he is at the Swiss Federal Institute of Technology in Zurich.