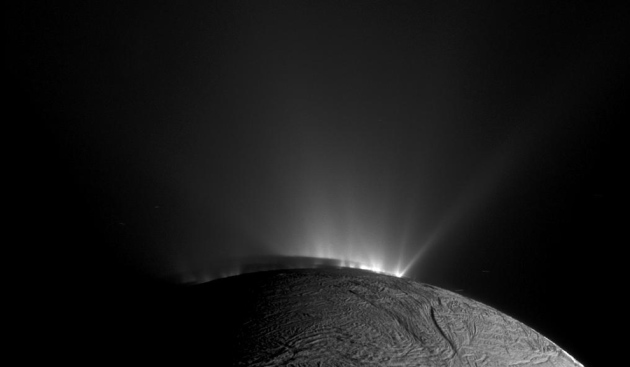 Water plumes that spew from Enceladus's atmosphere may be related to hot springs in the moon's ocean.

Hot springs seem to be percolating on Saturn's moon Enceladus, at the bottom of its buried ocean. The discovery, the first known instance of hydrothermal activity happening beyond Earth, is likely to bolster efforts to send spacecraft to hunt for signs of life there.

The international Cassini spacecraft has measured tiny silicon-rich particles streaming from Enceladus, planetary scientists report in the 12 March issue of Nature1. The size and chemical make-up of the particles suggest that they come from hydrothermal activity, where the moon’s ocean meets the underlying rock.

This means that the spectacular water plumes that spew from Enceladus almost certainly tie in to these deep hot springs. “We show that what’s happening on the surface is connected to the subsurface ocean,” says Hsiang-Wen ‘Sean’ Hsu, a planetary scientist at the University of Colorado, Boulder, who helped to lead the research. “And at least part of the ocean could be quite warm, actually active right now in terms of hydrothermal activity.”

On Earth, water and rock interact in underwater hot springs to generate life-friendly chemicals on which bacteria and other creatures can thrive. Several plans for spacecraft missions are under development in the United States, Europe and Japan that would hunt for signs of life in the Enceladus plumes.

The case for visiting Enceladus has been building in recent years. In 2009, researchers reported finding salt grains in one of Saturn’s famous rings, which is formed by particles coming from Enceladus2. In 2011, they argued that those grains were coming from a salty ocean on Enceladus3. And last year, another team used gravity measurements from Cassini to nail the case for a subsurface ocean4.

Now, Hsu’s team describes particles made not just of salt but also of silica. That is important because it implies that the hot springs are active now and had not just been operating at some point in the distant past. “If you find salt, that could mean the water is in contact with rocky material,” says Hsu. Finding silica means that water and rock are interacting right now,  at relatively hot temperatures. 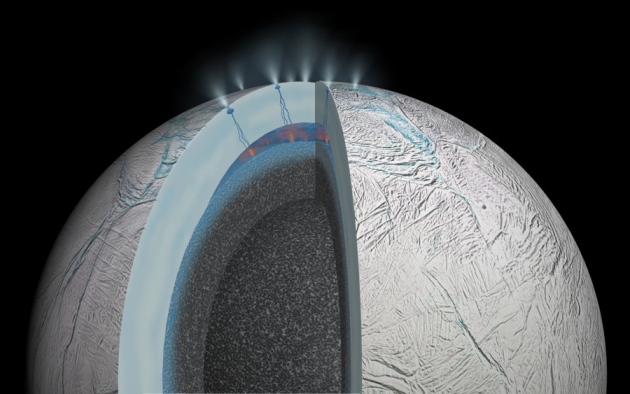 Evidence suggests that hot springs on the floor of Enceladus's ocean spray jets through the moon's icy crust.

On Enceladus, the silica particles probably precipitate out from the hot springs, then become trapped in frozen droplets and rocket upward from the sea floor. They spray out as part of the plume, and eventually fall into orbit around Saturn. Some seem to escape from there into space, where Cassini sees them.

Carolyn Porco, a planetary scientist at the Space Science Institute in Boulder, says the discovery is another clue to what might be going on in Enceladus's ocean. “It’s telling us there are possibly habitats on the sea floor in which organisms that we know exist on Earth could possibly exist on Enceladus,” she says. “Whether they’re there or not is the $64 million question.”

Porco and other researchers have just submitted a proposal to NASA to fly an Enceladus Life Finder mission, a spacecraft that would hunt for chemical signatures of life in the Enceladus plume.

In the meantime, Cassini has three final close fly-bys of Enceladus at the end of this year, before its final plunge into Saturn in 2017.