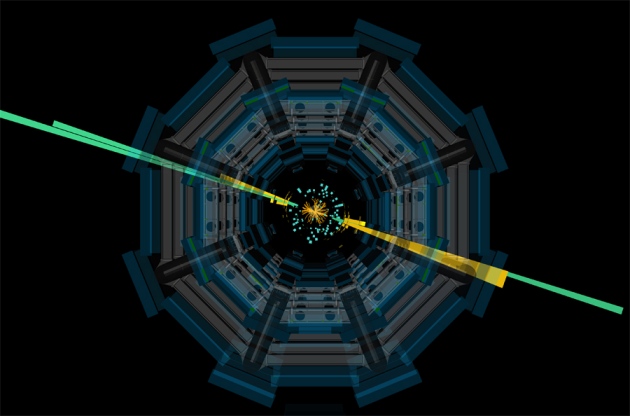 A reconstruction of a particle-collision event at the ATLAS detector.

TREND WATCH: Theoretical physicists are churning out papers at a remarkable rate as they rush to analyse tantalizing hints of a new particle in data from the Large Hadron Collider (LHC).

Experimenters revealed their observations in a 15 December announcement at CERN, the European laboratory of particle physics that hosts the LHC near Geneva. Since then, 150 research manuscripts have been posted to the preprint server arXiv discussing the hypothetical particle, even though the statistical significance of the findings is low (see 'Hint of new boson sparks flood of papers'). 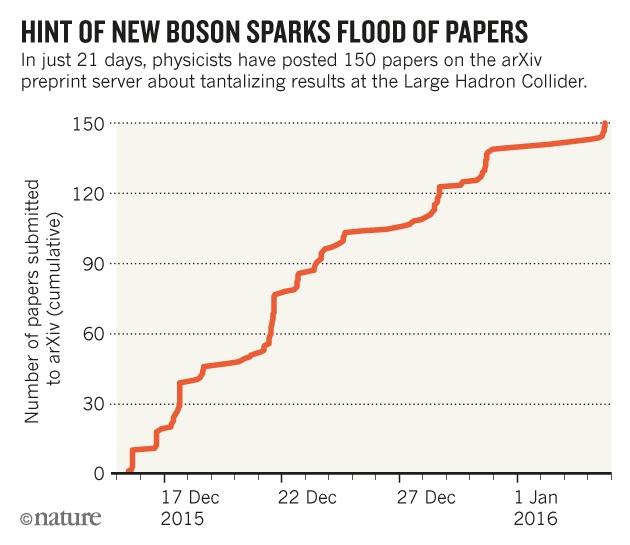 The surge of interest was anticipated; Tiziano Camporesi, a spokesperson for the LHC’s CMS experiment, told Nature just after the webcast announcement that he expected to see hundreds of preprints in the next two weeks.  “I am extremely curious to see what our theorist friends will cook up,” he said.

The influx of articles dwarfs two previous events that excited theorists, says Paul Ginsparg, a physicist at Cornell University in Ithaca, New York, who founded arXiv. One wave of manuscripts followed the controversial announcement that neutrinos could travel faster than light, as spotted by the Italy-based experiment OPERA in 2011; another came after the discovery of gravitational waves using the South Pole-based BICEP2 telescope in 2014. Neither of those claims held up after scrutiny.

It is all the more remarkable in that, unlike the earlier cases, the particle claims from the LHC have not yet been put into writing. “This is all based on the live webcast from the CERN event,” Ginsparg says. Submissions to arXiv made after 16.00 US Eastern Standard Time each day do not appear until the following day — a cut-off time set by arXiv’s operators — and the timing of the submissions shows that physicists are rushing to e-mail in their papers just before this deadline, Ginsparg adds.

CERN theorist Gian Francesco Giudice and his collaborators posted a 32-page paper analysing the findings on the same day as the announcements were made; it already has more than 100 citations. Giudice says that the hypothetical particle is not easy to reconcile with supersymmetry (SUSY), physicists’ preferred way of extending the currently successful 'standard model' of particle physics, which posits that each particle in the standard model has a heavier partner. “It doesn’t smell like SUSY,” he says.

But many of the papers on arXiv have tried to make the particle — which some theorists have dubbed ‘S’ — fit with SUSY anyway, perhaps in the hope that SUSY could yet recover from a disappointing string of 'non-discoveries' at the LHC and elsewhere.

Other possibilities are that the particle is a heavier cousin of the Higgs boson, discovered at the LHC in 2012, or that it is a ‘graviton’, a particle that would carry the gravitational force, in a similar way to how photons carry the electromagnetic force.

Although the particle could very well be a fluke signal that disappears as further data from the LHC come in, theorists’ time is still well spent analysing it, says theoretical physicist Lisa Randall of Harvard University in Cambridge, Massachusetts. “It doesn't necessarily hurt for people to think about what would give you such a signal,” she says. “Even if the signal goes away, you often learn a lot about what’s possible.”

Since this article was published on 24 December, the number of papers posted on arXiv has risen from 95 to 150.