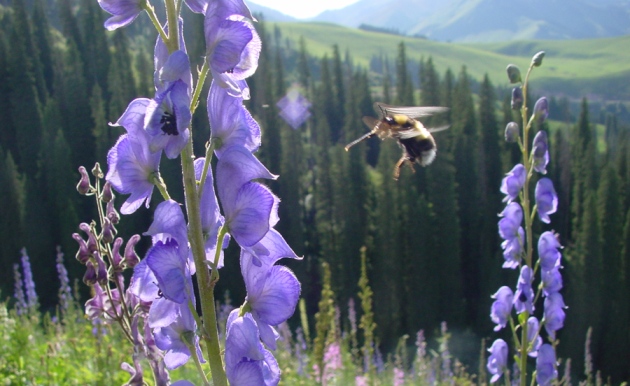 Bumblebees have been observed foraging as high as 5,600 metres, but they can cope with the low air pressure at much higher elevations.

Alpine bumblebees can hover happily in pressure conditions equivalent to an altitude of 9,000 metres — higher than the peak of Mount Everest. They manage this mountainous feat by beating their wings in broader strokes, a laboratory study has found. Although there is no food to be harvested on Himalayan peaks, the bees' adaptable flight might help them to escape predators elsewhere, the authors suggest.

“My first reaction was ‘Wow, that’s high,’” says Douglas Altshuler, who studies animal flight at the University of British Columbia in Vancouver, Canada, and was not involved in the work. The bees flew at simulated altitudes “much higher than I would have expected”, he says. ”But it’s a very convincing piece of work.”

Bumblebees are often found above 4,000 metres and have been recorded foraging as high as 5,600 metres. At higher elevations, reduced air density would make it harder to create lift with each wing beat, and a fall in oxygen levels would push the limits of the bees' metabolic systems. But the physiological factors that might stop the insects reaching high altitudes are not well understood.

In a study published today in Biology Letters1, two zoologists, Michael Dillon, now at the University of Wyoming in Laramie, and Robert Dudley of the University of California, Berkeley, tested whether bumblebees’ vertical range was limited by aerodynamics and physiology.

Working in the mountains of Sichuan, China, the duo caught five male bumblebees (Bombus impetuosus) foraging at 3,250 metres and placed them in a plexiglas chamber. Once the bees began to fly upwards, the pressure inside the chamber was reduced using a hand pump to simulate altitude increases in 500-metre intervals. All five bees could hover at air pressures equivalent to elevations of 7,400 metres; three could fly above 8,000 metres; and two got to above 9,000 metres.

To work out how the bees did it, Dillon and Dudley analysed video footage taken from directly above the flight chamber. They observed that the bees did not alter the frequency of their wing beats. Instead, the insects increased the angle through which they beat their wings. “They’re essentially sweeping their wings through a wider arc, which means they’re pushing down more air molecules,” says Dillon. “Increasing the frequency of wing beats is one way to do that but it’s probably very energetically expensive, so it’s likely this is a cheaper alternative.”

However, that does not mean that bees could actually fly up Everest. Temperatures fall as altitude increases and the chill above 5,000 metres would provide a formidable challenge for bumblebees. Such changes were not simulated in the flight chamber. “My opinion is that, even if they’re OK with the decreased oxygen and air density, the low temperatures could prevent them from hovering effectively up there,” says Altshuler.

If so, why do alpine bumblebees have that extra capacity for upward thrust? Dillon suspects that it is required for other tasks, such as escaping predators and carrying heavy loads. “If they were already maxing out their performance just to fly at, say, 4,000 metres, they would have no excess capacity to tank up on nectar and pollen,” he says. “And we know they’re capable of carrying double their body weight in nectar and pollen.”

Altshuler agrees. “Unless there is some unknown reason why bees want to be at 8,000 metres, then this extra capacity has to be for something else,” he says.