High-school student Kevin Terris first spotted the dinosaur bone jutting out of a large boulder, in an area of southern Utah that professional palaeontologists had already vetted and dismissed.

The campus of Terris’s school in Claremont, California, includes the Raymond M. Alf Museum of Palaeontology, and students often accompany museum palaeontologists on their fossil digs. Andrew Farke, a palaeontologist at the museum, checked the bone that Terris had found. “I told him it was just a dinosaur rib, and we weren’t going to bother with it,” he says. “Ribs are really common and they don’t have much significance.”

But on the other side of the boulder, Farke picked up a rock and found the skull of a young dinosaur staring back at him. “I said, ‘Kevin, let’s look at that rib again.’”

The ‘rib’ turned out to be a set of toe bones, and the boulder yielded the most complete skeleton ever found of Parasaurolophus — a duck-billed dinosaur, or hadrosaurid, which lived around 75.5 million years ago. The almost two-metre-long individual, unearthed in 2009, had none of the annual growth rings typically found in dinosaur bones, implying that it was a juvenile and probably less than a year old. The team nicknamed it Joe. 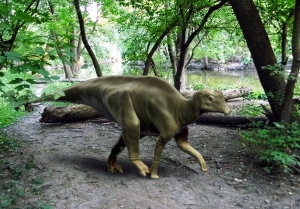 A reconstruction of the baby Parasaurolophus and the environment in which it lived, around 75.5 million years ago.

“Hadrosaurids are among the best-represented groups of dinosaurs in the fossil record,” says Merrilee Guenther, a palaeontologist at Elmhurst College in Illinois. Young specimens have helped scientists to flesh out how similar animals grew up, but none had been found for Parasaurolophus until now. “The size of this specimen, along with its degree of completeness and the quality of its preservation, make it particularly valuable,” adds Guenther.

Dinosaurs typically grew quickly, and Joe was no exception — the specimen is around one-quarter of adult size despite its presumed young age. It had already started developing the curved, tube-like head crest that is the distinguishing feature of Parasaurolophus. That surprised Farke, because the crests of other hadrosaurids started developing only when they were half-grown. “By starting the growth early and continuing at a rapid rate, Parasaurolophus could get this bizarre crest that was bigger than those of its close relatives,” suggests Farke.

Kevin Terris with a fragment of the specimen he discovered in Utah.

“It's a truly remarkable specimen of a rare and iconic dinosaur,” says David Evans, a palaeontologist at the University of Toronto in Ontario, Canada. “It demonstrates that Parasaurolophus underwent radical changes in skull shape from hatchling to adult, but it started in a fundamentally similar anatomical place as other closely related species.”

Many scientists speculate that the hollow crest was a trombone-like device for amplifying the animal’s calls. If so, the young specimen would have produced a higher-pitched sound than adults. Alternatively, Parasaurolophus might have used its crest to display to mates — a function that is consistent with the small headgear seen on this immature specimen.

As well as publishing the skeleton's description in the open-access journal PeerJ1, Farke’s team has made all the data about the specimen freely available online, including images of skin traces and three-dimensional scans of the whole skeleton. “This is the first time that anyone has put this much data for a single specimen out in the wild,” Farke says. “If someone wants to 3D print the entire skeleton, they can. We want to make it really easy for people to check or build on our results.” 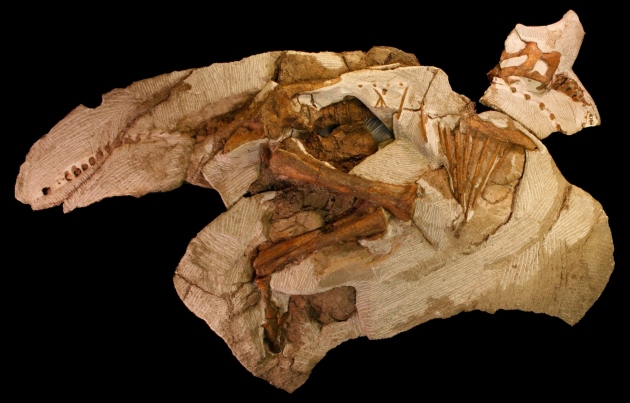