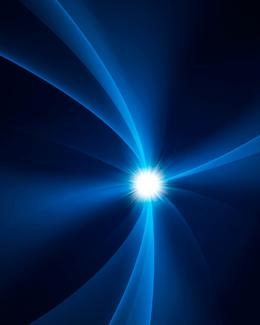 Physicists have devised a way to craft pulses of gamma rays with precise shape and timing from single-photon sources. The high-energy photons could carry information in quantum communications or help to improve techniques that use radiation to probe materials’ composition and magnetic fields.

Gamma-ray photons have at least 10,000 times the energy of visible-light photons and much shorter wavelengths, making them easier to detect and focus. But because they are produced by spontaneous radioactive decay or by pushing electrons to near light speed in a particle accelerator, they have so far proved difficult to harness as controlled sources of single photons.

In the new work, a team led by Olga Kocharovskaya, a physicist at Texas A&M University in College Station, used radioactive cobalt to produce ultra-short (100 nanosecond) pulses of single photons which are ‘coherent’. In particular, this means that successive pulses are all separated by the same distance, says Kocharovskaya.

Left alone, cobalt-57 releases pairs of consecutive photons spontaneously after one of its atoms undergoes nuclear decay to become iron-57. The photons' waveforms spread across time and decay exponentially. But in the experiment, described online today in Nature1, individual photons are absorbed and re-emitted by the nuclei of iron atoms in a sheet of stainless-steel foil and later detected.

The process is reminiscent of fluorescence, in which an atom absorbs a photon (typically of relatively low energy) by kicking one of its electrons into a higher-energy orbit, and then emits another photon as the electron falls back into its earlier state. In the case of the iron nucleus, however, it is the subatomic particles contained in the nucleus that go into a higher-energy state rather than an electron.

In the experiment, Kocharovskaya's team vibrates the foil sheet. As the foil moves, the photon can be absorbed at various distances from the source, and thus the re-emitted photon will take a different time to hit the detector. In this way, the vibration controls when a photon is likely to hit the detector.

The combination of the foil's regular wave-like motion with a photon's original decay path results in a photon waveform that is a series of fading, coherent pulses spaced evenly apart. As the decay of cobalt-57 releases gamma-ray photons in pairs, Kocharovskaya and her team also use the detection of the first photon as a trigger to herald the arrival of the second. By manipulating the vibration, they can change the shape, number and duration of these coherent pulses, and can also produce pairs of pulses.

Back to the bench

Bernhard Adams, a physicist at Argonne National Laboratory in Illinois, says that the experiment, which uses a bench-top source, rather than an intense light source, is “a curiosity” in its present form, but one that has the potential to become an important tool.

It could, for example, help to improve Mössbauer spectroscopy, a technique that uses gamma rays to probe the chemical composition and magnetic fields of some materials, he says. Conventional high-energy photon sources produce photons in a range of energies, which can overload the detectors and damage the sample material. Creating coherent gamma rays in this way could enable physicists to produce just the photons they need. “Technically, that’s a huge advantage,” he adds.

Adriana Pálffy, a physicist at the Max Planck Institute for Nuclear Physics in Heidelberg, Germany, says that coherent gamma rays could be used in quantum cryptography and communications. For quantum communications, gamma-ray photons would have advantages over optical and microwave photons, because their higher energies make them easier to detect, while their shorter wavelengths mean they could operate on even smaller scales.

The pulses could also be used to test the boundaries between the classical and quantum worlds, adds Pálffy. Whereas atoms show quantum behaviour, we do not see books or tables existing in two places at once, she says. But the double pulses of gamma rays produced by Kocharovskaya's team could be used to ‘entangle’ two microscopic samples of iron, Pálffy says. Unlike optical photons, gamma-rays are more penetrating and can reliably pass through space in order to entangle the samples. The two lives of the same gamma-ray photon — separated in the two pulses — could at simultaneously interact with nuclei in separate samples. The samples would then be entangled, both in a state of having interacted and not-interacted, like Schrodinger's both dead and alive cat.