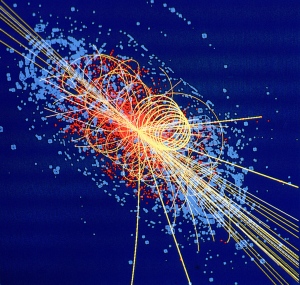 The Higgs boson may have played a key role in the early Universe, including the creation of mysterious dark matter.

A key riddle in cosmology may be answered by the 2012 discovery of the Higgs boson — now a leading contender for the 2013 Nobel Prize in Physics on 8 October.

Two physicists suggest that the Higgs had a key role in the early Universe, producing the observed difference between the number of matter and antimatter particles and determining the density of the mysterious dark matter that makes up five-sixths of the matter in the Universe.

In a paper accepted for publication in Physical Review Letters1, Sean Tulin of the University of Michigan in Ann Arbor and Géraldine Servant of the Catalan Institute for Research and Advanced Study in Barcelona, Spain, say that there may have been an asymmetry in the early Universe between the Higgs boson and its antimatter counterpart, the anti-Higgs.

“We really make the Higgs a key player, whereas in many other cosmological theories it's just a by-product,” says Tulin.

It is thought that the Higgs does not currently have an antiparticle, but the standard cosmological model allows for there to have been both Higgs bosons and anti-Higgs bosons in the very early Universe. Tulin and Servant’s idea is that there was an imbalance between the numbers of these particles. The Higgs interacts with ordinary matter, and that imbalance in the number of Higgs and anti-Higgs particles could have translated into an asymmetry in the amount of matter and antimatter.

The team has dubbed the idea Higgsogenesis, after baryogenesis, the name of an early-Universe process that has been proposed to create more baryons (particles including protons and neutrons) than antibaryons. “Higgsogenesis is an alternative,” says Tulin.

Tulin and Servant show that if the Higgs also interacted with dark matter — for example by generating dark-matter particles when it decays — it could produce a ratio of dark to visible matter that is just what we see in the Universe today. Servant says that one consequence of the Higgs interacting in this way would be a new potential test for dark matter, which has so far proven difficult to see directly. When the Higgs decays to other particles in the Large Hadron Collider at CERN, Europe's particle-physics laboratory near Geneva, Switzerland, it would occasionally form dark-matter particles that could not be detected. Higgs decays at the LHC have not yet been studied closely enough to tell whether this is happening, but could be in future, Servant says.

Other groups are also pursuing Higgsogenesis. In July, theorist Sacha Davidson of the University of Lyons in France and her colleagues uploaded a paper2 to the preprint server arXiv investigating what would be required to produce the asymmetry between the Higgs and anti-Higgs that would kick off Higgsogenesis in the early Universe. They found that a relatively simple theory — in which the standard model of particle physics includes all the normal particles, as well as two Higgs and one extra, unobservable Higgs-like particle — can produce an asymmetry of the type that Servant and Tulin propose.

Manoj Kaplinghat, a theoretical physicist at the University of California, Irvine, likes Tulin and Servant’s proposal because of its simplicity. “We know that the Higgs exists, we know there’s dark matter and matter–antimatter asymmetry, and they’re trying to put three empirical facts together,” he says. “It's a minimal approach and that makes it interesting.”