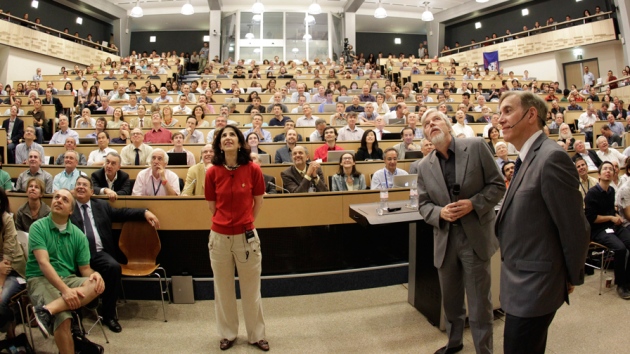 Many physicists here spent the night huddled in the hall so that they could secure a prized seat. By 8:00 a.m., the fire brigade was turning away bleary-eyed scientists who had queued for hours. The lucky few who made it inside the lecture theatre at CERN, Europe’s particle-physics laboratory near Geneva, Switzerland, witnessed the end of an epic quest in high-energy physics — and the start of a new campaign.

With the announcement on 4 July that they had found the Higgs boson, physicists unveiled the final piece of the standard model of particle physics: a theoretical framework that describes with pinpoint accuracy all fundamental particles and forces except gravity. Discovering the Higgs boson had been billed as the main goal of the Large Hadron Collider (LHC), a US$6-billion, 27-kilo­metre-circumference proton collider that, along with its four building-sized detectors, took thousands of physicists decades to assemble.

The discovery has given the machine a new mission: to pin down the properties of the Higgs boson. Researchers will also be scouring the data for hints of something beyond the standard model — a still-more comprehensive theory that could lead physicists towards a unified understanding of the Universe.

The greatest particle-physics discovery in a generation appeared as no more than a modest bump on a gently sloping plot (see ‘Bump of destiny’). Yet it drew a burst of applause as the two main experimental groups seeking the particle flashed their data onto the screen last week. The bump was the clear signal of a Higgs particle at a mass of around 125 gigaelectronvolts (mass and energy are used interchangeably in particle physics). Both the ATLAS and the Compact Muon Solenoid (CMS) detector groups reported that the significance of their signal was around five standard deviations — meaning that if the Higgs particle did not exist, there would be less than a one-in-a-million chance of getting these data by chance. 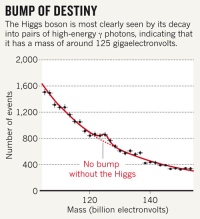 Theorist Peter Higgs himself was present for the announcement, as were three of the other physicists who first predicted the boson back in 1964: Gerald Guralnik, François Englert and Carl Hagen. “It’s really an incredible thing that it’s happened in my lifetime,” the 83-year-old Higgs told the crowd, choking back tears.

The Higgs boson is an expression of the Higgs field — the mechanism ultimately responsible for the mass of known particles (see ‘What is the Higgs?’). Evidence for the Higgs boson had been mounting for decades, says Tom Kibble, a retired physicist at Imperial College London, and another of the theorists responsible for the original prediction. The boson and field are needed in calculations to unify the electromagnetic and weak nuclear forces into a single ‘electroweak’ force, which in turn predicts the properties of other particles. Those predictions have matched measurements to high accuracy, he says. Never­theless, Kibble says, “there are quite a few things that we don’t know about it that have to be confirmed”.

The key quantity is the particle’s spin — a defining quantum-mechanical property. According to theory, the Higgs boson’s spin must be zero. Otherwise, says Kibble, the masses of fundamental particles could change according to their orientations in space. “Spin zero is key,” he says. If the particle turns out to have a non-zero spin, it would be a shocking discovery — and would mean that the particle would be something other than the Higgs.

What is the Higgs?

The Higgs boson has been making headlines, but it is the corresponding Higgs field that is the true prize. Such fields are a fundamental part of modern physics, permeating space and interacting with the particles that move through them — as a magnetic field causes iron filings to line up.

In comparison with electromagnetic and other fields, however, the Higgs field is “slightly odd”, admits Tom Kibble, one of six theoretical physicists who first invoked the mechanism in 1964. The field is both ubiquitous and directionless, much like the constant air temperature in every part of a still, silent cave. Particles that interact with the Higgs field gain mass — the more they interact with it, the heavier they become.

Kibble, Peter Higgs and others proposed the existence of the field to solve one of the toughest physics problems of the day. In the early 1960s, theorists knew that two of the four fundamental forces that govern the behaviour of particles were nearly identical mathematically. The main difference between them was that the particles associated with one force had mass, whereas those associated with the other did not.

The Higgs field explained the split. In the very early Universe, the theory goes, the Higgs field was zero, and the two forces were as one. But shortly after the Big Bang, the field assumed a non-zero value and the forces split apart. One, which became electromagnetism, is mediated by massless particles of light known as photons, which ignore the Higgs field. The other force became the weak nuclear force, which causes certain kinds of radioactive decay, and works through heavy particles called W and Z bosons. These interact with the Higgs field and gain mass. Ordinary matter derives most of its mass from subsequent interactions between particles such as quarks, found in the nuclei of atoms.

The Higgs boson itself can be thought of as an excited ripple in the Higgs field. Studying the boson’s properties at the Large Hadron Collider will tell theorists whether the field behaves as they expect.

The latest LHC results reveal enough about how the particle decays to indicate that it has a spin of either zero or two. Further studies of the direction in which the particle’s decay products fly out of the LHC will pin down the spin, says Joe Incandela, the spokesman for the CMS detector. Incandela is hoping for an answer by the end of the year. Steve Myers, who oversees the operation of the LHC, says that the 2012 run of the collider is being extended by three months so that the experiments can collect more data.

For the most part, the new particle matches the standard model’s predictions of how it should decay into other particles. But there are some intriguing hints that this Higgs may not be entirely standard in character. For one thing, it seems to decay into pairs of photons about twice as often as the standard model predicts — and it decays less often than expected into particles known as taus and W bosons. Such discrepancies are far from being statistically significant right now, but if the evidence grows as more data are gathered, they could point to physics beyond the standard model.

For example, it may be that the detected boson is actually a composite, made up of smaller particles, or that it is the first of a new class of bosons — a ‘Higgs family’. “I would be delighted if this new state is a Higgs boson, but perhaps not the standard-model Higgs boson,” said Fabiola Gianotti, spokeswoman for ATLAS, at a press conference following the presentation of the results. Incandela thinks that by the end of the year, the experiments should have strong indications of whether the Higgs completely matches the standard-model predictions.

Even if the Higgs behaves as expected, its mass is a puzzle. According to standard-model calculations, the Higgs should be very heavy and unstable — unless a large and improbable correction is applied to the equations. A theory known as supersymmetry, embraced by many physicists, predicts a lighter Higgs, says Matthew Strassler, a theoretical physicist at Rutgers University in Piscataway, New Jersey. But so far, no signals of supersymmetry have shown up inside the LHC. Moreover, the mass of 125 GeV in the reported data is too heavy for the simplest supersymmetric models.

As the collider continues to smash protons beneath the hills of Switzerland and France, physicists hope that hints of the answers will emerge from the terabytes of data. “We’re probing something that our theories can’t handle,” says Incandela. “What’s great about having the particle is that we now have the source of the problem in our laboratory.”