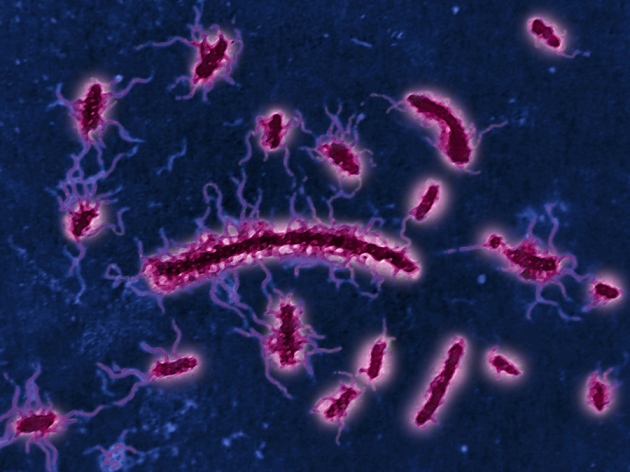 An estimated 22 million people are infected each year with a variant of Salmonella bacterium that causes typhoid.

An antibiotic-resistant strain of typhoid bacterium is driving a previously unrecognized epidemic in Africa, researchers report on 11 May in Nature Genetics1.

Typhoid, which is caused by a variant of Salmonella known as Typhi, remains a major health threat in developing countries, particularly in areas with poor sanitation. The US Centres for Disease Control and Prevention estimates that there are 22 million cases of the disease each year worldwide.

The situation is particularly acute in Africa, where the number of infections is rising and resistance to older antibiotics, such as penicillin or drugs based on sulfonamide, is growing. One particularly striking report comes from Blantyre, Malawi, where 782 cases of typhoid were identified last year, up from an average of just 14 per year between 1998 and 20102. The proportion of infections that were resistant to multiple antibiotics jumped from 7% to 97% over the same period.

To trace the source of these infections, a team led by Vanessa Wong, an infectious-disease specialist at the Wellcome Trust Sanger Institute in Hinxton, UK, sequenced the genomes of more than 1,800 S. Typhi samples from 63 countries. A culprit quickly emerged: an S. Typhi strain known as H58 comprised 47% of the researchers’ samples, and showed widespread resistance to a number of antibiotics.

Comparing the genomes of the H58 samples suggests that the strain originated in south Asia 25 to 30 years ago, before spreading to the Middle East and the Pacific Islands. The bacteria also jumped multiple times from Asia into East Africa, and then spread into southern Africa through trade routes.

Wong and her colleagues say that drug-resistant H58 is most common in areas where older antibiotics are frequently used against typhoid, suggesting that overuse of such drugs has helped to drive the epidemic in Africa.

Although health workers have known about the rising number of typhoid cases in Africa for some time, the epidemic of antibiotic-resistant cases was not apparent until now. “People locally were noticing high typhoid rates, but they didn’t realize it was a problem in lots of other countries,” says Wong. “We were able to link all the dots together.”

Mark Achtman, a microbiologist at the University of Warwick in Coventry, UK, says that the situation may have escaped the notice of clinicians in affected areas because typhoid is difficult to distinguish from other diseases that cause fever, such as malaria. To confirm a typhoid diagnosis, physicians must collect and culture bacteria from the infected person, a process that takes days and is not always feasible in developing countries.

Wong says that researchers are also starting to see cases of H58 that resist treatment with newer antibiotics, such as fluoroquinolones and azithromycin. Eventually, she says, clinicians will run out of options. Wong’s team now hopes to discover why H58 has been able to outcompete other S. Typhi strains and spread so widely.

Without that information, researchers and clinicians may have difficulty in addressing the African typhoid epidemic, says Achtman. There are vaccines for typhoid, but they are effective for only a short time and are not widely administered. With the disease resurging in Africa, he adds, it might be a good idea to start testing the effectiveness of the vaccines in affected populations.