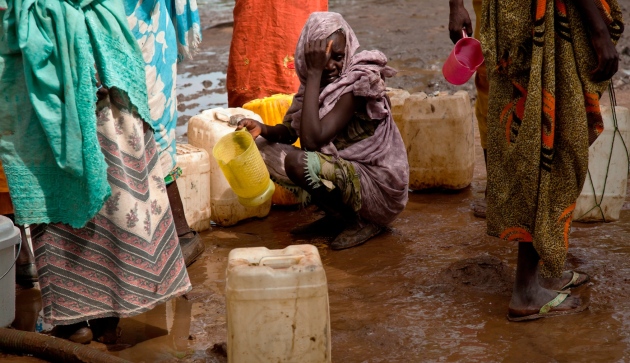 Poor sanitation at the Yusuf Batil refugee camp in South Sudan caused an outbreak of hepatitis E earlier this year.

Batches of the world’s first vaccine against the hepatitis E virus began rolling out of a Chinese factory last week, promising to stem a disease that every year infects about 20 million people and claims 70,000 lives. The vaccine is being hailed as a victory for an unusual public–private partnership that could set a precedent in China’s burgeoning biotechnology sector, and help to deliver other vaccines for diseases overlooked in the West.

The waterborne hepatitis E virus mostly occurs in developing countries that have poor sanitation, and it is particularly prevalent in east and south Asia. Although most cases cause only mild illness, it can lead to acute liver failure — the mortality rate reaches 4% in some regions and soars to 20% in women who are in the later stages of pregnancy. A severe outbreak of hepatitis E in the Xinjiang Uygur Autonomous Region in northwest China1, for example, caused almost 120,000 infections and more than 700 deaths between 1986 and 1988 (see ‘Hidden epidemics’). There is no treatment, and improved sanitation has so far been the most effective way to stem the disease.

The new vaccine, which was approved by China’s State Food and Drug Administration (SFDA) in December 2011, could transform that picture. More than a decade ago, researchers at Xiamen University in Fujian province genetically modified a strain of the bacterium Escherichia coli to produce a protein that, when injected into humans, stimulates the body’s immune system against hepatitis E. But preclinical and clinical development began in earnest only in 2000, when the Yangshengtang Group, a company with interests in food and health care, invested 15 million renminbi (US$1.8 million in 2000) to set up a joint biotech laboratory in partnership with the university. The lab was given national status in 2006 by the Chinese Ministry of Science and Technology and relaunched as the National Institute of Diagnostics and Vaccine Development in Infectious Diseases (NIDVD). 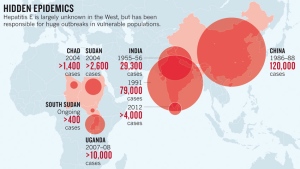 The institute aims to unite academia and industry in commercializing new vaccines, particularly for emerging infectious diseases. Yangshengtang set up a subsidiary company called Innovax to take potential vaccines through clinical trials to manufacturing. The hepatitis E vaccine, Hecolin, is the company’s first product to reach the market, but it also has a vaccine against human papilloma virus that is currently in preclinical research. Approval for Hecolin came after a phase III clinical trial published in 2010 showed that it was highly effective in preventing infection among almost 100,000 healthy participants2.

Hecolin cost about 500 million renminbi (US$80 million) to develop, much of which came from the Chinese government through the university. The vaccine will be sold to distributors in China at a cost of 110 renminbi per dose, and the company expects it to reach sales of 62 million renminbi in 2013. That is hardly a blockbuster income, but, according to Jun Zhang, deputy director of the NIDVD, the public–private development model helps to ensure that vital vaccines are developed regardless of whether they prove to be profitable for manufacturers.

Zhang hopes that the success of Hecolin will attract further investment in such schemes, and says that the Chinese government has been encouraging. “Many people — including representatives of multinational pharmaceutical companies, venture capitalists, Chinese local government officials and Chinese entrepreneurs — think this is a worthy example of biotechnology investment,” he says.

Zhang points out that UK drug-maker Glaxo­SmithKline had already developed a separate hepatitis E vaccine in collaboration with the US Army, which showed promise in phase II trials3. But with hepatitis E mostly occurring in developing countries, there was little commercial potential for the vaccine. “This is true not just of hepatitis E, but also many other plagues in the world,” says Zhang.

Medical products for conditions such as hepatitis E that predominantly affect the developing world “are not seen as big money opportunities”, agrees Jeremy Farrar, director of the Oxford University Clinical Research Unit in Ho Chi Minh City, Vietnam. “New companies operating with different funding models offer a great opportunity, and one which could have a profound impact.”

Hecolin may have arrived just in time to tackle a rise in hepatitis E in Africa, where a 2007 outbreak4 in Uganda infected more than 10,000 people and killed 160. By the end of September this year, more than 200 cases of jaundice caused by hepatitis E had been reported in refugee camps in Kenya since August, and three refugee camps in South Sudan have seen 16 deaths and 400 cases of hepatitis E infection since July. “Cases are rising day by day, thus placing immense pressure on the available health services and resources. This is of grave humanitarian concern,” said South Sudan’s health ministry in a statement in September.

Xiamen University and Innovax are in talks with the World Health Organization (WHO) to register Hecolin with the organization’s Prequalification Programme, which makes medicines available to agencies such as the United Nations Children’s Fund and the Joint UN Programme on HIV/AIDS. “We have to be sure that these vaccines can be used anywhere,” says Farrar. “It would be a great shame if these products were not available outside China.”

“We have to accept that companies such as this one in China are going to be very important in the future,” he adds. “The rest of us have to catch up. We need to find a way, through the WHO, of ensuring the absolute transparency, safety and effectiveness of their vaccines.”