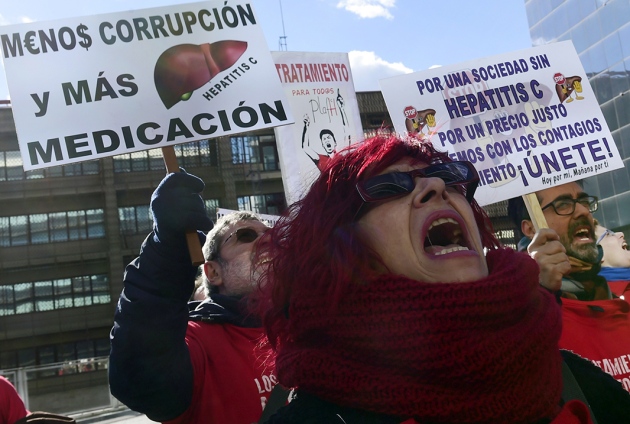 People in Madrid demonstrate against the high price of hepatitis C drugs.

The liver disease hepatitis C is the new battleground for lawsuits intended to slash the cost of life-saving medicines. In February alone, five suits were filed in India and Argentina claiming that the latest class of antiviral drugs does not warrant the 20-year patent monopoly that manufacturers have sought in those countries.

In the 2000s, successful challenges to patents on HIV drugs gave poor nations access to high-quality ‘generic’ copies of the medications at rock-bottom prices. Now, buoyed by that success, activists are applying the same strategy to a fresh wave of hepatitis C drugs. They note that the standard 12-week course of treatment costs more than the average annual salary for millions of people in middle-income countries.

Public-health experts say that expanding access to the drugs would have immediate benefits. Roughly 177.5 million adults worldwide are infected with the hepatitis C virus, which can cause liver cancer and cirrhosis if left untreated — but the latest antiviral medications have revolutionized care. The first to reach the market was sofosbuvir, sold under the name Sovaldi by Gilead Sciences of Foster City, California; clinical trials of the drug in combination with other medications have shown a cure rate of 95% or more. “If these medicines were made widely available, you could make a plan to eliminate this disease,” says Brook Baker, a law specialist at Northeastern University in Boston, Massachusetts.

As the world’s main supplier of generic drugs, India is at the centre of the current patent fight. Patient advocates celebrated when the country’s patent office rejected Gilead’s application for a basic patent on sofosbuvir in January 2015, on the grounds that it was not scientifically inventive enough to warrant exclusivity, despite its clear medical advantages. But an Indian court overturned the decision last May — and that verdict in turn is now being contested.

Four of the lawsuits filed in February target other Indian patents on sofosbuvir and two related drugs, Gilead’s velpatasvir (sold in combination with sofosbuvir under the name Epclusa) and Daklinza (daclatasvir) from Bristol-Myers Squibb in New York City. The fifth challenges Gilead’s application to patent sofosbuvir in Argentina.

“The science behind sofosbuvir doesn’t merit these patents,” says Tahir Amin, director of the Initiative for Medicines, Access and Knowledge in New York City. The activist group is involved in a dozen ongoing lawsuits related to patents for hepatitis C drugs — including the cases in India and Argentina, and others in Brazil, the European Union, Egypt and Ukraine.

“This battle is about trying to ensure that Gilead has the shortest possible monopoly.”

Some of the suits argue that sofosbuvir, velpatasvir and daclatasvir are not sufficiently inventive to warrant a patent. Others challenge Gilead’s attempts to obtain additional patents on sofosbuvir by modifying it slightly, to extend the company’s intellectual-property rights — a practice called evergreening. “This battle is about trying to ensure that Gilead has the shortest possible monopoly,” says Leena Menghaney, who runs a drug-access campaign in South Asia for the charity Médecins Sans Frontières, which is supporting the lawsuits.

Gilead notes that it has taken steps to reduce the cost of its antiviral medications for hepatitis C — offering tiered pricing for sofosbuvir and other drugs, on the basis of factors such as a nation’s economic status and the volume of medicine that it requires. The list price for a 12-week course of sofosbuvir is US$84,000 in the United States, $50,000 in Turkey and Canada, about $6,000 in Brazil and just $900 in Egypt.

Gilead has also licensed 11 manufacturers in India to produce cheaper generic versions of its hepatitis C drugs for sale in 101 developing countries. The generic medications retail for $300–$900 per treatment course in countries where they are permitted; in return, Gilead receives a 7% royalty payment to keep its access-to-medicines programme running.

This system draws on lessons that Gilead learnt during lawsuits and protests over access to HIV medications in the early 2000s, says Clifford Samuel, Gilead’s senior vice-president of access operations and emerging markets. “We got a tremendous amount of criticism in the early days of our HIV programme, and it refined us,” he says.

But that does not appease Amin, who says that Gilead’s deals with generic-drug manufacturers do not reduce the cost of its hepatitis C medications in middle-income countries. One analysis published last year found that sofosbuvir and related drugs are too pricey for those nations (S. Iyengar et al. PLoS Med. 13, e1002032; 2016). Using these drugs to treat every person infected with hepatitis C in Poland would cost 1.6 times the country’s annual expenditure on medicines for all conditions. The price of one course of treatment is equal to about six years of earnings for the average Pole.

Gilead intends to protect its patents in high- and middle-income countries, while working to improve access to drugs through discounts and tiered pricing. “We need revenue to put back into the development of drugs for other diseases,” Samuel says.

The company has already recouped its original investment in sofosbuvir. It acquired the drug in 2011 when it bought Pharmasset, a biotechnology company in Princeton, New Jersey, for $11.2 billion. Since sofosbuvir hit the market in 2014, the drug and two similar medications have earned Gilead $46 billion.

Menghaney expects the first hearings in the new wave of patent lawsuits to come in six months to a year. But she’s already looking to new frontiers. “I hope these battles in developing countries lead people to challenge weak patents and evergreening patents in the United States,” she says.