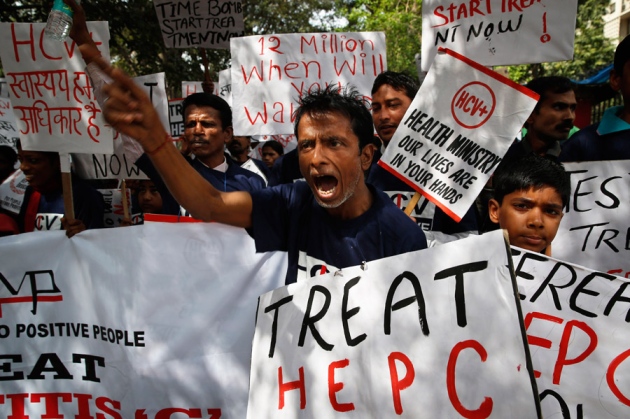 Campaigners in India have been calling for access to cheap hepatitis C treatments.

The publication last week of the first treatment guidelines for hepatitis C virus (HCV), and the advent of drugs that can cure most infections of the virus, have left public-health researchers with a touch of déjà vu.

Three decades after wrestling to lower the cost of AIDS drugs (prices fell from about US$10,000 per patient per year in the 1990s to less than $100 in the mid-2000s), they are once again asking how expensive life-saving medicines can be made affordable for patients.

“We’ve been here before,” says Stefan Wiktor, head of the global hepatitis programme at the World Health Organization (WHO) in Geneva, Switzerland, and lead author of the guidelines (see go.nature.com/bwhguw). And a similar success could follow, adds Andrew Hill, a pharmacologist at the University of Liverpool, UK, “if there’s the political will to do it”.

Discovered in 1989, HCV infects an estimated185 million people worldwide, more than 80% of whom live in low- and middle-income countries (see ‘Viral load’). Around 15% of Egypt’s population, for example, is infected. The blood-borne virus is a leading cause of liver cancer and cirrhosis.

Most of these HCV cases had been ignored, mainly because available treatments did not work well and were relatively expensive. The combination of an antiviral drug, ribavirin, and an immune-system modulator called interferon cures less than 50% of patients after a year, while causing fatigue, nausea and even depression.

But that is now set to change. First, a new breed of HCV medicine that directly attacks the virus — approved by US and European regulators in 2011 — pushed cure rates to around 75%, although it did not fully eliminate the need for the ribavirin–interferon therapy. And in recent months, regulators have approved two drugs that can cure most HCV infections after three months and do not require interferon in many cases.

But the pricing of these new drugs has raised eyebrows even in Western countries, where private health insurers and public health-care systems tend to bear the costs of drugs. Sofosbuvir, made by Gilead Sciences in Foster City, California, debuted last December at $1,000 a pill — $84,000 for a 12-week course. And Janssen Pharmaceuticals, based in Beerse, Belgium, has priced its simeprevir at $66,000 for the same treatment period. Those prices are a non-starter for low- and middle-income countries. But it is not clear how the price will fall to a level that such countries can afford, says Wiktor.

Antiretroviral drugs that keep HIV in check reached less-wealthy countries only after pressure from non-governmental agencies, academics and patients. Generic-drug manufacturers showed that they could make the medicines cheaply, and funders such as the Global Fund to Fight AIDS, Tuberculosis and Malaria stepped in to pay for them. Some countries, such as Brazil and Thailand, even issued ‘compulsory licences’ to manufacture generic versions of HIV drugs, effectively ignoring patents.

These options will be open to HCV drugs, says Wiktor. “Competition and generic production really are the keys to reductions in prices.”

In March, Gilead announced a deal with Egypt to provide sofosbuvir at $900 for a 12-week course. “I think it’s an excellent first step, but it’s only a first step,” says Hill. He adds that treating every case of HCV in Egypt would far outstrip the country’s annual health-care budget of around $4.5 billion.

Gregg Alton, executive vice-president of corporate and medical affairs at Gilead, says that the company is in negotiations with several Indian manufacturers to produce a generic version of sofosbuvir. But, according to a report from the Paris-based charity Médicins du Monde, the generic drug would be available to 60 mostly low-income countries, and not to many middle-income countries with high HCV burdens. Meanwhile, the Initiative for Medicines, Access & Knowledge, a non-profit group in New York, has filed a lawsuit with India’s patent office seeking to prevent Gilead from receiving a patent for sofosbuvir.

Cheap generic HCV drugs are within reach. In an analysis published in February in Clinical Infectious Diseases, Hill and his team compared the cost of producing generic HIV medicines and applied this analysis to the potential cost of HCV drugs (A. Hill et al. Clin. Infect. Dis. 58, 928–936; 2014). They estimate that generic-drug manufacturers should be able to produce the pills at $100–250 for a 12-week course. But even at those prices generic manufacturers won’t manufacture HCV medicines until there is large demand, Hill says.

Major donors have not yet signalled their intention to pay for the drugs. Geneva-based UNITAID welcomed the new WHO guidelines, but noted that access to drugs will depend on the development of cheap diagnostics. “It’s possible it’s really going to be up to the countries to fund their own programmes, which is really going to be a limiting factor,” says Wiktor.

Jennifer Cohn, medical director of the drug-access programme for the charity Médecins Sans Frontières in Geneva, notes that middle-income countries face the highest hurdles. Increasingly, inter­national donors are withdrawing support from these countries, and drug makers such as Gilead are likely to see them as untapped markets for their products and thus exclude them from generic licensing deals.

Cohn says that these countries should consider compulsory licensing, just as some countries did for HIV drugs. This practice is sanctioned by the World Trade Organization in certain cases — for example, to ensure affordable medicine prices — to protect public health.

But cost is not the only barrier. Most countries’ health systems are not equipped to widely diagnose the disease or deliver the drugs. Wiktor says that it will be a missed opportunity if the global health community does not work out how to get the drugs to patients. “People are dying from liver cancer, from cirrhosis,” he says, “and these deaths can be prevented.”