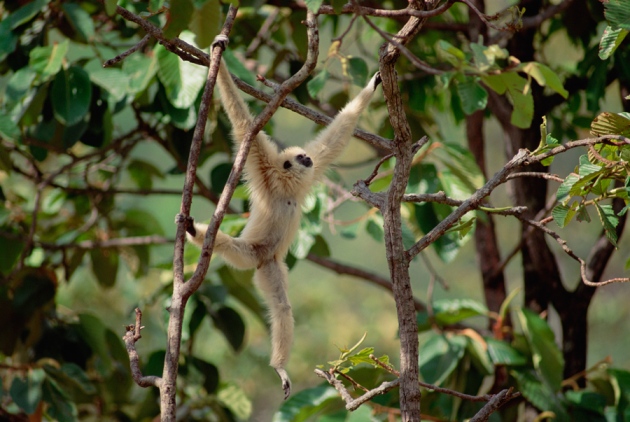 Gibbons use similar vocal techniques to human opera singers to ensure their calls are heard throughout the forest.

Apes are unlikely to become virtuosos at the opera house, but gibbons have naturally mastered some of the vocal techniques that human sopranos rely on, scientists in Japan report.

Gibbons have a distinctive and tuneful call that can penetrate two kilometres through their dense forest habitats. Takeshi Nishimura at Kyoto University's Primate Research Institute in Inuyama and his colleagues used an unlikely setting to investigate the vocalizations the creatures use to do so — they put a white-handed gibbon (Hylobates lar) in a large box containing 50% helium gas.

The research, published today in the American Journal of Physical Anthropology1, shows that, like humans, gibbons use a ‘source–filter’ mode of sound generation. The sound originates from the creatures' vocal folds as a mixture of different harmonics, which are multiples of the frequency at which the vocal folds vibrate. The resonant frequencies of the vocal tract then determine which of these harmonics are projected. By altering the position of the mouth, lips and teeth, humans vary these resonant frequencies to make the different sounds required for speech.

By recording the gibbon in a helium-rich atmosphere, the scientists were able to separate the different contributions that the vocal folds and vocal tract made to its calls. Helium doesn’t alter how the vocal folds vibrate but does shift the vocal tract’s resonant frequencies, which is why it makes human voices sound like Donald Duck.

Hear a recording of a normal gibbon call followed by one made after the ape has been breathing helium.

The gibbon’s melodious calling bears many similarities to the techniques of human singers. Like professional sopranos2, 3, gibbons tune the resonant frequency of their vocal tract to the pitch frequency generated by the vocal folds to amplify the sound. Acoustic physicist Joe Wolfe of the University of New South Wales in Sydney, Australia, says that this type of “resonance tuning” is something that comes fairly easily to human singers and is key to their ability to project their voice over a loud orchestra.

Cognitive biologist Tecumseh Fitch at the University of Vienna is amazed that such an experiment has been done with something as large as a gibbon. “One thing that’s audacious is that they even did this!” he says. He believes that this work demonstrates that “science is converging on a model for how all animals make sounds”.

The finding supports the view that human speech depends less on unique modifications to the anatomy and physiology of the vocal apparatus than was once thought, suggests Nishimura. It seems that humans are not all that special in the way we make sounds — only in the way we arrange them into language.