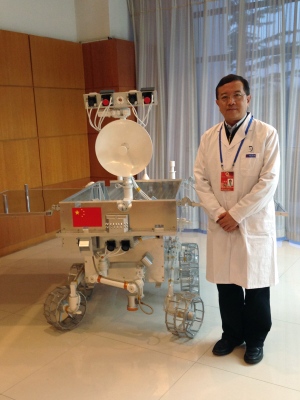 As director-general of the Chinese Academy of Sciences' National Space Science Center, Wu Ji is in charge of the scientific component of the Chang'e-3 lunar programme.

As a rising space power, China is placing increased emphasis on basic research. Last week, scientists from the European Space Agency (ESA) and the Chinese Academy of Sciences (CAS) gathered in Chengdu to plan their first joint scientific space mission. Wu Ji, director-general of CAS’s National Space Science Center in Beijing and a co-chair of the meeting, talked about China’s space ambition, the importance of international collaboration and why a space race between China and the United States is unlikely.

Could you give us an overview of China’s current space science?

China’s space programme has a very strong engineering and application focus, but basic research lags behind and still doesn’t have a regular budget or long-term mandate. Before the recent Chang’e-3 lunar programme [launched in December 2013], China’s only space-science missions were Double Star for studying magnetic storms and the ill-fated Mars probe Yinghuo-1.

The current [national space-science] budget covers five new projects. Next year, we will launch our first astronomy satellite, the Hard X-ray Modulation Telescope. Other missions in the near future include a satellite for ‘teleporting’ entangled photons from space to receivers on Earth; Kuafu for studying space weather; Shijian 10 for testing the effects of radiation and microgravity on materials; and another spacecraft to probe dark matter.

What are China’s polices regarding international collaboration in space science?

We have an open-door policy, and would love to work with the best scientists in the world — wherever they are based. Space science is an extremely costly enterprise and the budgets will always be limited. Only by working together and coordinating efforts on a global scale can we avoid overlapping projects and make the most out of scarce resources.

This policy is not new. Both of the earlier space-science missions had a strong component of international collaboration: Double Star was a joint mission between China's National Space Administration and ESA, and Yinghuo-1 was launched through the Russian Phobos-Grunt mission — although the spacecraft failed to leave Earth’s orbit.

What are the main initiatives in your international collaborations at the moment?

Of the missions mentioned above, we are collaborating with several European nations in calibrating the Hard X-ray Modulation Telescope; developing silicon detectors for probing dark matter; and testing cross-continental quantum key distribution [which uses quantum mechanics to guarantee secure communication]. There will also be European experiments on board the spacecraft Shijian 10.

Our collaboration with NASA came to a halt when a spending bill was passed in the United States in 2011 that prevents the agency from using federal funds on joint projects with China. But we still collaborate with US scientists who have grants from other sources. We are planning a series of joint workshops with the Space Studies Board of the US National Academy of Sciences' National Research Council. This is an attempt to maintain grass-roots academic interaction between space scientists from the two countries, when the relationship at the government level is experiencing difficulties.

In which broad areas will ESA and CAS collaborate?

It’s entirely up to the scientists to decide which areas they want to work in. They can pick any topics as long as they do not overlap with existing or planned missions, such as lunar or Mars programmes. Possible avenues of collaboration include joint missions, joint development of scientific instruments, piggy-backed launches of instruments on self-planned missions, and data acquisition. When China’s space station goes into operation, it will open up new horizons of cooperation between ESA and CAS.

Some think that the Chang’e-3 mission provides an opportunity for China and NASA to collaborate. How has that been going?

It is indeed a wonderful opportunity. The landing of the Change’e-3 spacecraft on the Moon kicked up a lot of dust over a landscape that had already been carefully surveyed by NASA’s two Moon orbiters, the Lunar Reconnaissance Orbiter and the Lunar Atmosphere and Dust Environment Explorer. This is a perfect controlled experiment — by coincidence rather than by design — to study the composition of lunar dust and atmosphere, but it will require data exchange between the two countries. China is eager to collaborate, but nothing has come through from the US side because of the 2011 spending bill.

Will the world see a space race between China and the US, reminiscent of that between former Soviet Union and the US in the Cold War?

I don’t think so. China’s goal is to follow its own path in developing a space programme catered to the country’s development needs, rather than to compete with anybody. For instance, we have launched more than 100 satellites for applications such as navigation, weather forecasting, land surveys and pollution management. Now, we are stepping up efforts to advance our knowledge in space science. China’s overall budget in space programmes is still rather moderate compared with that of the United States, and we are keen to work with our colleagues around the world.

China will have its own space station by 2020. How do you view its relation with the 16-nation International Space Station?

China has long expressed its interest in participating in the International Space Station, but has always been vetoed by the United States. This was why we decided to build our own space station, including the manned laboratory Tiangong [meaning Heavenly Palace]. The station is open to international collaboration, and we have already conducted space experiments with our European colleagues. In addition, having two space stations in different orbits will provide an excellent opportunity to probe our Universe on unprecedented levels — if we work together.