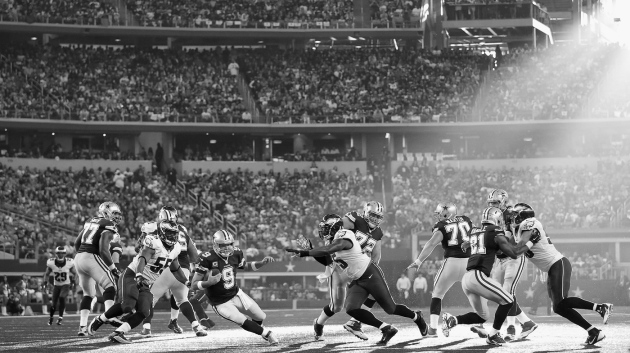 A study of brain injuries in American footballers must refocus minds on concussion in sport.

“Try not to lose your head,” could — quite literally — have been all the medical advice needed for ancient Mayan ball players, for whom losing the game could have resulted in ritual sacrifice. But sport has evolved, and so has science. Modern athletes might not fear outright decapitation, but it’s become abundantly clear that they do need to worry about the state of their minds. Although the powers that be in major sports organizations have been woefully slow to acknowledge the problem, let alone address it, a growing body of evidence suggests that even routine rattling of the head can have lasting impacts on the brain.

The good news is that attitudes are starting to change. After years of seemingly wilful ignorance, sports authorities have bolstered their educational efforts and altered rules to make games safer. In the United States, the National Football League is experimenting with a rule that results in gridiron footballers’ ejection should they commit a pair of dangerous fouls, and college football players are already being sent off for ‘targeting’ offences. World Rugby is testing new rules to make its games safer, and in Australia, the National Rugby League has introduced a trial involving independent-doctor evaluations when players take a bang to the head.

Whether these and other measures will be enough is doubtful. What is clear is that we are only beginning to understand the extent of the harm that modern-day gladiators can sustain. In a study published on 25 July in the Journal of the American Medical Association, researchers conducted a posthumous analysis of 202 American-football players who took part in a brain-donation programme (J. Mez et al. J. Am. Med. Assoc. 318, 360–370; 2017). The scientists were looking for signs of chronic traumatic encephalopathy (CTE) — a degenerative brain disease — and they found it in 177 players. Among the 111 players from the National Football League, all but one tested positive for CTE. The tests also came out positive in 91% of college-level players and in 21% of those who played only at high school. The consequences were evident, particularly in the 84 players with severe CTE: 95% had exhibited cognitive symptoms, and 85% had shown signs of dementia. The study may not be statistically representative of all American-football players, but the results nonetheless speak for themselves.

Last month, representatives from several of the most violent contact sports — rugby, ice hockey, American football and Australian-rules football — gathered in Dublin to discuss ways of preventing and treating head injuries. Sports officials were there to discuss the implementation of recommendations issued in April by the international Concussion in Sport Group, which has reviewed more than 60,000 studies since its inception in 2001. The upshot is a detailed guidance document focused on diagnosis and treatment, but the group nonetheless acknowledged a daunting grey area in which sports medics — and individual athletes — must continue to make their own judgements.

Science can help society to understand the problem. It can even provide better tools to help coaches and doctors diagnose brain injuries, particularly among young people who are less likely to recognize the inherent dangers of the sports they are playing. A study published in Scientific Reports last December, for instance, suggests that it may be possible to accurately diagnose concussion using a simple brain scan that focuses on how the brain processes sound (N. Kraus et al.Sci. Rep. http://doi.org/f9kfk7; 2016). But it seems unlikely that high-contact sports will ever be truly safe; nor are they likely to disappear any time soon. In this respect, science’s most important contribution has been to shine a light on the problem.

Sports organizations can no longer claim ignorance, and neither can players. The pernicious macho culture that leads to players who suffer head injuries being patched up and sent back onto the field belongs — just like the sometimes-lethal Mayan game of pok-ta-pok — in the past. And managers, coaches and administrators who fail to accept this have no place in modern sport.