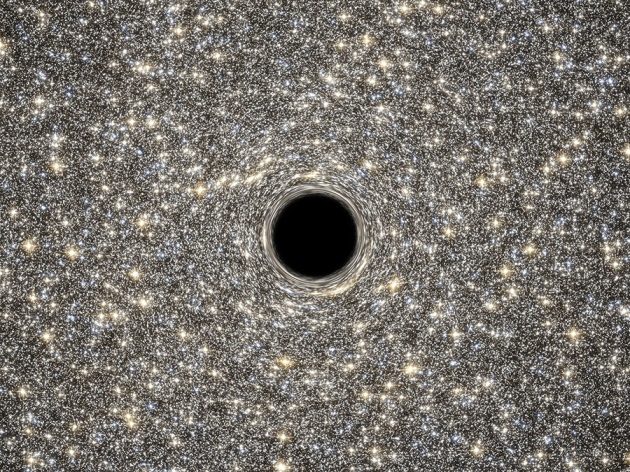 A black hole, visualized here in the M60-UCD1 galaxy, was thought to lose information as it disappears.

Almost a month after Stephen Hawking and his colleagues posted a paper about black holes online1, physicists still cannot agree on what it means.

Some support the preprint’s claim — that it provides a promising way to tackle a conundrum known as the black hole information paradox, which Hawking identified more than 40 years ago. “I think there is a general sense of excitement that we have a new way of looking at things that may get us out of the logjam,” says Andrew Strominger, a physicist at Harvard University in Cambridge, Massachusetts, and a co-author of the latest paper.

Strominger presented the results on 18 January at a crowded talk at the University of Cambridge, UK, where Hawking is based.

Others are not so sure that the approach can solve the paradox, although some say that the work illuminates various problems in physics. In the mid-1970s, Hawking discovered that black holes are not truly black, and in fact emit some radiation2. According to quantum physics, pairs of particles must appear out of quantum fluctuations just outside the event horizon — the black hole’s point of no return. Some of these particles escape the pull of the black hole but take a portion of its mass with them, causing the black hole to slowly shrink and eventually disappear.

In a paper3 published in 1976, Hawking pointed out that the outflowing particles — now known as Hawking radiation — would have completely random properties. As a result, once the black hole was gone, the information carried by anything that had previously fallen into the hole would be lost to the Universe. But this result clashes with laws of physics that say that information, like energy, is conserved, creating the paradox. “That paper was responsible for more sleepless nights among theoretical physicists than any paper in history,” Strominger said during his talk.

The mistake, Strominger explained, was to ignore the potential for the empty space to carry information. In their paper, he and Hawking, along with their third co-author Malcolm Perry, also at the University of Cambridge, turn to soft particles. These are low-energy versions of photons, hypothetical particles known as gravitons and other particles. Until recently, these were mainly used to make calculations in particle physics. But the authors note that the vacuum in which a black hole sits need not be devoid of particles — only energy — and therefore that soft particles are present there in a zero-energy state.

It follows, they write, that anything falling into a black hole would leave an imprint on these particles. “If you’re in one vacuum and you breathe on it — or do anything to it — you stir up a lot of soft gravitons,” said Strominger. After this disturbance, the vacuum around the black hole has changed, and the information has been preserved after all.

The paper goes on to suggest a mechanism for transferring that information to the black hole — which would have to happen for the paradox to be solved. The authors do this by calculating how to encode the data in a quantum description of the event horizon, known whimsically as ‘black hole hair’.

Astrophysics: Fire in the hole!

Still, the work is incomplete. Abhay Ashtekar, who studies gravitation at Pennsylvania State University in University Park, says that he finds the way that the authors transfer the information to the black hole — which they call ‘soft hair’ — unconvincing. And the authors acknowledge that they do not yet know how the information would subsequently transfer to the Hawking radiation, a further necessary step.

Steven Avery, a theoretical physicist at Brown University in Providence, Rhode Island, is sceptical that the approach will solve the paradox, but is excited by the way it broadens the significance of soft particles. He notes that Strominger has found that soft particles reveal subtle symmetries of the known forces of nature4, “some of which we knew and some of which are new”.

Other physicists are more optimistic about the method’s prospects for solving the information paradox, including Sabine Hossenfelder of the Frankfurt Institute for Advanced Studies in Germany. She says that the results on soft hair, together with some of her own work, seem to settle a more-recent controversy over black holes, known as the firewall problem. This is the question of whether the formation of Hawking radiation makes the event horizon a very hot place. That would contradict Albert Einstein’s general theory of relativity, in which an observer falling through the horizon would see no sudden changes in the environment.

The quantum source of space-time

“If the vacuum has different states,” Hossenfelder says, “then you can transfer information into the radiation without having to put any kind of energy at the horizon. Consequently, there’s no firewall.”